Edmond (Biff) Burns stands by the site he owns in Wicomico County, MD, where a new storage tank will contain residuals from poultry processing. Burns said the tank would be made of glass-fused metal to prevent harm to the environment. Bay Journal photo by Jeremy Cox

Lynette Kenney loves many things about living in the back country of Wicomico County on Maryland’s Eastern Shore: the friendly neighbors, the wind-swept cornfields, the relative quiet compared with the bustle of Salisbury, the nearest city of any size.

Not on that list: the 3-million-gallon, open-air storage tank filled with foul-smelling ooze coming to her neck of the woods in December.

The 23-foot-tall tank will contain an oily slurry culled from the wastewater generated by two poultry industry facilities in a neighboring county. Kenney fears the odor will drive her indoors, attract hordes of flies and cause the value of nearby properties, including hers, to plummet.

She is one of dozens of residents who have fought the project since they learned about it last spring. Within weeks, they organized community meetings, hired an attorney and began circulating a petition — all unusual actions in an area accustomed to farm life.

“We’ve lived out here for 43 years,” Kenney said, “and I’ve never once complained about anything agricultural.”

The backlash to the storage tank shines an uncomfortable spotlight on a substance that the poultry industry calls “residuals” and others call “industrial waste.” For decades, the slurry has been stored in tanks or former manure lagoons until spread with little fanfare on farmland to help crops grow — until now.

Poultry house slurry contains the nutrients nitrogen and phosphorus, which fuel algae blooms that lead to fish-killing “dead zones” in the Chesapeake Bay. Its use in Maryland is regulated by nutrient management plans that farmers are required to create, file and follow.

But Maryland agricultural officials have little information on how much slurry is spread on farm fields or its effects downstream.

“It’s just now coming to a head,” said Jon Moyle, a poultry specialist at the University of Maryland extension center in Wicomico County. “I think we’ve had a change in the communities. We’re having a lot more people living out in rural areas than in the past.”

The outcry in Wicomico prompted the county council on Nov. 5 to approve a six-month halt on permitting such tanks. The council plans to use that time to consider tougher zoning laws.

“I’m not happy about a moratorium, especially on anything related to our farming community,” councilmember Joe Holloway said during an earlier hearing. “But I understand the issues that we’re having.”

The moratorium won’t affect the tank near Kenney’s home. The project was awarded its building permit last May, and construction was well under way as of mid-October.

At that time, the site consisted of a 50-foot-wide circle of gravel next to a row of freshly cleared pine trees. Clad in dusty work boots, Edmond “Biff” Burns, the tank’s developer and landowner, stood mystified at the uproar it had caused.

“We’re not digging a hole and putting a liner in it,” he said. “We’re building a glass-fused metal storage tank. I don’t want it to cause any problems with the environment.”

The site lies about five miles southwest of U.S. Route 50, the four-lane highway popular with ocean-bound tourists. The nearest concentration of homes is at the town of Mardela Springs, a circuitous six-minute drive away.

“We’re in an agricultural district,” Burns added, shaking his head.

Poultry industry insiders contend that the opposition reflects a misunderstanding about poultry residuals.

The slurry is a byproduct of meat processing. At poultry plants, tiny scraps of leftovers — fats, skin, feathers and bits of meat — are collected in wastewater. To separate the solid material from the water, a special unit pumps bubbles of air and chemicals into the mixture. That forces the solids to collect at the surface, where they can be skimmed off.

Because the process is known as “dissolved air flotation,” the sludge-like substance it produces is often called “DAF.” Contracted distributors then truck the slurry to farmers who can use it.

Many crop growers use the slurry to fertilize their fields between plantings. It can’t technically be called a fertilizer, though, because the nutrient content fluctuates from load to load. Instead, it is known as a “soil amendment.”

It is anything but a waste product, said Holly Porter, executive director of the Delmarva Poultry Industry, a trade group for the peninsula’s chicken businesses.

“It’s classified as a soil amendment and is used to help plant growth and put organic materials back in the soil, which promotes soil health,” she said.

Porter casts the storage tank as a necessity in environmentally progressive Maryland.

State law prohibits farms from spreading fertilizer from Dec. 15 to March 1, and that includes residuals. The ground is usually too icy during the winter, making nutrients more prone to run off into surrounding waters. Application is banned for similar reasons during other periods when the ground is saturated, such as after heavy rains.

Chicken production continues, regardless of the weather. So, during times when the residuals can’t be spread, they must be stored somewhere, Porter said. (Continue reading below photo.) 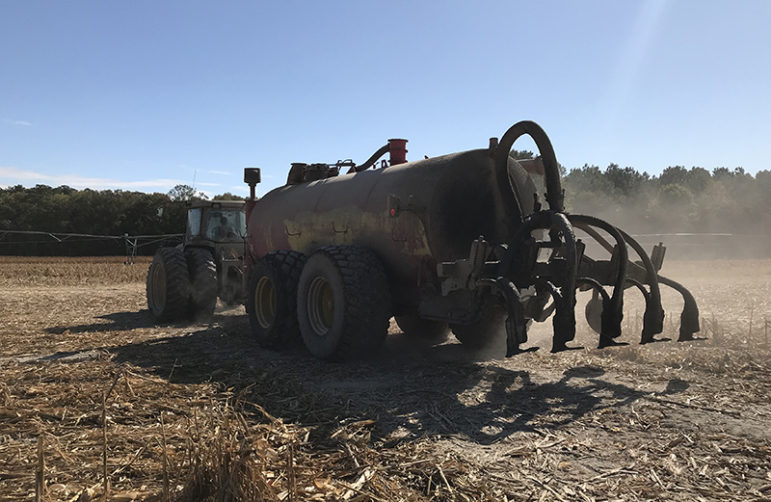 Residuals from poultry processing are spread on a Maryland farm field as a soil amendment. Bay Journal photo by Jeremy Cox

There’s no putting a positive spin on the odor. Residuals reek like a dumpster overflowing with dirty diapers.

“If you’ve ever been around where this stuff is applied, it’s really foul-smelling,” said Bob Van Meter, one of the residents opposing the tank. “It’s far worse than animal waste.”

But those who support their agricultural application counsel that the stink is only temporary. To tamp down the smell, farmers inject the slurry directly into the soil. If it’s sprayed onto the surface, they follow up with a tractor that mixes it into the soil.

In storage tanks, a crust will naturally form on the top, suppressing odors, they say.

Van Meter isn’t convinced. “I believe this stuff to be industrial waste. The definition doesn’t change [to a soil amendment] until it gets applied in the ground,” he said.

The local controversy comes as residuals face a higher level of scrutiny from the Maryland Department of Agriculture. Despite the wide use of residuals as fertilizer, that state has no data on how much is spread or where, said Jason Schellhardt, an MDA spokesman.

That’s set to change. Last spring, state lawmakers passed a law(SB546) that sets more stringent reporting standards and penalties on farmers and the industry that transports fertilizers from poultry sources to farmland.

Previously, those filling out the forms could simply report that they applied a soil amendment without specifying the type. (And there are several types, such as poultry residuals, human sewage sludge and compost.) Now, they will have to say exactly what they were spreading, Schellhardt said.

The goal, he added, is to ensure better compliance with the state’s phosphorus management tool, which regulates how much phosphorus can be applied on farmland based on how much of the nutrient is already in the soil and how likely it is to reach waterways.

Burns, who farms about 2,200 acres on the Shore, has been applying residuals on his land for more than seven years. The slurry comes from an Amick Farms processing plant in Hurlock and a Valley Proteins rendering plant in Linkwood. Both are in Dorchester County, Wicomico’s neighbor to the north.

A Valley Proteins official said the Winchester, Va.-based company has no control over the residuals once the material leaves its property. “We don’t own it anymore. We’re not in the land-application business,” said Robert Vogler, director of environmental affairs.

A spokeswoman for Amick told a Bay Journal reporter she would check with others at the company before responding to questions, but no response came.

As the chicken industry has expanded on the Shore in recent years, some environmental advocates have blasted the region’s agribusiness companies for saddling contract chicken farmers with dealing with the birds’ manure. The residuals issue mirrors that problem, said Kathy Phillips, one of the chicken industry’s fiercest critics.

“It’s part of the poultry industry externalizing its waste management and taking no responsibility for it,” said Phillips, executive director of the Assateague Coastal Trust. “That’s how we’ve gotten into the problem of the fields that can’t meet the standards for the phosphorus management tool.”

Burns said he has and will continue to apply residuals in accordance with his nutrient management plan, the state-approved fertilizing protocol for his cropland.

He has an extra incentive to abide by the rules, he added. His own home lies less than a mile down the road from the tank.

Wicomico wasn’t Burns’ first choice, though. In 2018, he filed permits with Dorchester to construct a tank. It seemed fitting because it would be close to the two chicken facilities, he said.

Although the property he selected was zoned for agriculture, the county’s planners decided the project would have to get approved by the Board of Appeals because of an obscure local code requiring fertilizer-storage buildings to get a public hearing. The process alerted the public to Burns’ plans. In the ensuing uproar, he pulled the application.

A few months later, he refiled with Wicomico. Its planning officials say their hands were tied. Agricultural buildings are automatically allowed in agricultural districts provided that they’re constructed up to code, said Rick Dwyer, a Wicomico building administrator.

“What that gentleman is storing in that tank is not under the authority of Wicomico County,” he said, adding that MDA oversees soil amendments and fertilizers.

Neighbors didn’t hear about the proposal until a few days before it was approved behind closed doors.

The county’s moratorium might not have much practical effect. County officials say there are no other pending requests to build a storage tank for residuals. The last one that was constructed before Burns’ was in 2003.

Van Meter said he hopes the county will work with residents to draw up a map of suitable areas where tanks could be built without encroaching on existing homes. He would also like a public hearing to be mandatory.

“It’s time to look at it to make sure this doesn’t happen again,” Van Meter said.

New solar farm will double solar energy on the grid, but return no cash to Maryland