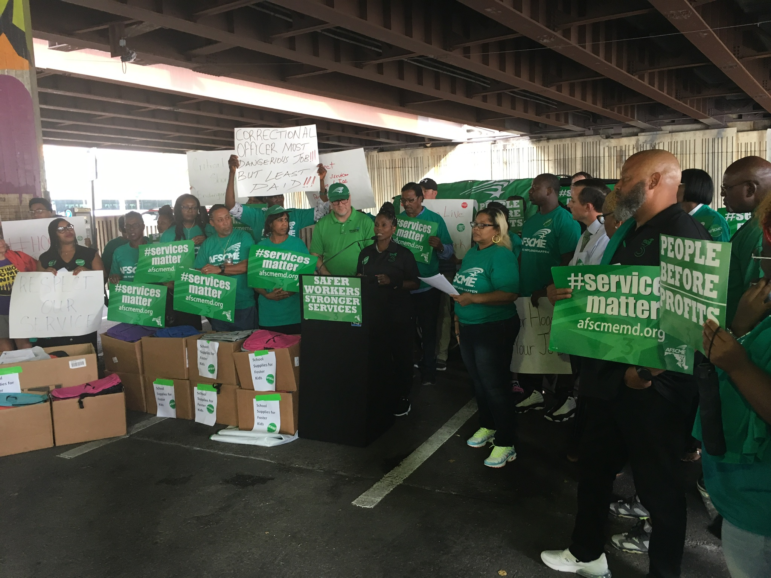 STATE WORKERS RALLY FOR STAFFING: Dozens of Maryland government employees rallied Wednesday in downtown Baltimore, protesting what they say is the Hogan administration’s refusal to fill thousands of vacant positions in state government, Luke Broadwater of the Sun reports. “There’s a crisis in staffing and a crisis in services,” said Patrick Moran, president of the American Federation of State, County and Municipal Employees Maryland Council 3 union.

MO CO TECHNOCRATS MAY HOLD SWAY ON HOGAN ROAD PLAN: An overlapping patchwork of laws, some dating back nearly a century, may give Montgomery County’s top planning officials significant leverage in their negotiations with the state over the proposed widening of the Capital Beltway. If they choose to press their advantage, those planners could significantly impede the Hogan administration’s plans to add additional lanes to Interstate 495, Bruce DePuyt of Maryland Matters reports.

COURT: MDE OK ON STORM-WATER MANDATE: Steve Lash of the Daily Record reports that a sharply divided Maryland high court has ruled that the Maryland Department of the Environment validly imposed stormwater-protection standards on two counties more stringent than the counties’ population sizes would generally call for under the law and legitimately mandated that they reduce polluting discharges beyond “the maximum extent practicable,” as stated by statute.

SPEAKER JONES TAPS GOODEN TO CONTINUE ON UM BOARD: The University System of Maryland could have a familiar face on board for five more years. Speaker of the House Adrienne Jones has appointed Linda Gooden, the Board of Regents’ current chairwoman, to a newly established position on the board. Gooden has served two terms on the board, the limit set for current members. However, the legislative appointments created by a bill passed this year are considered new appointments, according to an attorney general’s conclusion relayed by the speaker’s office.

OPINIONS VARY ON OPPORTUNITY ZONES: Kevin Rector and Christine Condon of the Sun write about the Trump-backed federal “Opportunity Zones” program to spur investment in poor neighborhoods, and whether they will really benefit Baltimore city residents or just push out poor ones with trickle-down economics. Gov. Hogan and state lawmakers believe it is the former.

CUMMINGS CALLS FOR END TO ‘HATEFUL RHETORIC:’ Rep. Elijah E. Cummings did not directly address the president’s Twitter tirade against the Democrat’s home city of Baltimore during the half-hour talk he gave Wednesday at the National Press Club, Jenna Portnoy of the Post is reporting. He didn’t have to. In his first major speech in the nearly two weeks since President Trump called Cummings’s district a “rat and rodent infested mess” where “no human being would want to live,” the congressman called for an end to “hateful rhetoric” that inspires mass shooters like the man accused of killing 22 people in El Paso.

FRANCHOT TOUTS H.S. AUDITORIUM REUSE: Erika Butler of the Aegis writes that the city of Havre de Grace’s plan to turn a surplus high school’s auditorium into a regional theater to promote the arts “has a lot of merit to it,” Maryland Comptroller Peter Franchot said during a tour of the building Wednesday. “This is the least expensive, biggest return of an existing asset you can possibly imagine,” Franchot said. “The large focus is something that will pay for itself down the road.

7 FREDERICK FACILITIES SOLAR-POWERED: With the flip of a power switch, seven little green lights lit up one by one on a map of Frederick County. The map illustrated the facilities that are being powered by a solar array on nearly 14 acres at the county’s landfill. County Executive Jan Gardner and other officials held a ceremonial commissioning Wednesday for the solar array, which is estimated to generate about 2 megawatts of power per day and supply just under 20% of the county’s general building power needs.

RESEARCH IMPERILED WITH U.S. LAB SHUTDOWN: A decision by the Centers for Disease Control and Prevention to shut down a Fort Detrick military lab may affect research underway there, Heather Mongilio of the Frederick News Post reports. At the time of a cease and desist letter from the CDC, the U.S. Army Medical Research Institute of Infectious Diseases was working on a multi-year project to develop antibody-based therapies for four lethal viruses.

ABC AUDIT FINDS NO BIAS: An audit of local nonprofit Associated Black Charities did not find that bias played a role in the selection and awarding of $9.6 million to 84 youth-focused organizations in Baltimore, however it did raise questions about a lack of documentation as to why some of the grantees were chosen over other applicants, Carley Milligan of the Baltimore Business Journal reports. Mayor Jack Young requested a review of the Children and Youth Fund manager this spring after learning ABC had ties to former Mayor Catherine Pugh’s “Healthy Holly” children’s book scandal.