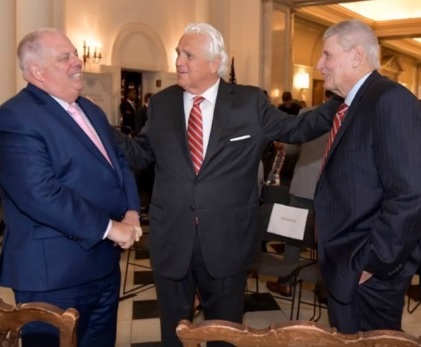 SHORING UP OBAMACARE: Republican Gov. Larry Hogan and leading Maryland Democrats on Wednesday celebrated federal approval of a waiver they say will prevent the state’s Obamacare marketplace from collapse — and save health insurance coverage for about 250,000 state residents, Luke Broadwater of the Sun reports.

POLLS SUPPORT MORE PRE-K: The Kirwan education commission Thursday morning is set to take up the final detailed recommendations for much more pre-kindergarten in Maryland and higher salaries and a new career ladder for teachers — both programs with “significant fiscal impact.” Two new polls out this week seek to bolster the argument that spending more money on these recommendations has broad support and is needed, Len Lazarick reports for MarylandReporter.

SURVEY FINDS 91% OF TEACHERS PAY FOR CLASS SUPPLIES: Kyle Cooper of WTOP-AM reports that an astonishing number of local teachers use their own money to pay for classroom supplies, and many work second jobs to make ends meet. A new survey of teachers sponsored by the Maryland State Education Association finds that 91% of teachers in Maryland use their own money for classroom supplies. In addition, more than 40% have a second job to make ends meet.

PUBLISHERS SUE OVER STATE LAW: Publishers of 10 newspapers and their related websites and the state’s press association are asking a federal judge to strike down a new Maryland law supporters say is meant to limit offshore influence in elections through online advertising, Bryan Sears writes in the Daily Record. “As a matter of constitutional law, there is a stark difference between requiring speakers to disclose who they are and the source of their funding, and imposing that burden on newspapers and other Internet publishers, especially in the circumstances here,” Seth Berlin, an attorney with Ballard Spahr LLP, wrote in the lawsuit.

ETHICS PANEL MEETS OVER CLAIMS AGAINST ANDERSON: Maryland lawmakers spent seven hours behind closed doors Wednesday as a legislative ethics panel met to consider allegations against Del. Curt Anderson, who has been accused by several women of sexual misbehavior, Michael Dresser writes in the Sun.

JEALOUS TALKS ABOUT STUTTER STRUGGLE: Bruce DePuyt of Maryland Matters writes that in his most extensive comments on the subject since launching his bid for governor, former NAACP President Ben Jealous talked openly Wednesday about his lifelong battle with stuttering, calling it “one of the big challenges I had to take on early, just learning how to express myself and my ideas.”

HOGAN COURTS DEM STRONGHOLD: In a Bethesda Beat article about Gov. Larry Hogan courting voters at the Democratic stronghold of Leisure world, Bethany Rodgers writes that Sally MacDonald, a 74-year-old Leisure World resident, says Democratic Party loyalty has been passed down in her family like a genetic trait. So, no one was more surprised than she when she began feeling the urge to vote for Republican Larry Hogan in the 2014 gubernatorial race. It was the first time in her life she’d ever cast a ballot for a GOP candidate, but four years later, she has no regrets. To the contrary, as she informed Hogan this week, she’s planning on doing it again in November.

SCHUH, PITTMAN TO DEBATE: Anne Arundel County Executive Steve Schuh and Democratic opponent Steuart Pittman will go head-to-head in a debate sponsored by The Capital, Chase Cook of Annapolis Capital writes. The debate will take place on Oct. 18 at the Maryland Hall for the Creative Arts, which is partnering with the news organization. Capital Gazette editor Rick Hutzell will moderate the discussion that begins at 7 p.m. Debate topics will include gun violence, education, development and environmental issues.

FLOREEN MAKES THE BALLOT: Nancy Floreen, a longtime Montgomery County Council member who broke from the Democratic Party to run as an independent for county executive, collected enough valid signatures to appear on the ballot this November, ensuring a three-way race for the top position in the left-leaning county. Floreen submitted 20,360 signatures, of which 13,356 were determined valid, Election Director Margaret Jurgensen wrote Wednesday in a letter to the candidate, reports Jennifer Barrios in the Post.

MD LAWMAKERS SEEK COHEN TESTIMONY: Maryland members of a House oversight committee called on the panel’s Republican chairman Wednesday to summon President Donald Trump’s former personal lawyer to testify, saying Michael Cohen’s interactions with Trump “warrant robust and credible oversight” by Congress, writes Jeff Barker for the Sun. “I have no doubt that you would convene immediate hearings on these matters if the occupant of the White House were a Democrat,” Rep. Elijah E. Cummings of Baltimore wrote to Trey Gowdy, chairman of the House Oversight and Government Reform Committee. “I ask you to apply the same standard here.”

PEREZ ON BRINGING DEMS TOGETHER: As the midterm elections approach, Democratic National Committee Chairman Tom Perez, of Takoma Park, is hoping his party can apply the lessons of the 2016 presidential election without endlessly ruminating over the outcome. His job is more complicated than encouraging brooding Democrats to go to the polls. Jeff Barker of the Sun reports that the 56-year-old former Maryland and U.S. labor secretary said he needs to make sure that progressives feel welcome in the party, that African-American voters aren’t taken for granted, and that the memory of 2016 motivates rather than depresses the base.

DELANEY FINDS NO TRACTION IN LEE STATUE REMOVAL: A bill co-sponsored by Congressman John Delaney to remove a statue of Gen. Robert E. Lee from Antietam National Battlefield has stalled in committee. Delaney spokesman Will McDonald said Tuesday that the bill, H.R. 3779, hasn’t made any headway in the Republican-controlled House Committee on Natural Resources, Dan Dearth reports in the Hagerstown Herald-Mail.