BALTIMORE BRACES FOR ICE RAIDS: Maryland’s senators are slamming planned ICE enforcement as reckless and unnecessary, reports Robin Bravender for Maryland Matters. Instead, they said the Trump administration should focus on reducing violence from Central American gangs in the U.S.

IMMIGRANT RIGHTS LAWSUIT: An immigrant rights advocacy group on Thursday filed a federal lawsuit against Frederick County, Frederick County Sheriff’s Office, Sheriff Chuck Jenkins and two of his deputies for a 2018 traffic stop that they say was based on racial profiling and led to the illegal detention of a Latina woman, reports Jeremy Arias for the Frederick News-Post.

REACTION TO CITIZENSHIP NOT ON CENSUS: Maryland lawmakers were relieved when President Donald Trump said Thursday that his administration is backing down from an effort to add a question inquiring about citizenship to the 2020 U.S. census, Christine Condon reports for the Sun.

DEMS ALLEGE HOGAN CAMPAIGN VIOLATIONS: For the second time in a month, the Maryland Democratic Party has filed a complaint with the Maryland Board of Elections accusing contributors to Republican Gov. Larry Hogan of campaign violations, reports Luke Broadwater for the Sun.

EXCESSIVE FORCE: Dozens of agencies — including the Baltimore Police Department — never reported when officers use excessive force or injure someone and cases of officers’ criminal misconduct, reports Kevin Rector for the Sun. State lawmakers passed the law mandating reporting in the wake of Freddie Gray’s death in police custody.

LONG WAIT TO DISCIPLINE MD JUDGES: The murder of a man who had sought a protective court order against his neighbor has drawn attention to the slow-moving disciplinary system used for judges in Maryland, reports Alison Knezevich in the Sun.

PURPLE LINE DELAY: Maryland transportation officials have granted the contractor building the Purple Line a 160-day delay in the light-rail line’s opening but will not compensate it for related costs, reports Katherine Shaver for the Post.

JACK EVANS INVESTIGATION CONTINUES: A federal grand jury investigating D.C. Council member Jack Evans has issued subpoenas for testimony and documents related to a recent separate inquiry in which a Metro committee found that Evans committed ethical misconduct when he was chairman of the transit agency’s board of directors, reports Paul Duggan and Fenit Nirappil for the Post.

UTILITY RATE SETTING CHANGES: Utility companies in Maryland are awaiting an order from the Public Service Commission that could allow them to move forward with overhauling the way rates are set in Maryland, reports Holden Wilen in the Baltimore Business Journal.

MES TO OPERATE GARRETT WASTEWATER PLANTS: Maryland Environmental Services will operate Garrett County’s water and wastewater treatment plants, reports Renee Shreve in The Garrett County Republican. The arrangement with the state-owned environmental organization was approved in a resolution and will lower costs, she reported.

DELUGE TEST IN THE STATE HOUSE: The Maryland Department of General Services plans to conduct a test of the State House “deluge” fire-suppression system this morning starting at 9 a.m., drenching the outside of the historic wooden dome with water, reports the staff of the Capital Gazette.

OVERDOSES DOWN IN ANNE ARUNDEL: The number of opioid overdoses in Anne Arundel County have continued to decrease with a 25% decline in comparison to 2018, reports Naomi Harris for The Capital Gazette. 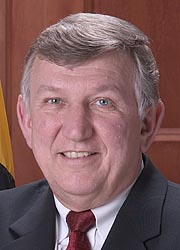 COURT OF APPEALS SWEARING IN: The newest member of Maryland’s top court, Brynja Booth, pledged Thursday to “work hard every day to justify” her seat on the Court of Appeals, reports Steve Lash for The Daily Record.

HOGAN PROMOTES SPEECHWRITER: Gov. Larry Hogan continues to fine-tune his communications shop, announcing Thursday that he has named Kata Hall to serve as deputy communications director, reports Josh Kurtz for Maryland Matters. Hall, whose tenure in the administration began in May 2015, previously served as the governor’s senior speechwriter.

FACEBOOK GROUP OPPOSED ELLICOTT CITY PLAN: A Facebook group served as the digital headquarters of sorts for those opposed to then-Howard County Executive Allan Kittleman’s multimillion-dollar plan to mitigate flooding in Ellicott City, reports Erin Logan of the Howard County Times in the Sun. Kittleman made the plan public last August, 71 days before voters would decide whether the Republican would get a second term in office.

OPINION ON UMD ACCREDITATION: The regents bear most of the blame for the ongoing review of the university’s accreditation, writes the Diamondback Editorial Board in an editorial about the chaos that ensued from Jordan McNair’s death. But university administrators cannot entirely absolve themselves; their missteps were instrumental in setting up the board’s decisions that led to concerns about the school’s autonomy, they state.

GUN POLICY TRAINING: About 50 teenagers from across the country filed into a Johns Hopkins University lecture hall Tuesday to begin an intensive, four-day summer course on gun policy and research taught by experts to develop advocates on the issue, reports Talia Richman in the Post.