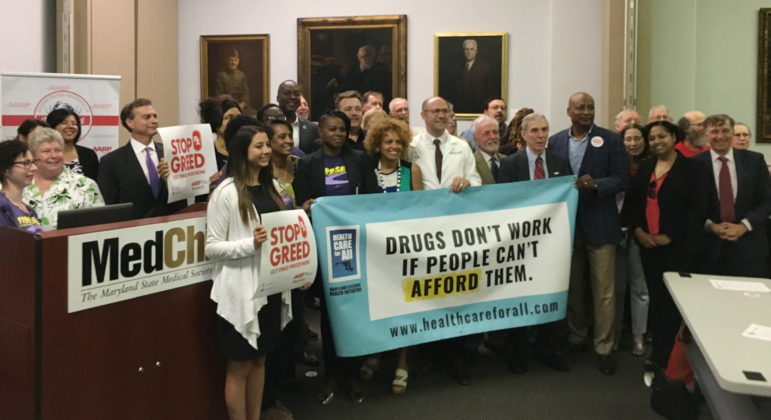 Legislators, county executives and advocates for the new Prescription Drug Affordability Board gathered Monday at the Maryland State Medical Society to celebrate enactment of the new board they hope will help hold down the price of medications. For the moment, the law only covers those with health insurance sponsored by state and local government. MarylandReporter.com photo

HOGAN STILL MUM ON FUND RELEASE: As a new fiscal year began, Gov. Larry Hogan had yet to announce whether he will release millions of dollars for programs the legislature added to the state budget — leaving school construction projects, the testing of rape kits and summer jobs for Baltimore youth in doubt, reports Luke Broadwater for the Sun. Del. Maggie McIntosh, chairwoman of the House Appropriations Committee, said the lack of a decision by Monday impacts real people and projects that face an uncertain future.

HOGAN TO HOLD BACK ON $55M FOR WMATA: Gov. Larry Hogan said Monday the state would withhold about $55 million from the Washington Metropolitan Area Transit Authority, alleging the leaders of the system have refused “to cooperate with our attempt to conduct proper financial audits.” WMATA officials were not immediately available for comment, Luke Broadwater of the Sun is reporting.

JUDGE PUT ON 6-MONTH SUSPENSION: The Maryland Court of Appeals has imposed a six-month suspension without pay on a Baltimore judge who repeatedly clashed with her colleagues, finding that her conduct “exhibited a pattern of discourtesy and uncontrollable incivility that had pervasive effects on the administration of justice” in the district court, Alison Knezevich reports for the Sun.

$27B NEEDED TO FIGHT SEA RISE IN MD: Maryland will need $27 billion to fortify coastal communities from sea level rise in the next 20 years, Josh Kurtz of Maryland Matters reports. That’s the startling assessment of a study released late last month that calculates how much the U.S. will need to spend on sea wall construction and enhancement between now and 2040 to protect communities from climate change – using conservative estimates on sea level rise.

McNAIR DEATH HIGHLIGHTED UM GOVERNANCE PROBLEMS: Talia Richman of the Sun writes that the death of University of Maryland football player Jordan McNair generated a “crisis” that revealed the Board of Regents and the university’s administration “do not have a clearly articulated and transparent governance structure,” according to the Middle States Commission on Higher Education. The university remains accredited while on warning, but must host a commission liaison in the fall to discuss the commission’s expectations. The university must submit a monitoring report by March 1, 2020, after which another team of experts will visit the university.

NEW PRESCRIPTION DRUG PANEL: Maryland lawmakers, elected officials and advocates praised the novelty of a new law to create a board to review the prices of high-cost prescription drugs, even as the earliest possible action it could take on prices is 2021, Tim Curtis of the Daily Record reports. The law to create a Prescription Drug Affordability Board took effect Monday, and lawmakers hope this attempt to do something about the rising price of prescription drugs sticks.

COURT RULES FOR TELECOMMUTERS’ WORKERS’ COMP: In a landmark ruling for telecommuters, Maryland’s second-highest court has held that employees injured while leaving their “home office” for a work-related site may qualify for workers’ compensation if working from home is necessary for their employment and is not just personally convenient, Steve Lash reports in the Daily Record.

STATE DESIGNATES 2 ARTS DISTRICTS: Maryland has designated a pair of new zones providing tax incentives aimed at bolstering artistic endeavors, Adam Bednar of the Daily Record reports. Secretary of Commerce Kelly M. Schulz said on Monday that the Department of Commerce selected the town of Easton and the Pennsylvania Avenue corridor in west Baltimore as Arts and Entertainment Districts. The classification lasts for a decade. Maryland’s 26 existing districts supported 9,987 jobs that paid more than $320 million in wages in the last fiscal year, according to the state.

EL SALVADOR, MD PROSECUTORS MEET ON MS-13: A popular meet-up spot in Prince George’s County for MS-13 members was the first stop on a tour Monday for prosecutors from El Salvador visiting their counterparts in the United States, part of a two-day meeting between prosecutors from the Central American country and those with the U.S. attorney’s office in Maryland as the groups combine investigative powers to fight the violent transnational gang on both fronts, Lynh Bui of the Post reports.

ELRICH FOR STATE-RUN POT INDUSTRY: Bruce DePuyt of Maryland Matters writes that as Maryland lawmakers begin to unearth issues involved in legalizing marijuana for recreational use, Montgomery County Executive Marc Elrich has an idea that is certain to shake up the debate – even if it’s never implemented: Cannabis stores owned and operated by the state. “They should not just legalize it. They should let Maryland farmers grow, and the state should process and sell. And take every dime of revenues,” he said.

OPINION: HIGH COURT FOR DISTORTED DISTRICTS: In the end, writes Barry Rascovar in a column for Political Maryland, conservatives on the nation’s highest court sided with … “the art of grossly distorting political districts … Let political greed and an insatiable quest for power dominate America. So be it. Federal courts will sit on the sidelines. … It slammed the door on creating guidelines for fair, reasonable House districts. Those in the majority are free to ensure their power forever. Those in the minority get the shaft.”

BA CO COUNCIL WITHDRAWS BASU CONTRACT: The Baltimore County Council has withdrawn a proposed contract with an economic consulting firm after criticism that its chief executive had conflicts of interest, Alison Knezevich reports in the Sun. The council was scheduled to vote Monday on the four-year, $25,600 agreement with Sage Policy Group – whose CEO is Anirban Basu — to provide economic forecasting and briefings to the council’s Spending Affordability and Economic Advisory committees. 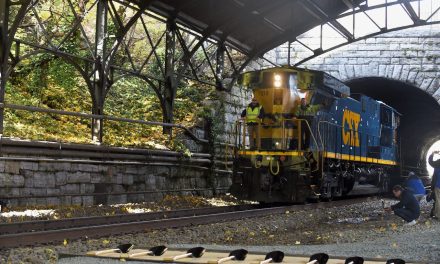