LAPSED TAX CREDIT: When Avendui Lacovara, a Baltimore real estate agent, heard the General Assembly did not renew a property tax credit for newly constructed homes in the city in this past session, she called her city councilman and developers to see what could be done. To the dismay of Lacovara and many in the city’s development community, the 23-year-old program will expire on June 30 for the upcoming fiscal year after members of the legislature discovered too late in the session that the program needed to be renewed, Juliana Kim of the Sun reports.

OPINION: ZIRKIN A BAD POLITICAL ACTOR: In an op-ed in the Capital Gazette, Andrea Chamblee, John McNamara’s widow who has been an advocate for gun control in the year since her husband’s murder, calls out state Sen. Bobby Zirkin, writing that he “represents everything bad about politics. He used scheduling tricks to prevent votes on the Death with Dignity Act in 2016, the Trust Act in 2017, and last session’s bill that would have required background checks for every gun sale.”

CREDIT FOR EVANS’ RESIGNATION: Gov. Larry Hogan’s persistent criticism of Jack Evans, board chair of the Washington, D.C., area’s transit agency, finally paid off, writes Bruce DePuyt for Maryland Matters. Evans, a member of the D.C. City Council, announced on Thursday he will step down from the Washington Metropolitan Area Transit Agency board, effective next week. Hogan has raised questions about Evans’ leadership for most of his tenure in office.

COUNTIES ACCOMMODATE FARM BREWERIES: Across much of Maryland, the growing popularity of small, very local, typically farm-based breweries has prompted county officials to consider loosening, or at least altering, their zoning regulations to accommodate these businesses, Pete Pichaske reports for the Daily Record.

OPINION: HOGAN DOESN’T HATE B’MORE: In a column for Maryland Policy, Marta Hummel Mossburg and Carol Park write that, the answer to Barry Rascovar’s June 17 column, “Does Hogan Hate Baltimore?” is a resounding “no.” The question is laughable on the merits as it seeks to blame the Republican governor for a myriad of ills created by decades of mismanagement by the city’s leadership.

FEAR IN IMMIGRANT COMMUNITIES OVER ICE RAIDS: President Trump’s decision to postpone the mass arrests of immigrant families with deportation orders offered a two-week reprieve to shaken cities and towns Sunday, but faith and immigration leaders said they will continue to mobilize for roundups in case talks between the White House and congressional Democrats break down, Washington Post staff is reporting in this nationwide story.

BSO STANDOFF CONTINUES: It appears the labor battle between the Baltimore Symphony Orchestra and its musicians is no closer to reaching a resolution, Brandon Weigel of Baltimore Fishbowl reports. Baltimore Symphony Musicians, a group representing the orchestra’s players, blasted management Friday afternoon for keeping its “draconian” demands to cut the concert schedule by 20% during a federally mediated bargaining session today.

NEW EXEC DIRECTOR OF MD GOP: Corine Frank, the vice chairwoman of the Anne Arundel County Republican Central Committee, has been appointed the new executive director of the Maryland GOP, starting next month, Doug Donovan for the Sun reports. Frank — a candidate for the county school board, a PTA leader and a married mother of two — is to take the job at the Maryland Republican Party after executive director Patrick O’Keefe departs in mid-July for a position at an online fundraising company.

CONGRESSMEN SEEK TO BLOCK CYBERATTACKS: It’s been almost seven weeks since a cyberattack crippled Baltimore City’s computer system. Now, as the FBI continues its investigation and the city struggles to put it all back together, members of Maryland’s congressional delegation are looking at ways to prevent future attacks from creating the same damage, Vaughn Golden reports for WYPR-FM.

LAWMAKERS ON TRUMP’s IRAN PULL-BACK: Jeff Barker of the Sun compiles reaction from Maryland lawmakers to President Trump’s decision Friday that U.S. forces would not carry out a planned retaliation against Iran for what the American military says was that country’s shooting down a drone.

DINING DIN & THE HEARING DISABLED: In an article for the Post, Joyce Cohen writes that under Title III of the Americans With Disabilities Act, restaurants — as places of public accommodation — must accommodate disabilities. But what if the disability is a hearing impairment, and the request is for a lower volume? On this issue, the law has largely remained silent.

SUPREMES PONDER GERRYMANDERING: The Supreme Court enters its final week of decisions with two politically charged issues unresolved, whether to allow a citizenship question on the 2020 census and rein in political line-drawing for partisan gain, which stems from cases in Maryland and North Carolina, Mark Sherman reports for the AP. In those cases, lower courts found that Republicans in North Carolina and Democrats in Maryland went too far in drawing congressional districts to benefit their party at the expense of the other party’s voters.

FRANCHOT’s FATHER DIES: Douglas W. Franchot Jr., a retired lawyer and father of Maryland Comptroller Peter W. Franchot, died Thursday morning of cardiovascular failure at his Riderwood Village retirement community home in Silver Spring, Fred Rasmussen writes in the Sun. “I just wanted to let everyone know that my father, Douglas Franchot, died peacefully this morning at the age of 97,” the comptroller wrote on Facebook. “I’m grateful and relieved that he was alert, in good spirits, and free of pain in the days leading up to his death.” 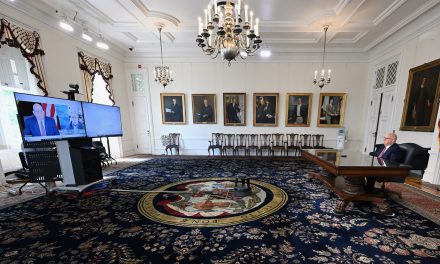