When Linda Smith gets bookings for her Baltimore City bed and breakfast through Airbnb, she tells guests they’ll have to pay 15.5% in taxes upon arrival.

It leads some people to cancel their reservation.

Smith, owner and innkeeper of Rachael’s Dowry, is just following the rules for registered hotels operating in the city, but Airbnb properties fall under different taxes and regulations.

Some lawmakers are trying to change that, at least when it comes to paying Maryland sales tax.

A bill before the Senate Budget and Taxation Committee would require short-term rental sites to collect the 6% Maryland sales and use tax at the time of booking and remit the fees to the state.

SB533, sponsored by Sen. Guy Guzzone, D-Howard and Sen. Cory McCray, D-Baltimore City, was part of a crowded agenda of 24 bills that were heard on Wednesday.

Smith testified for the sales tax bill to help level the playing field within her industry, she said.

“We have a 6% price disadvantage until this bill is passed,” she told committee members.

Justin Fiore, government relations manager with the Maryland Municipal League, which represents the state’s 157 cities and towns, said his organization estimates $1.4 million in sales tax is lost in Anne Arundel County alone from these online platforms. About 25% of all accommodations in Annapolis are in short-term rental properties, he said.

“We think it’s essentially a parity measure,” he said in supporting the bill.

According to an article last month in the Baltimore Business Journal, Baltimore City had the most Airbnb guests in Maryland in 2018, at 107,700 individuals, earning hosts $14.9 million.

Across the state, 383,000 guests used the online home sharing service last year, earning hosts $57 million. Airbnb estimates there are over 6,500 hosts in Maryland who earn an average of about $5,600 annually, the article states.

Besides collecting state sales tax, Smith also must collect a 9.5% city hotel tax. The Baltimore City Council imposed the same hotel tax on guests of short-term rental sites operating in the city when they passed new regulations in December.

For her 6-room inn near Camden Yards, Smith is also required to have liability insurance, fire monitoring and sprinkling, annual health and safety inspections, and be commercially zoned. Airbnb properties don’t have the same requirements, she said.

While she bristles at the disparities, she also advertises her B&B on Airbnb’s website.

“For marketing purposes, I’d be foolish not to,” she said in an interview following the bill hearing. “People are using these platforms now to find things. They’re the online yellow pages. You kind of have to be there to be seen.”

According to the bill analysis, Airbnb reported $2.6 billion in revenue in 2017. The company has made agreements with several states and local governments to collect and remit sales and hotel rental taxes. In Maryland, the platform collects hotel rental tax for properties in Montgomery County.

Besides Airbnb, other online lodging platforms that would be covered by the bill include: VRBO, Booking.com, HomeAway, Flipkey, Homestay, Go With Oh, One Fine Stay, House Sitting, VillasDirect, and Outdoorsy.

State sales and use tax revenues stand to increase “by a potentially significant amount beginning in fiscal 2020” if the bill passes, according to the fiscal and policy note, although no specific dollar figure is given. Sales taxes collected from hotel and motel room rentals and apartment and cottage rentals in the state totaled $125 million in fiscal 2018, it said.

Some online hosting platforms are currently collecting and paying state sales tax, but due to confidentiality requirements, the names of those companies and the amounts of taxes collected can’t be disclosed, according to the Comptroller’s Office.

Several people spoke in support of the bill, including representatives from the Maryland Association of Counties, the Maryland Municipal League, Marriott and even Airbnb.

Steve Shur, president of Travel Tech, which advocates for the travel technology industry, was the lone speaker against the bill.

Besides collecting the sales tax, the bill requires short-term rental sites to list sales tax and fees separately from the rental rate. 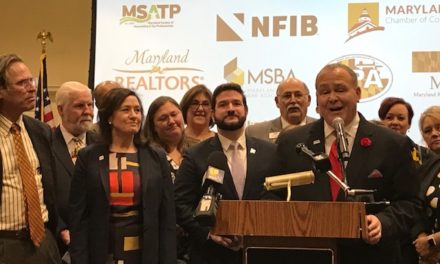