By a show of hands, the South River High School girls lacrosse team was all for raising the state minimum wage to $15 an hour. After all, several are working their first, minimum-wage job, and what teenager couldn’t use more money?

But when they heard the other side of the argument – that the bill, HB166, could be a “jobs killer” for young workers like them – the hands went down, and the questions began. (Workers under 18 would be paid 85% of the minimum, as they are now.)

“That could make unemployment rise, right?” asked Kelsey Winters, 17, of Harwood, a senior and attacker on the team.

The lady Seahawks from Anne Arundel County had a come-from-behind win against Dulaney to clinch the state 4A championship last year. They were invited to the State House to be recognized for their victory on the Senate floor.

While they waited, delegates funneled into the House Chamber where their own competition in the “fight for 15” minimum wage debate was about to begin.

The delegate’s comments, as well as their votes, broke along party lines.

“I’m supporting it,” said Del. Joseline Pena-Melnyk, D-Prince George’s and Anne Arundel, as she dashed inside the chamber, coffee in hand.

“I’ve heard from a lot of constituents, a lot of perspectives. I think the most important thing this legislature can do right now is listen. But I think everyone deserves a living wage. I hope it’s a strong step in that direction.”

In the end, the House voted down several amendments proposed by Republicans to alter the bill.

No exemptions for rural, border areas

Opponents representing the Eastern Shore and Western Maryland decried the bill’s impact on  rural areas, especially where businesses compete with neighboring jurisdictions that have lower minimum wages, such as Delaware ($8.75), Pennsylvania ($7.25) and West Virginia ($8.75).

“You can walk from Cumberland to West Virginia. We see West Virginia from our offices, from our businesses. Their minimum wage will be half ours,” said Del. Jason Buckel, R-Allegany.

One of the proposed amendments would have set a separate minimum wage for rural areas. It failed 44 to 97. Another would have allowed counties to set their own independent minimum wage. It failed by a similar vote.

Chair of the Economic Matters Committee Dereck Davis, D-Prince George’s, said the goal was “clear and consistent” regulation across the state for the base wage, although counties are free to set their own higher minimum wage.

Another amendment would have increased the age for a training wage from 18 to 20. It also failed by a vote of 45 to 95. 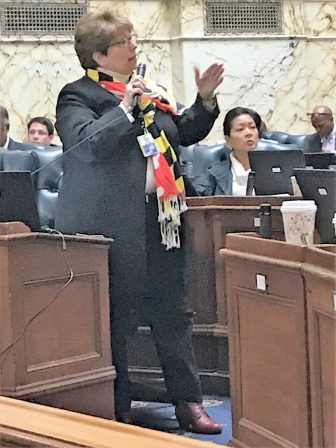 House Majority Leader Del. Kathleen Dumais, D-Montgomery, said the committee “did struggle and we tried to find a good balance.”

The bill, HB166, is sponsored by 77 delegates, with Del. Diana Fennell, D-Prince George’s, as lead sponsor. It’s cross-filed with SB0280.

The bill increases the minimum wage in phases:

Amendments proposed by the Economic Matters Committee were adopted. One would enable the Board of Public Works to temporarily suspend the increase in the minimum wage. Another would mandate pay increases for certain categories of health care workers be included in the governor’s budget in lieu of the minimum wage.

The bill now goes to a final third-reader vote in the House before it is sent to the Senate.