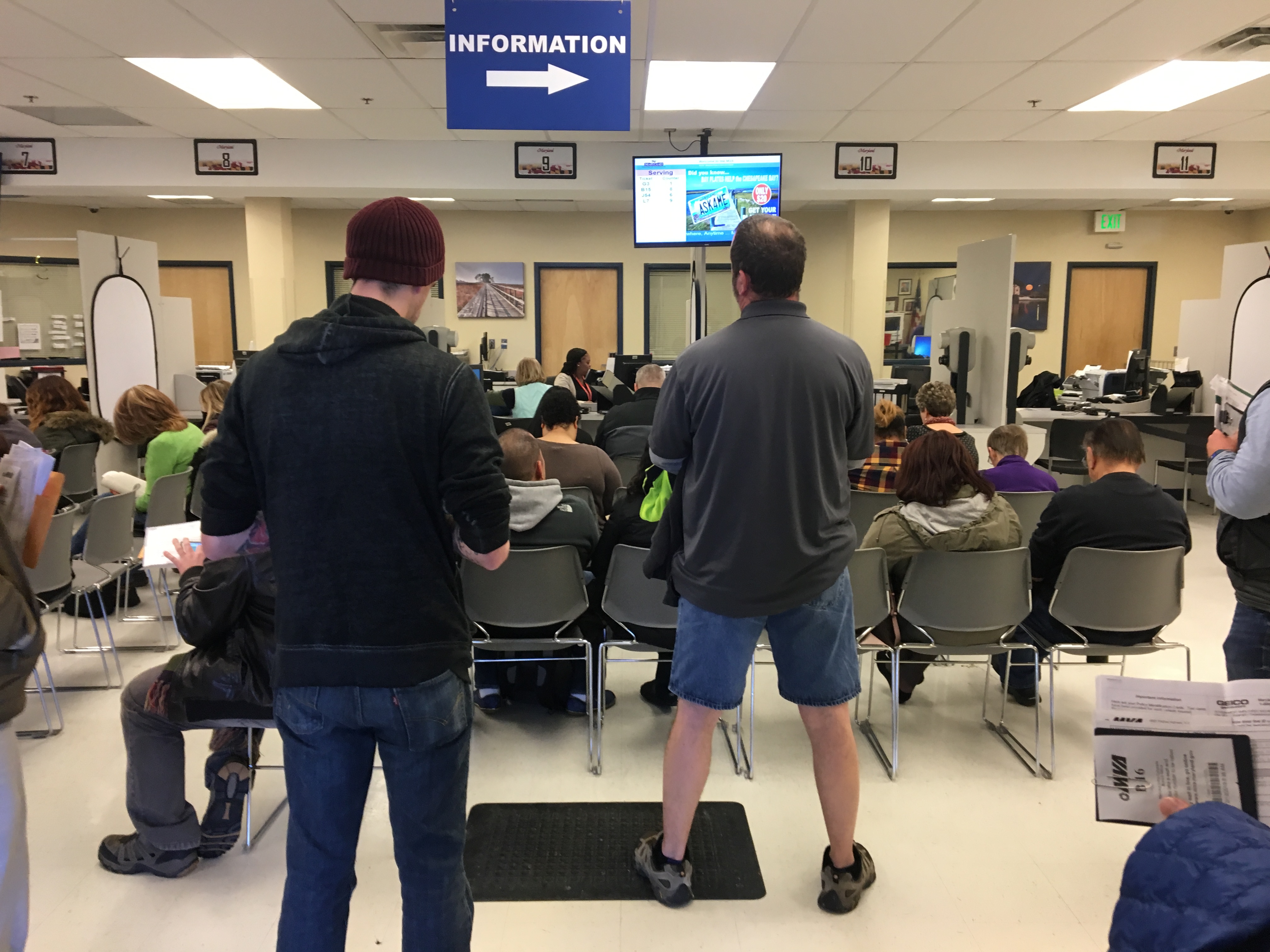 It was standing room only at the MVA's Columbia office at 9:30 a.m. Feb. 13. MarylandReporter.com photo

The new driver’s license requirements demanded by federal law are not only producing long lines at Maryland Motor Vehicle Administration offices, but anger and frustration for many who are having their documents rejected to get a compliant REAL ID.

The process seems to be worse for older citizens who are having their original birth certificates rejected, and for women of any age who have had their last names changed by marriage or divorce.

On the other hand, getting a compliant license is brief and smooth sailing for people like myself who come with the right documents — a minimum of four papers, and five or six for others — and make an online appointment with the MVA.

But even people with valid, current U.S. passports — a fully compliant federal ID acceptable for air travel — are having their passports rejected for lack of a full middle name as shown on their driver’s license.

After October 2020, people without a compliant REAL ID from a state or a federal ID like a passport will not be able to get through airport security to get on a commercial aircraft.

Here are the MVA REAL ID requirements. Even if you have a driver’s license with the small star in the upper right corner, you need to submit the same documentation to the MVA.

Here are some of the stories we got in reaction to our Feb. 8 story “Maryland drivers facing longer lines, frustration on license renewal to comply with federal law.”

On MarylandReporter.com’s Facebook posting, John Hartnett wrote “I waited almost 3 hours at a supposed ‘Express’ office before I left. Word to the wise: Make an appointment! … Try finding your birth certificate from another State after 71 years! Imagine the hoops one has to go thru if they are a LEGAL immigrant.”

MVA “appointments” are assigned times to show up at an office.

Then again, Vince Nappi reported, “It took no longer than in years past, a little overboard on the documents but the mail clearly said what to bring.”

Said Stephen Haller online, “I just renewed late last month. I had scheduled online for an appointment. I was called within 5 minutes of the requested time and was out the door within 20 minutes. Scheduling the appt online is the way to go.”

This was my experience last Wednesday at the crowded MVA office in Columbia as well. With a special line for appointments, I and the woman ahead of me were out the door in 20 minutes.

Others at other offices were not so lucky, Michael Golden, director of external affairs at the state pension system, said, “I waited three hours at the MVA yesterday to get my renewal.”

Longtime TV reporter Scott Broom on Twitter said, “Huge 4hr wait at MVA Glen Burnie today. 60% of Marylanders will need to go through this to comply with Real ID Act. You’ll need all kinds of documents and A LOT of patience to renew your license.”

Ruth Feeser Taylor said on Facebook, “The new requirements are ridiculous. You should be able to use your passport to get a driver’s license. What the hell is wrong with the bureaucrats at the Maryland Department of Motor Vehicles!”

Beside proof of age and identity, the additional requirements for proof of a Social Security number and two proofs of residence are actually in the federal law initially passed in 2005, and implemented over the years by regulations from the U.S. Department of Homeland Security.

The most common cause for problems with REAL IDs renewal seems to be MVA’s rejection of original birth certificates from older residents, including those issued by hospitals.

In a letter to the Calvert Recorder and Del. Mark Fisher, Patricia Dennis of Chesapeake Beach wrote about her experience in the Prince Frederick office.

“The lady behind the desk stated that the MVA wouldn’t accept my birth certificate because they don’t accept the old ones issued by the state of Maryland. Mine was issued in 1955. She instructed me to go the health department and have them print off another copy of the birth certificate and bring it back. I did that– it cost me $20 to get a copy of a document that I already had.”

And Dennis pointed out, she had used the original birth certificate for many purposes, including her first driver’s license.

“I sat in there for hours and watched elderly person after elderly person be turned away from renewing their licenses for the very same reason: The MVA wouldn’t accept their original birth certificates. I saw this as a form of discrimination. We seniors have no control over the type of birth certificate that was issued, legally, by the state of Maryland, or anywhere else, when we were born. How much money is the state sucking away from its senior citizens by forcing them to pay $20 apiece to get a copy of a document they already have?”

Here is information about getting a Maryland birth certificate.

More curious is MVA’s rejection of valid, current U.S. passports — proof of age, identity and citizenship all over the world. On Feb. 7, Timothy Westmoreland of Takoma Park wrote to MVA Administrator Christine Nizer about his three-hour wait at the White Oak office.

“The MVA staff person looked briefly at my passport, showed it to his supervisor, and then told me it was inadequate for MVA. My passport has my first name, middle initial, and last name,” Westmoreland said. He did not mention that the passport has his picture as well.

“I was told that MVA now requires documents to show first name, full middle name, and last name. The staff person said this is a new requirement of the State of Maryland, effective in December of last year. He also said that I was the third person today he had turned away because of this issue. (He was one of about 20 clerks, so I assume there were quite a few more and, of course, White Oak is only one of several offices). When I asked to speak to his supervisor, she simply told me that it was a requirement and that I should get a birth certificate with my middle name.”

Westmoreland cited an article in the Albuquerque Journal from 2017 about how the state of New Mexico had changed its policies about middle names for REAL ID.

Then there is problem with married names.

“I needed to renew my ID in 2017. But they wouldn’t keep it in my married name because I never changed my social security info. So…maiden name. Then off to Reisterstown for my birth certificate because the thing MD issues is no longer valid. Then to Social Security to take care of that. Then back to Motor Vehicles with ALL of those documents PLUS all the other ones they wanted (proof of address etc). Pay for another ID & get it issued in my married name. My ID card looks EXACTLY like the one in the picture above. It’s good until 2025. When you run my # through MVA’s Real ID checker…oh you need to come in with documents. Are you *#)#%#()* kidding me?!?!?”

(My information that I have submitted the documents also has not been updated on the MVA website after three days.)

Commentary: Most minds now made up on presidential race; 13 keys to White House predicts winner