In the college application process, one little box is worth thousands of dollars: the one linked to in-state tuition.

Checking that box for the University of Maryland College Park, for example, saves you $24,600 — the difference between paying in-state tuition of $8,651 for the current academic year versus $33,272 for out-of-state students.

Some students, however, may be getting an in-state tuition break who shouldn’t be. With 176,000 students registered within the University System of Maryland’s (USM) 12 institutions and two regional centers, errors can quickly add up to a substantial loss of revenue. About 20% of the students at Maryland state universities — about 35,000 — come from out-of-state, according to the Department of Legislative Services.

Two state audits released in January revealed that proper controls were not being followed at two state universities to ensure that students who claimed in-state residency actually met the requirements. These were the same problems auditors found in recent years at the state’s largest universities.

The Office of Legislative Audits’ two most recent university reports uncovered a lack of oversight at the University of Maryland Eastern Shore (UMES) and at Morgan State University (MSU).

For instance, one test by auditors of nine first-time residency determinations and 11 residency changes found UMES improperly gave in-state rates to four students over several semesters. In that small sample alone, applying the incorrect rates resulted in about $78,000 in lost tuition revenue, the audit found.

Audits over the past three years shows that similar problems related to student residency were uncovered at:

According to state auditors, the proposed in-state tuition for the 2019-2020 academic year averages $9,700 among the state’s public four-year institutions. The difference between in-state and out-of-state tuition ranges from $4,800 to more than $26,000, or almost $13,800 on average. 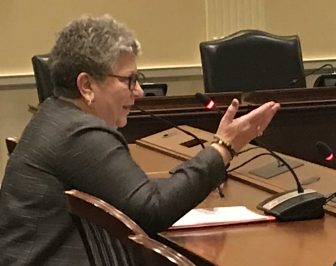 Kim Schatzel, president of Towson University, which has an enrollment of more than 22,500 students, said maintaining accurate records of student residency is a continuous process. “There’s a lot of nuances to it,” Schatzel said.

“We’re very rigorous and transparent about how it’s managed,” she said. “Every university wants to make sure they do it the right way.”

“It’s a matter of making sure we do it right and fairly,” Caret said.

Yet, auditors and universities may disagree ultimately about how much oversight is needed on residency determinations.

Given that numerous state universities have been cited for the same residency issues, MSU spokesman Larry Jones called for collective action.

“It may warrant a larger discussion regarding the possible gap in the expectations of the auditors and university administrators regarding acceptable risk mitigation strategies,” Jones stated in an email. “This appears to be more of an issue at large for higher education in the state of Maryland, and something that should be addressed collectively.”

Non-residents in certain circumstances — such as active-duty military, university employees or undocumented immigrants who attended Maryland high schools and then community colleges — can temporarily qualify for in-state tuition.

A bill before the Maryland General Assembly this session would lessen some of the requirements for a student to be granted in-state tuition. HB318, sponsored by Del. Charles Sydnor, D-Baltimore County, and heard before the House Appropriations Committee Tuesday, repeals the one-year residency requirement and grants in-state tuition if a student has received a Maryland high school diploma, lives in Maryland and has a Social Security number.

His proposal would still allow undocumented immigrants to qualify for in-state tuition under certain conditions through the “Dream Act,” which became law in 2012.

The University of Maryland Eastern Shore has already made changes to address concerns raised in the audit, including hiring four new senior administrators.

Within the fiscal compliance audit for the University of Maryland Eastern Shore, auditors looked at the systems in place at UMES from 2013 to 2017 and found it lacked controls needed to determine student residency.

According to the report, UMES did not perform an independent supervisory review of initial residency status made and recorded by the admissions department, graduate studies department or the pharmacy school from student applications.

The report adds that UMES stopped performing independent supervisory reviews of changes to a student’s residency status in April 2016 when the employee who performed these reviews retired. The audit recommended that residency status and changes are reviewed by independent supervisors and documented, and called for a change in status to the four students within the test group that had been inaccurately classified as in-state students.

“The University concurs with the recommendations and has put in place controls and procedures to ensure the appropriate residency designation is established for all students,” said UMES President Heidi M. Anderson in a statement.

Anderson started at the campus in Princess Anne on Sept. 1, 2018, replacing Juliette Bell who stepped down as president on June 30. The audit period fell under Bell’s administration.

UMES spokesperson William Robinson said Anderson has hired four new senior administrators to fill vacancies or positions that had been staffed on an interim basis.

Anderson’s Chief of Staff Robert Mock Jr. said the university has a campus-wide committee that reviews petitions for residency changes. Re-establishing that committee was among the university system’s responses to the audit findings submitted.

“The residency status for three of the students noted in the audit has been corrected to reflect out of state of billing. One account could not be adjusted since the student left UMES after Spring 2016 and before the conclusion of the audit,” according to the audit response.

The audit, which covered July 1, 2013 to January 3, 2017, found that “documented supervisory reviews of student residency determinations were either not performed or not adequately performed in certain instances.” It recommended that the university perform and document independent reviews of initial residency determination for undergraduate and graduate students, at least on a test basis.

The university’s response, signed by Morgan President David Wilson states: “The University will comply and implement the recommendations by fiscal year-end. Please note that it is not the industry norm to test initial residency status determinations, but rather only changes. We will expand the independent contractor’s review in any event.”

MSU has a current operating budget of $261 million, of which $100 million is appropriated by the state, according to spokesman Larry Jones.

At universities across the state, reactions to the audit are sparking conversations about how many students are wrongly classified and what can be done better.

Brian Leak, coordinator of residency reclassification services at the University of Maryland College Park, said in his experience, mistakes in student residency rarely happen without getting flagged, and if students owe more in tuition, they are billed.

“There are several processes in place to determine if a student is justifiably classified in-state,” he said. “All information is cross-checked in the system.”

Tracey Jamison, director of articulation and enrollment services for the University System of Maryland, said tracking the number of students who get charged in-state rates in error is “not a data point that we collect.” In her view, however, it doesn’t happen often, she said.

When discrepancies reach her desk, “We backtrack it to the institution and make sure they’ve followed the policy.”