Steve Strano, left, a biologist with the U.S. Department of Agriculture’s Natural Resources Conservation Service, and Brian Jennings, a U.S. Fish and Wildlife Service biologist, walk along a breach completed in 2016 on the Pocomoke River. The depression allows the river’s water to spill over its banks more frequently into its floodplain. Bay Journal photo by Dave Harp

As far as local farmers were concerned during the early 1900s, the sluggish and meandering Pocomoke River was a threat to their way of life.

“The flat farmland in this area must be drained by ditches which empty into the Pocomoke River,” a newspaper announcement proclaimed at the time. “After hard rains the water backed up into the drainage ditches, and fields were sodden for days, making the ground barren and unprofitable as farmland.”

In 1939, 200 workers with the Civilian Conservation Corps began converting the upper end of the river on Maryland’s Eastern Shore from sinuous to straight. By the time the work was done eight years later, the waterway’s 18-mile course toward the Chesapeake Bay had been shortened by 4 miles, and a makeshift levee frowned down from both sides of its banks.

But success for the 1940s farmers triggered problems for the Pocomoke’s ecosystem. Now, an effort that has been decades in the making is trying to undo the damage.

Backhoes and bulldozers are carving more than 100 breaches in the levees along a 9-mile stretch of the river just south of Route 50 near the Wicomico-Worcester county line. Then, they’re rolling into the surrounding floodplain, plugging scores of ditches that were dug to ferry stormwater away as quickly as possible.

A coalition of state and federal agencies has been collaborating with The Nature Conservancy on the Pocomoke River restoration since 2015. Work is expected to be completed by the end of the year on the current phase of the project, which extends from Porters Crossing Road north to U.S. Route 50. In the coming years, the group plans to restore the segment stretching from that point north to the Delaware state line.

The nearly $4 million project, funded by government and nonprofit sources, is designed to slow the water down, officials said. The breaches will allow the river to spill more often onto 4,000 acres of its historic floodplain, diverting tons of nutrients and sediment that would otherwise gush downstream and enter the Chesapeake Bay.

“It’s a key location where we can make significant water quality improvements,” said Amy Jacobs, agricultural program director for The Nature Conservancy in Maryland and Washington, D.C. “Anything we do in the Pocomoke, we’re going to see a pretty important impact in the Chesapeake Bay.”

The Chesapeake has been overloaded with sediment and nutrients for decades, leading to a federally driven cleanup campaign with a 2025 deadline. The nutrients spawn algae blooms that create oxygen-starved “dead zones” that are nearly devoid of life. And, excess sediment turns the water cloudy, blocking the sunlight to underwater grasses, which are important habitat for young fish and blue crabs.

The Pocomoke River rises in southern Delaware from the Great Cypress Swamp, home to some of the northernmost stands of bald cypress trees in the country. From there, its black-tinged waters travel about 70 miles to the south, then southwest, emptying into the Chesapeake near the Maryland-Virginia border.

A third of the watershed is farmed

About one-third of the river’s watershed consists of agricultural fields. Scientists determined that nutrients from that cropland were at least partially to blame for an outbreak of Pfiesteria piscicida on the lower part of the river in the late 1990s, when the microscopic organisms was blamed for killing countless fish and devastating the local seafood industry.

The outbreak prompted a raft of state legislation aimed at curbing nutrient pollution on farms and in cities. Little was done afterward to improve the Pocomoke River itself until the conservancy and its partners stepped in to restore the floodplain.

As for the impact to drainage — the raison d’être of the Pocomoke’s channelization — properties abutting the project area should see no difference once the work is done, said Steve Strano, a Maryland-based biologist with the U.S. Department of Agriculture’s Natural Resources Conservation Service. All of the areas that will once again serve as an active flood plain are wooded; no cropland was taken out of production, he said.

“You have hundreds of acres on each side of the river that are there for use [for capturing floodwater], but they’re not being flooded,” Strano said. The NRCS is one of the project’s leaders.

Instead of shunting the water down the channelized river as quickly as possible, the new system will collect some of the flow in its floodplain. That brings an added benefit, Strano said. With less water gushing down the river in high doses, there should be less flooding downstream.

A flood gauge near the northern terminus of the current project area tells the story. Strano’s research shows the Pocomoke rose at least 6 inches above the level of its floodplain 4.3 times a year from 1997–2016. But since that flow was hemmed in by levees, the river typically only escaped its channel about once a year. 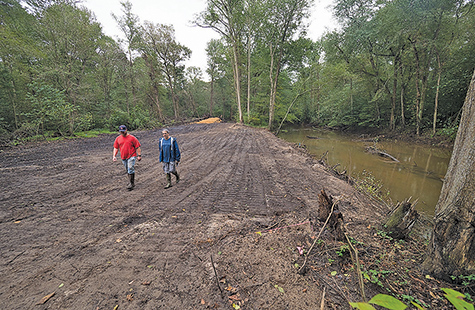 Brian Jennings, left, and Steve Strano check on a recently dug breach along the upper reaches of Maryland’s Pocomoke River. Officials hope the breaches will allow sediment and nutrients to be filtered from stormwater before reaching the Chesapeake Bay. Bay Journal photo by Dave Harp

In that regard, the river’s channelization was a smashing success. The Pocomoke River Swamp was once considered an “almost impenetrable wilderness” akin to the vast Dismal Swamp of Virginia and North Carolina, according to a pre-channelization description. The channel reduced the floodplain’s width by half — and in some parts, two-thirds — of its original size. By the 21st century, much of the upper portion of the river was flanked by a floodplain measuring little more than 1,000 feet, the U.S. Geological Survey found.

While the change gave neighboring farmers a wider berth for planting crops, it robbed the Chesapeake Bay of one of nature’s most potent filters. When the river’s water would spill into the floodplain, it stayed put for several days, if not weeks, Strano said. That was time enough for much of the floating sediment to settle onto the land and for wetlands plants and trees to soak up excess nutrients.

The Pocomoke’s wetlands also are a resting spot for migrating birds, ducks and other waterfowl, so enhancing that habitat became another goal for the restoration effort.

The flocks can grow so dense above the river corridor that they register as clouds on weather radar equipment, said Rich Mason, a wildlife biologist with the U.S. Fish and Wildlife Service’s Chesapeake Bay Field Office in Annapolis.

“As these flood plains cleanse water and you get cleaner water flowing downstream, that will benefit submerged aquatic grass in the ecosystem,” Mason said. “Those grasses are important for the ducks, so it’s sort of all connected. Sometimes, we look at things with tunnel vision, but it’s going to have broader benefits downstream.”

The restoration partners are striving to return the river to its natural course to the extent financially and logistically possible.

The biggest hurdle: Nearly two-thirds of the land needed for the initial phase of restoration was in private hands, Strano said. So, The Nature Conservancy negotiated with landowners to voluntarily provide easements. The property owners could receive about $2,000 per acre for permanent easements under the NRCS’s Wetlands Reserve Program or $250 per acre for 10-year agreements with the Conservancy.

Many of the landowners in the rural area have used their riverfront properties in the past for hunting, and they can continue to do so under the easements, Jacobs said.

Another obstacle was the scale of the work itself. From the start, the conservancy and its partners decided against leveling the entire 28-mile system of levees.

“In an ideal situation, we would take all the dirt piles and remove all of it and get it all out of there,” Jacobs said. “But economically, that isn’t feasible. So, we’re creating as large of a breach as we can to open up these floodplains.”

Each of the breaches stretches along 100 feet of shoreline and measure anywhere from 2–5 feet below the height of the adjoining levee.

Strano and Brian Jennings, an Annapolis-based Fish and Wildlife biologist, recently visited a breach off Whiton Crossing Road on an overcast but steamy morning.

About 100 yards to the west, the old Pocomoke River trickled beneath a road culvert and curved its way through the forest. It is one of several stretches where the old riverbed remains; elsewhere, it has been obliterated by the channel. But back to the east, where Strano and Jennings had pulled off the road in their pickup trucks, the channel was straight all of the way to the horizon.

They tromped a little ways along the shoreline to a breach dug in 2016. As agreed to by the restoration partners, no maintenance had been performed in the interim.

Strano and Jennings found a lush, green meadow of wool grass and soft rush. But they were most excited to spot tree seedlings. Most were no more than a few feet high, but there they were — oaks, willows, bald cypress.

“This is what I envisioned would happen,” Strano said.

Nature, it seems, is coming back. It just needed time and a flood of support from humans.