UM CRISIS, BEHIND CLOSED DOORS: What happened behind the closed doors of the University of Maryland Board of Regents meeting that led to President Wallace Loh’s decision to retire and Coach DJ Durkin’s salvation, at least temporarily? A team of Sun reporters puts together what apparently happened.

STUDENTS SEEK ROLE IN LEADERSHIP CHOICE: After a campus protest broke down in disarray over the issue of boycotting football, University of Maryland, College Park student groups signed a joint statement calling for a role in the selection of next president and that the Board of Regents be elected. Lillian Reed of the Sun reports.

UM SENATE CRITICIZES REGENTS: At its emergency session Friday, the University of Maryland Senate officially condemned the Board of Regents for “grossly exceed[ing] its authority” with its recommendations following the investigation into this university’s football program, reports Grace Mottley for the Diamondback.

McNAIR’s LEGACY: Tim Curtis of the Daily Record writes that the university should be prepared for the fallout from the death of football player Jordan McNair to become a part of its history and culture, similar to the legacy of former Terp basketball player Len Bias, the victim of a fatal drug overdose, said Terry Hartle, senior vice president at the American Council on Education.

SPORTS OVER ACADEMICS: In recounting the recent events at the University of Maryland College Park, the editorial board of the Washington Post writes that when the University System of Maryland’s Board of Regents decided to back the head football coach over the president of the University of Maryland, it was making a statement about its priorities. It was that sports and winning — and the money that goes along with big-time college football — matter more than academics and accountability. Thankfully, students, faculty and the community at Maryland’s flagship university have a far different set of values.

“LOH MUST GO”: In a column for his Political Maryland blog, Barry Rascovar opines that Wallace Loh should not be president of the University of Maryland’s flagship College Park campus, saying that Loh followed the wishes of UM’s board of regents, then defied them, by firing D.J. Durkin as football coach — without bothering to consult with the regents. This poisons Loh’s already shaky relationship with the system’s governing body. For years, Loh ignored mounting chaos and a deep divide within the athletic department’s top ranks.

COURT CHIDES JUDGE IN CONTEMPT CASE: The Maryland Court of Special Appeals has ruled a Baltimore judge exceeded her authority when she held five state Health Department officials in civil contempt over delays in providing psychiatric hospital beds to defendants referred by the courts, Michael Dresser of the Sun reports.

SUPREMES TO HEAR BLADENSBURG CROSS CASE: The U.S. Supreme Court has agreed to hear a case about whether the nearly 100-year-old, cross-shaped war memorial in Maryland known as Peace Cross violates the Constitution’s required separation of church and state. The case of the monument, located in the Bladensburg community of Prince George’s County, could impact hundreds of similar monuments nationwide, Jessica Gresko of the AP reports.

AMAZON IN ADVANCED TALKS WITH VIRGINIA: Amazon.com has held advanced discussions about the possibility of opening its highly sought-after second headquarters in Crystal City, including how quickly it would move employees there, which buildings it would occupy and how an announcement about the move would be made to the public, according to people close to the process, Jonathan O’Connell and Robert McCartney report for the Post.

DNR SPOKESWOMAN GETS INJUNCTION: A state spokeswoman who claims she was demoted after calling a candidate for governor an ‘a–clown’ on a social media posting has won her request for a temporary injunction against the Department of Natural Resources. Candus Thomson, a former reporter who has worked for the state Natural Resources Police for five years, is expected to retire on Tuesday, Bryan Sears of the Daily Record reports.

EARLY VOTING TURNOUT: Just about twice as many people voted early in Maryland and Virginia this election season as four years ago, with turnout eclipsing the entire 2014 vote total in some jurisdictions, writes Arelis Hernandez for the Post.

TRANSPORTATION WOES: Maryland and neighboring states in the Mid-Atlantic region are in the grips of a transportation crisis.  Roads and highways that used to be clogged by heavy “rush hour” traffic are now impassable in three- to four-hour cycles, in never-ending congestion. But solutions for the region’s transportation woes could be coming, write leaders of the Sierra Club in MarylandReporter.com.

FACEBOOK POSTINGS BITE BACK: Candidates’ social media posts have come into question in two key state Senate races as opponents focus on postings by two Republicans who are part of a statewide effort to whittle down Democratic power in the General Assembly. District 30 hopeful Ron George’s Facebook posts in 2015 and 2016 were the subject of a campaign against him — the posts question climate change, compare then-Secretary of State Hillary Clinton to Adolf Hitler and invoke a conspiracy about former President Barack Obama’s birthplace, among other things, Danielle Ohl of the Annapolis Capital writes.

BATTLE FOR THE 8th DISTRICT: For nearly three decades, voters in northeastern Baltimore County have sent a mix of Democrats and Republicans to Annapolis to form a “purple” district in the House of Delegates. This year, both parties believe they have a chance to pull the 8th District to their side, and have put up teams of candidates that mix new faces and experienced politicians, reports Pamela Wood in the Sun.

STATE HOUSE CANDIDATE PROFILES: In this election guide by the Cecil Whig, staff writers profile candidates for the State House from Districts 35, 35A, 35B and 36. Click on this link, then scroll down the list to find the districts you are interested in.

FINAL PUSH: Gov. Larry Hogan rallied with hundreds of voters in the Eastern Shore town of Grasonville Saturday, asking the crowd to make him just the second Republican to be re-elected governor in Maryland history. Meanwhile, Democratic challenger Ben Jealous hit campaign events in multiple counties at a breakneck pace — aided by the star power of actress Rosario Dawson and comedian Dave Chappelle — in his quest to become Maryland’s first black governor, the Sun is reporting.

MOMENTUM BUILDS: With Election Day fast approaching, both Republicans and Democrats in Maryland seem bullish on their chances. Can both be right? Josh Kurtz and Danielle Gaines of Maryland Matters write that Gov. Larry Hogan Jr. (R) remains the strong favorite for reelection over former NAACP President Ben Jealous (D). But Democrats, buoyed by early voting numbers and their strongest ground game in several election cycles, sense momentum. Even if that doesn’t fully accrue to Jealous, they believe it will boost their candidates in competitive down-ballot races.

SIGN OF THE SIGNS: For every Ben Jealous campaign sign that commuters see on the busy stretch of roadway near the University of Maryland in College Park, there are a dozen others heralding Gov. Larry Hogan’s reelection bid, Ovetta Wiggins and Erin Cox of the Post report.

CROSSOVER VOTES MATTER: Freestater Blog writer Todd Eberly, a political science professor at St. Mary’s College, predicts the Jealous-Hogan race won’t come down to 1 million Democrats voting, as Jealous believes. Instead, it will come down to the crossover votes that could go to Hogan.

JEALOUS, HOGAN BY THE ISSUES: The Sun editorial board offers up an issues comparison between gubernatorial candidate Ben Jealous and incumbent Republican Larry Hogan. The issues include public education, transportation and health care.

CIVILITY IN THE 6th DISTRICT: At a forum late last month, the candidates vying to succeed Rep. John Delaney in Maryland spoke of the importance of bipartisanship and restoring civility to political discourse. Yet the campaign of Democrat David Trone and a political action committee backing Republican Amie Hoeber have each sent 6th District voters mass mailers depicting the opposing candidate in less than civil terms, Paul Schwartzman of the Post reports.

PEREZ STUMPS FOR LOCALS: In their Politics Roundup for Bethesda Beat, Dan Schere and Louis Peck write about DNC chair Tom Perez stumping around his home turf and Amie Hoeber and David Trone tossing even more of their own money into their opposing campaigns for Congress.

SIMON SAYS: Neal Simon has told a number of people that Gov. Larry Hogan said he voted for him for U.S. Senate in his Independent run against Sen. Ben Cardin. In an interview with The Baltimore Sun, Hogan praised Simon and said he voted for an independent candidate among his choices for offices on the ballot, but declined to say whom he chose in any specific race, Jeff Barker and Luke Broadwater of the Sun reports.

SCHUH SCRUTINIZED OVER LAND PURCHASE: Anne Arundel County’s recent $2.6 million purchase of land near the Chesapeake Bay has come under scrutiny in the race for county executive, with the Democratic challenger accusing County Executive Steve Schuh (R) of paying an inflated price to bail out a political supporter, Katherine Shaver of the Post reports.

PITTMAN SEEKS DEVELOPER CASH: Arundel County executive candidate Steuart Pittman has solicited donations from developers — even after he attacked development money as creating a “pay for play” atmosphere and proposed banning it with a new law if he is elected, reports Selene San Felice for the Annapolis Capital.

PITTMAN, SCHUH PARADE: Anne Arundel County executive candidates Steve Schuh and Steuart Pittman have seemed to shrug off any pre-Election Day jitters. Both men say they’re confident the votes will swing in their favor, Lauren Lumpkin reports for the Annapolis Capital. As part of an effort to rally up voters, Pittman and Schuh both boarded floats at Sunday’s Thanksgiving Parade in Pasadena.

FICKER, FLOREEN, ELRICH MEET: With four days until Election Day, Montgomery County executive candidates Marc Elrich, Nancy Floreen and Robin Ficker appeared together on the debate stage one last time Thursday night. Dan Schere of Bethesda Beat writes about the event, which focused on development, Amazon and their visions for the county. 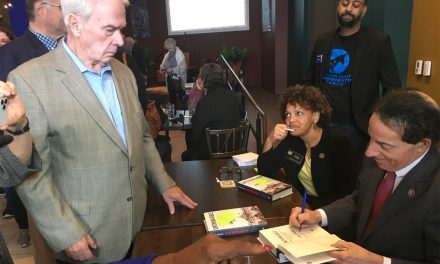