There’s a price to be paid, sometimes, for being at the head of the pack. In the case of Montgomery County, the price is $300,000. That’s the penalty the county agreed earlier this year to pay for its failure to curb pollution sufficiently from its streets, sidewalks, parking lots and buildings.

Under a municipal stormwater permit issued by the state in 2010, Montgomery was the first county in Maryland required to capture or treat runoff from 20% of its pavement and buildings. Eight other counties — Anne Arundel, Baltimore, Carroll, Charles, Frederick, Harford, Howard and Prince George’s have since gotten similar marching orders, as did Baltimore city and the State Highway Administration.

But in April, Montgomery County signed a consent decree with the Maryland Department of the Environment acknowledging it had fallen far short of the 20% goal. The county pledged to catch up over the next two years. It also agreed to either pay a penalty of $300,000 or spend that much on a pollution-reduction project that would go beyond what’s already required.

“You can always tell the pioneers, because they have the arrows in their backs,” said Frank Dawson, chief of watershed capital projects for Montgomery’s Department of Environmental Protection. “We’re not the only jurisdiction, I think, that’s having trouble.”

Montgomery may be the first held to account, but it’s far from the only locality to struggle with the daunting task of curbing stormwater runoff, a source of pollution that continues to grow across the Chesapeake Bay watershed even as progress is being made on other fronts. MDE officials say that while Carroll County, Baltimore city and the state highway system are “close” to complying with the 20% requirement, the rest are lagging.

“Stormwater [control] is not in the place it needs to be,” acknowledged Lee Currey, director of the MDE’s water and science administration. As state officials draw up plans for getting the rest of the way to the 2025 Bay cleanup goals set by the U.S. Environmental Protection Agency, he recently said that they’re looking at how to keep making progress while giving localities more leeway in meeting difficult stormwater reduction requirements.

Montgomery County’s shortcomings are notable because it has been widely considered a leader in Maryland in tackling polluted runoff. It was the first county in the state, for instance, to levy a stormwater cleanup fee on property owners — later derided as a “rain tax.” That “water quality protection charge” generated funds for retrofitting storm drains and other “best management practices” that would keep sediment and nutrients from washing off pavement and buildings into local streams and ultimately, the Bay.

But as state officials began figuring out how to comply with the “pollution diet” that the EPA had put the Bay on in 2010, they decided that they’d need to get Maryland’s older urban and suburban communities to do more to reduce the amount of nutrients and sediment coming from streets and buildings constructed before stormwater controls were required. Their tool of choice was the “municipal separate storm sewer system” permit each large community must have to discharge runoff from storm drains into local water ways.

Montgomery officials call the runoff reduction goal set by their 2010 stormwater permit “very aggressive.” It required doing twice as much as the county had been expected to do — and had achieved — in the previous five years. It called for capturing or treating runoff from 3,778 acres of the county’s impervious surface area that was paved or built over before modern stormwater regulations went into effect. That’s an area roughly three times the size of the city of Takoma Park, one of the municipalities in the county.

Complicating matters, environmental groups went to court to challenge the Montgomery permit, arguing it wasn’t rigorous enough. They ultimately lost, but the litigation delayed the official start of the permit. Montgomery officials didn’t wait, though, and began working toward the permit requirements even before the lawsuits were resolved.

“When we signed that permit, we took it very seriously,” said Patty Bubar, the DEP’s acting director. The county hired staff to ramp up planning and contracting out the work. It also increased the stormwater fee to cover the escalating costs of the growing number of projects.

From an initial annual rate of $12 for a typical household, the fee has risen to $104.25, while some businesses with large buildings or parking lots pay thousands of dollars a year. The rising charges prompted other lawsuits from aggrieved property owners, two of which are still pending.

Well before the deadline rolled around, it was clear Montgomery was not going to reach its goal. By the time the permit expired in February 2015, the county was less than halfway there, having restored stormwater controls on just 1,774 acres. Two years later, that number had grown, but was still 25% short of the goal. State regulators could wait no longer, so they took enforcement action.

County officials say it was just too much to try to do in such a short time period. In some cases, they point out, community objections delayed projects, resulting in delays to redesign or relocate them.

The county’s difficulties prompted a searching internal review. As they reviewed what had been done so far, they discovered that the county’s stormwater projects had actually treated runoff from a larger impervious area than previously thought. They also found that they hadn’t accounted for stormwater control measures installed on new development. Together, those added 800 acres to the total needed. 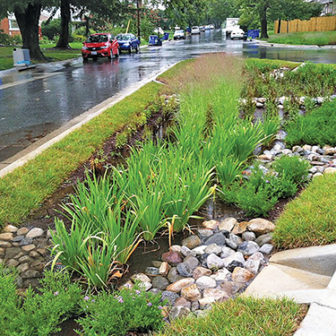 Rain gardens, bioswales and other green infrastructure, like this one on a residential Montgomery County street corner, capture runoff and reduce the flow of nutrient-laden stormwater to local streams. Environmental groups worry that as the county looks to cut costs, streams might suffer if small projects like this get dropped. Photo by Montgomery County Department of Environmental Protection

Now, county officials say they are “very close” to achieving the 20% goal and, with 18 projects now in the works, hope to get the remaining 850 acres needed by the end of this year — roughly 18 months ahead of the consent decree deadline.

What happens next remains to be seen. With the discovery that they are closer to compliance than previously thought, county officials looked to scale back. Worried that political support for the cleanup was being worn down, County Executive Ike Leggett called for halting the annual increase in fees. He proposed reducing the number of projects and farming out management of the stormwater effort to the private sector.

That drew criticism from environmental groups. They worried that privatizing and cost cutting would lead to the abandonment of “green infrastructure” projects, such as rain gardens, green streets, created wetlands, tree plantings and other measures that allow rainfall to soak into the ground or be drawn off by vegetation. Those tend to cost more per acre than large rainfall retention ponds, but do more to maintain the ecological vitality of streams.

Critics also questioned the county’s basis for scaling back its stormwater effort, noting that officials were projecting having to deal with runoff from just 5% of the county’s impervious surface in the next state permit, which has yet to be issued. That’s only a fourth of what Montgomery was required to do in its most recent permit.

“In this time when we’re seeing a lot of progress, we don’t think that now is the time to let up on any of our work,” said Caitlin Wall, chair of the Stormwater Partners Network, a coalition of three dozen local, regional and national environmental and watershed groups. “We’re obviously at a tipping point. We know the stormwater load is increasing across the region, and climate change is going to make things worse.

“Montgomery County has been a leader on clean water,” added Wall, who is Maryland and District policy director for the Potomac Conservancy. “From where we sit, we feel like we’ve come too far to let it go to waste.”

The County Council balked at approving Leggett’s budget plans for scaling back and privatizing the stormwater effort, and they overrode his line-item veto of their changes. In July, the council struck a compromise, which still allows the county administration to farm out a portion of the stormwater work to private consultants or contractors. It also doesn’t spell out how the county will pay for all of the $243 million in projects listed to be done.

Eliza Cava, with the Audubon Naturalist Society, said the compromise isn’t perfect, but that environmental groups were pleased it included commitments for more green infrastructure.

The Maryland Department of the Environment, meanwhile, is still mulling over ways to help the other jurisdictions reach the 20% finish line, as well as what actions the department will require in the next round of stormwater permits, due to be issued next year.

“It’s a challenging issue to deal with, with many trade-offs,” said the MDE’s Currey. While some localities appear to be on course, others are clearly struggling. And collectively, the state’s localities are spending $300 million a year on the effort.

More work to be done

The EPA, in its recent midpoint assessment of states’ Bay cleanup efforts, concluded that “while states have improved their regulatory programs, overall loads in this [stormwater] sector continue to increase due to population growth and development. Maryland and Pennsylvania committed to significant reductions … and will need to re-evaluate their strategies to meet the 2025 goals.”

Faced with those challenges, state officials haven’t decided how much impervious surface treatment to require in the next permits. To help those localities struggling now to get to 20%, Currey said they are considering allowing some water-quality trading.

The state’s trading regulations have yet to be finalized but, assuming they will be, localities might then apply nutrient and sediment reductions from another sector, such as wastewater, to cover gaps in stormwater reductions. Such trades would only be temporary, he stressed, giving them more time to complete the projects needed to reduce enough runoff pollution.

“This would allow them to achieve the equivalent water quality reductions to avoid that consent decree,” he said, “but we still need to advance stormwater restoration in these urban areas.… There’s still more work to be done.” 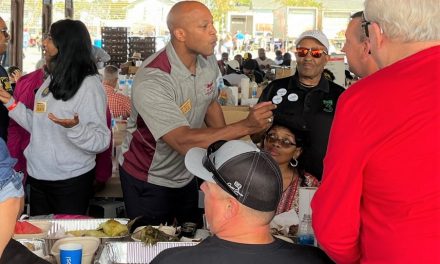