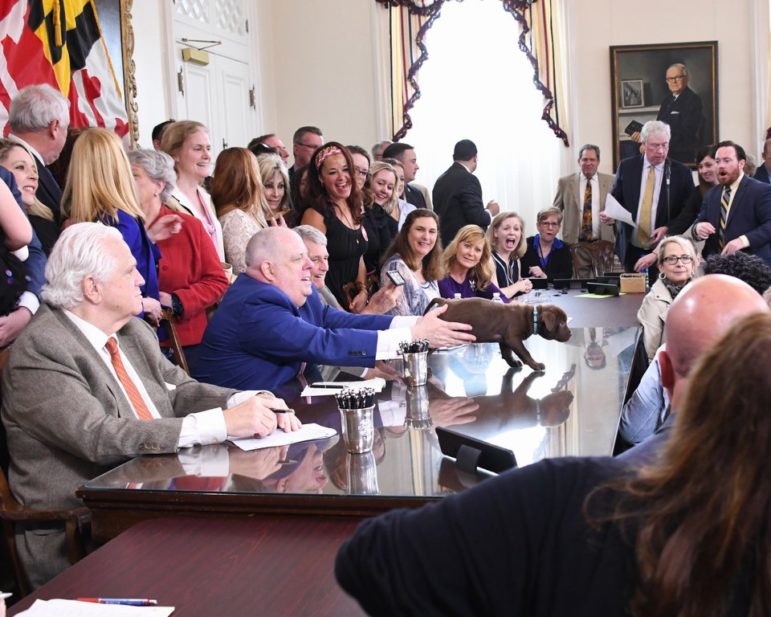 Dogs and puppies were all over the State House Tuesday as Gov. Hogan signed a bill relating to the sale of puppies. Governor’s Office photo

PUPPIES, PUPPIES, HOGAN: Puppy politics were on full display at the State House Tuesday as Gov. Larry Hogan signed three animal-friendly bills, including a ban on so-called “puppy mills.” Michael Dresser of the Sun reports that the pet-related measures were among 207 bills that the Republican governor signed in Annapolis on Tuesday — including new gun-control and crime-reduction laws that are expected to affect his reelection bid this year. The article is topped by video of Hogan and puppies. Lots of puppies.

FIREARM RESTRICTIONS: Gov. Larry Hogan has signed measures aimed at stopping gun violence, reports the AP’s Brian Witte. Hogan signed a bill into law on Tuesday to enable families and law enforcement to ask courts for an order to temporarily restrict a person’s access to firearms, if they are found to be a risk to themselves or others.

MORE THAN 200 BILLS SIGNED: The bills, some controversial, were among more than 200 signed by the governor Tuesday that also included legislation mandating defendants deemed incompetent to stand trial be transferred in a timely fashion to state hospitals, a bill aimed at finding homes for dogs used in research, and a measure meant to ensure that out-of-state companies pay taxes in Maryland, Bryan Sears of the Daily Record reports.

FRANCHOT WHACKED AGAIN: Much of the considerable acrimony between Comptroller Peter Franchot (D) and the General Assembly played out in public view during the just-concluded legislative session, but lawmakers saved one last swipe at the state’s tax collector for the chaotic moments just before adjournment. Bruce DePuyt of Maryland Matters writes. A small, under-the-radar bill to alter the process for administering an oath to members of the State Retirement and Pension System Board of Trustees was amended late on the session’s final day to mandate that the state treasurer chair the 15-member panel. There is an unwritten practice dating back decades, in which the more senior constitutional officer on the board — the treasurer or the comptroller — controls the gavel.

METRO WEIGHS LABOR CONTRACT: Metro is worried it could lose more than $180 million a year in penalties if a new labor contract is so costly that the transit system can’t keep its budget under a cap imposed by Maryland and Virginia in the landmark funding agreement, reports Robert McCartney in the Post. A three-member arbitration panel began a critical phase Monday in closed-door proceedings on a contract to set pay and benefits for Amalgamated Transit Union Local 689, Metro’s largest union.

ON HOGAN’s LATEST POLL NUMBERS: In his Roughly Speaking podcast, Sun columnist Dan Rodricks speaks with Mileah Kromer, director of the Sarah T. Hughes Field Politics Center at Goucher College, about the latest Goucher Poll that puts Maryland’s Republican governor, Larry Hogan, in a strong position to win a second term. But while Maryland Democrats, who outnumber Republicans 2-1, widely approve of Hogan’s job as governor, whether they vote for him in November remains an open question.

DUTCH BACKS KAMENETZ: U.S. Rep. Dutch Ruppersberger is backing Baltimore County Executive Kevin Kamenetz in the Democratic primary election for governor. Standing together at a small Randallstown park on Tuesday morning, Ruppersberger saidKamenetz has a track record of “steady and smart leadership” in Baltimore County that will help him lead the state, reports Pamela Wood in the Sun.

OAKS HEARING: An Anne Arundel County Circuit judge Tuesday set a hearing this week to reconsider whether to order the Maryland State Board of Elections to remove former state Sen. Nathaniel Oaks’ name from the June 26 Democratic primary ballot, now that he is ineligible to hold office, reports William Zorzi in Maryland Matters.

SIMON OUTRAISES CARDIN: U.S. Senate candidate Neal Simon outraised incumbent Sen. Ben Cardin two-to-one in the first quarter of 2018, but the Potomac businessman who is running as an independent has a long way to go to catch up to Cardin’s $2.68 million campaign war chest. Simon said the race will cost millions, reports Glynis Kazanjian for MarylandReporter.

MO CO COUNCIL CONSIDERS EQUITY TEST: Jennifer Barrios of the Post writes that Maryland’s largest jurisdiction is poised to create a new policy mandating that all its actions be weighed against how they might affect equity — racial and otherwise — among its roughly 1 million residents.

CLOSED MEETINGS: Fern Shen of Baltimore Brew writes a long piece about Open Meetings Law and how a task force exploring declining enrollment in the Baltimore City School System is apparently getting around it, much to the anger of a number of parents and school advocates.