HOUSE OKs $5.6B MORE FOR AMAZON: Opposition from lawmakers was across the board Wednesday as a final vote took place in the House of Delegates to ultimately approve a $5.6 billion tax incentive package to lure Amazon.com to Montgomery County, sending it to the governor, Glynis Kazanjian of MarylandReporter writes. 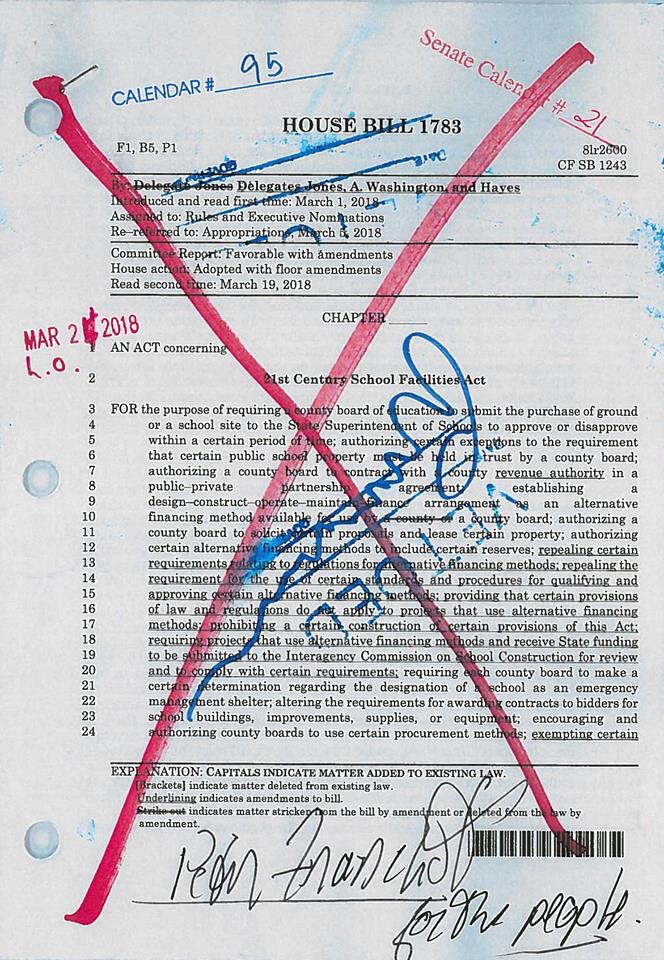 HOGAN VETOES SCHOOL CONSTRUCTION BILL: Gov. Larry Hogan pulled out a stamp and a red marker Wednesday to veto a bill that would overhaul the state process for vetting and approving the construction and renovation of schools, Scott Dance reports in the Sun.

DEL. SIMONAIRE’s PERSONAL STORY: When Del. Meagan Simonaire implored her colleagues Wednesday to ban conversion therapy for children, she spoke in the third person, as if the story she was telling had happened to someone else. The Anne Arundel County Republican spoke of a bisexual girl whose parents suggested using the therapy to “fix” her sexual orientation. Then Simonaire revealed the truth: She was that girl. Less than a week earlier, her father, state Sen. Bryan Simonaire, had argued passionately to keep conversion therapy legal, Erin Cox of the Sun reports.

BUMP STOCK BAN: The bump stock — a previously obscure gun accessory that became infamous last year when a shooter in Las Vegas used one to speed up his lethal rate of fire at helpless concertgoers — is on its way to being banned in Maryland, Michael Dresser of the Sun reports.

SEXUAL PREDATOR ACT: After failed attempts over more than a decade, legislation allowing prior sexual predatory behavior to be used in criminal prosecutions of alleged sex offenders passed the Senate unanimously Wednesday and was sent to Gov. Larry Hogan, Glynis Kazanjian of MarylandReporter reports.

UNION SEEKS ‘END TO MILLER TIME:’ A union known for advocacy on progressive policies is placing a target on one of the biggest figures in Maryland politics. Leaders of SEIU 500 have declared an “end to Miller time,” calling for a rally and hinting at an effort to oust longtime Senate President Mike Miller. The effort is the latest chapter in a long-simmering feud that appears to be close to boiling over from the perspective of the union. Miller, in an interview, said he didn’t know the leaders of the union, reports Bryan Sears for the Daily Record.

ANDERSON STEPS DOWN AS DELEGATION CHAIR: Del. Curt Anderson, a former broadcaster turned lawyer and legislator, announced Wednesday that he is stepping down as chairman of the Baltimore delegation to the Maryland House of Delegates after 12 years.

RX POT DIVERSITY BILL: A bill to diversify Maryland’s medical marijuana industry received final approval in the state Senate on Wednesday — after a similar effort to bring in more minority-owned businesses faced a bitter defeat in the final minutes of last year’s session, Rachel Chason of the Post reports.

BAN ON FOAM CONTAINERS MISGUIDED: In a guest column for MaylandReporter, city restaurateur Casey Jenkins writes that Baltimore City Mayor Catherine Pugh is asking for Baltimore City businesses to contribute more to the health of the city. But unfairly she is asking restaurants and hospitals to add an even bigger burden by eliminating inexpensive foam food containers.