Opposition from lawmakers was across the board Wednesday as a final vote took place in the House of Delegates to ultimately approve a $5.6 billion tax incentive package to lure Amazon.com to Montgomery County, sending it to the governor.

The bill, SB877, proposed by Republican Gov. Larry Hogan, promises to bring a minimum of 50,000 new jobs with salaries ranging from $60,000 to $500,000, if Amazon selects Montgomery as its location to build a second headquarters.

Northern Virginia and Washington, D.C., along with Montgomery and 17 other jurisdictions made Amazon’s top 20 list.

While Montgomery County’s House delegation voted unanimously to approve the measure, legislators from other areas of the state — Republicans and Democrats alike — had nothing nice to say about the bill. Many called it a job killer for small businesses. 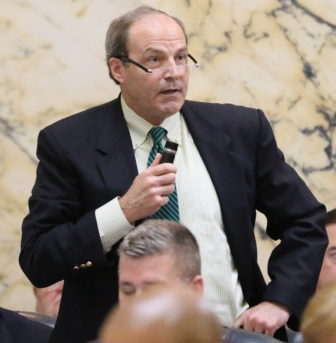 “Maryland is about to give one of the largest corporations — that just got a 14% tax cut in December and profited a trillion dollars last quarter — a $6.5 billion corporate welfare check paid,” said Del. Herb McMillan, R-Anne Arundel. “There is no free lunch, and someone’s tax dollar is going to have to fund a $6.5 billion unfunded mandate that this bill creates.”

McMillan said the costs would ultimately come on the backs of Maryland’s small businesses and middle class families.

One of the chief complaints includes giving such a large incentive to just one company.

Lack of tax incentives for other businesses

“There are empty warehouses up in Harford County, Baltimore County and Baltimore City along the I-95 corridor that we can’t seem to give any incentive for attracting businesses into, and I’m talking brand spanking new warehouses,”  said Del. Glen Glass, R-Harford. “We need these types of incentives across the state for all businesses by lowering our corporate tax structure.”

“I have a little bit of heartburn – no offense to my friends from Montgomery County – about backing up the Brinks truck to one particular jurisdiction,” said Carroll County Del. Haven Shoemaker.

The bill passed the House 78-60. Montgomery makes up the largest delegation in the state with 32 lawmakers, 24 members in the House.

Another lawmaker said by continuously offering large tax incentives to big companies, it keeps the state from working on its own tax policies.

“Our tax and regulatory policies are so bad,” said Del. Robin Grammer, R-Baltimore County. “Every time we have one of these big companies and we give them a special tax break, it allows us to sweep our problems of tax policies under the rug forever. As long as we continue to do this, we’re never going to have to face problems with our tax policies.”

Several lawmakers from major jurisdictions such as neighboring Prince George’s County and Baltimore City also voted against the bill, along with a sole lawmaker from Montgomery who is running for Congress in Maryland’s 6th Congressional District.

“I didn’t co-sponsor it,” Sen. Roger Manno, D, said in a phone interview. “I raised concerns about it to the committee. It’s a $5 billion tax cut for the wealthiest person on the planet. It’s unfair to the hard working Marylanders and the small businesses just trying to make it.”