BUDGET FINALIZED: House and Senate negotiators resolved their minor differences Monday afternoon on the state’s $44.5 billion budget. They added budget narrative directed at Comptroller Peter Franchot and any official running for statewide office, banning them from using state funds in ads or publications to promote themselves during this election year. They also approved $41 million in funding for school safety measures.  The meeting took place in a conference room renamed for the retired head of the Department of Legislative Services, Warren Deschenaux. MarylandReporter.com

9% TO PAY MORE TAXES: In an explainer for the Sun, Michael Dresser writes that despite repeated assurances from Gov. Larry Hogan, Senate President Mike Miller and House Speaker Michael Busch to protect all Maryland taxpayers after Congress passed President Donald J. Trump’s tax reform bill, 9% of Marylanders may still end up paying more. Dresser looks into how this ended up happening.

SAME DAY VOTING: The Sun’s Michael Dresser reports that the General Assembly has put a constitutional amendment on the Nov. 6 ballot allowing voters to register and cast ballots at their polling places on Election Day. Maryland already permits registration and voting on the same day during early voting. If the voters approve, Maryland would join more than a dozen states that permit Election Day registration.

HOGAN PROMISES VETO: A proposal to strip school construction decision-making authority from the Board of Public Works has Gov. Larry Hogan (R) promising prompt use of his veto power, Bruce DePuyt reports for Maryland Matters. “It’s outrageous,” Hogan said at a news conference Monday. “Probably one of the worst ideas I’ve ever heard of coming out of Annapolis.”

STOLEN DATA: The House of Delegates passed legislation Monday that would require internet service providers to notify Maryland customers of data breaches in which personal information was stolen, Chase Cook of the Annapolis Capital writes.

PROTECTING INSURANCE: Legislation expected to head to Gov. Larry Hogan’s desk this week could allow Maryland enough time to implement a tool aimed at reducing individual market premiums next year, writes Tim Curtis for the Daily Record. The legislation authorizing Maryland to seek a federal waiver to institute a reinsurance program has passed both the House and the Senate. There were no amendments to the House bill in the Senate.

TAX BREAK FOR ORGAN DONORS: The General Assembly gave final approval to legislation Monday night that would give a tax break to individuals who donate all or part of an organ to another person. The bill, which passed the Senate without dissent after earlier receiving a unanimous vote in the House, was sponsored by Speaker and transplant recipient Michael Busch. Gov. Larry Hogan has said he would sign the bill, Michael Dresser of the Sun is reporting.

CAPITAL BUDGET NEGOTIATIONS: Maryland’s capital budget is headed to a panel of negotiators, with no sign yet of funding for a proposed downtown Frederick hotel and conference center, the Frederick News-Post’s Danielle Gaines is reporting. “We’ll see this week, but I feel pretty good about it,” said Sen. Ron Young (D-District 3), who said he’s working with Senate budget negotiators to secure funding for the project. “… I think we have a good chance of something happening this year.”

COMPREHENSIVE CRIME BILL: Gov. Larry Hogan said Monday that more investigation is needed to root out Baltimore police corruption, and stressed that other reforms being considered in the General Assembly are needed to fix a larger “mess” in the city’s criminal justice system, Scott Dance of the Sun reports.

HOYER BACKS BAKER: House Minority Whip Steny Hoyer is backing Prince George’s County Executive Rushern Baker in his bid for the Democratic nomination for Maryland governor, a boost from a high-profile lawmaker with three months to go until the primary, Rachel Chason writes for the Post. Hoyer (D-Md.), whose congressional district includes parts of Prince George’s, said Baker is a “deeply good man” who has improved the lives of families in the county during his eight years as county executive.

BAKER NOT RESPONSIBLE FOR OLD LOAN: Prince George’s County Executive Rushern Baker is not responsible for a loan made when he was executive director of Community Teachers Inc. in 2003 because the collection agency did not prove he signed loan documents, the state’s intermediate court has held, reports Heather Cobun for the Daily Record.

ELECTION CHALLENGE RULED TOO LATE: Steve Lash of the Daily Record reports that Maryland’s top court unanimously ruled Monday, in rejecting a bid to unseat Judge Ingrid M. Turner, that an unsuccessful candidate for election to the Prince George’s County Circuit Court waited too long to challenge in court the constitutional qualifications of a successful opponent. 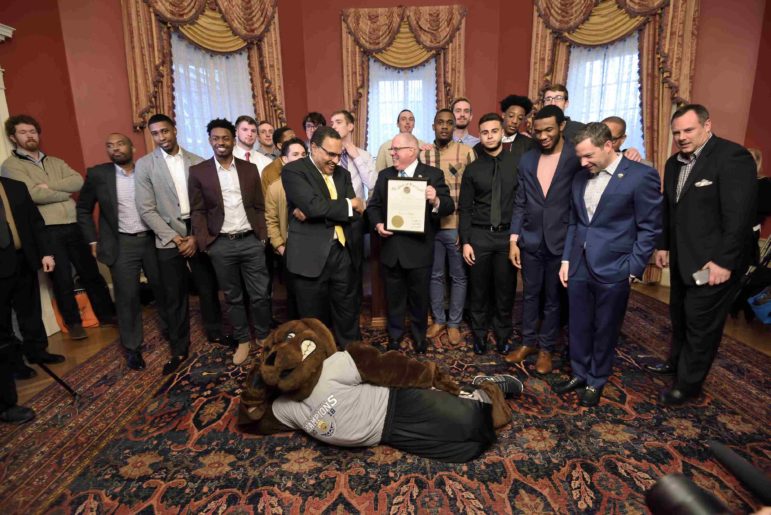 Gov. Larry Hogan hosted the UMBC Retrievers basketball team at Government House Monday night, along with their mascot. The team and school officials were later cheered and honored in both Senate and House for their historic win over the top-seeded University of Virginia team in the first round of the NCAA tournament. Governor’s office photo