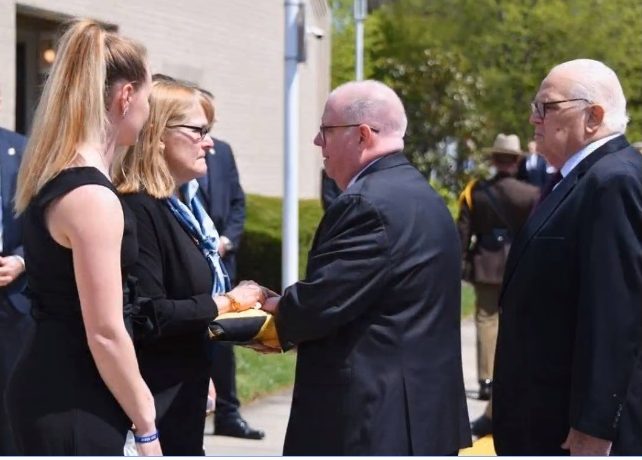 After the funeral service, Gov. Larry Hogan presents the state flag that draped the coffin of House Speaker Michael Busch to widow Cindy Busch, as Erin Busch and Senate President Mike Miller stand by. The flag had flown over the State House the day the speaker died. Governor’s Office photo.

SPEAKER BUSCH LAID TO REST: Pamela Wood of the Sun reports on Speaker Michael Busch’s funeral service, leading off with a story of a woman from the community of Parole who contacted Busch nearly daily “in a quest to keep open the last historically black school operating in Anne Arundel County. … Nearly two years later, with Busch’s help, Mills-Parole Elementary School not only was saved, but got a $3 million renovation.” 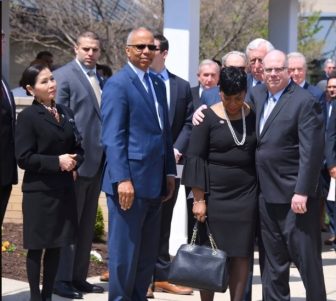 THREE-WAY RACE FOR SPEAKER: There’s now officially a three-way race to become the next speaker of the Maryland House of Delegates. Hours after a funeral Tuesday for Speaker Michael Busch, Democratic Del. Dereck Davis of Prince George’s County and Democratic Del. Maggie McIntosh of Baltimore confirmed they are campaigning for the post. They join Del. Adrienne Jones of Baltimore County in vying for the position, reports Pamela Wood in the Sun. A vote is expected May 1.

OPINION: MO CO CAN WIN IN SPEAKER’s RACE: Bethesda Beat Columnist Adam Pagnucco writes that even though no one running for House Speaker is from Montgomery County, Montgomery can still score a win in this race. He explains.

PRISON SMUGGLING ARRESTS: Federal authorities in Maryland dismantled yet another smuggling ring of prison guards and inmates allegedly peddling heroin, cellphones and pornography-loaded flash drives behind bars — in exchange for sex and payments via PayPal and Western Union money orders. Nineteen people were arrested Tuesday — including three prison guards — and charged with running the smuggling ring at the state’s medium-security prison in Jessup. Tim Prudente reports in the Sun.

WATER UTILITY ASKS STATE TO STOP PURPLE LINE CONSTRUCTION: Suburban Maryland’s water utility has asked state transit officials to “cease and desist” construction on part of the Purple Line that it says is perilously close to a major pipe that provides drinking water to Prince George’s County and would explode if broken, Katherine Shaver of the Post reports.

EDITORIAL: PRESS FREEDOM DAY: The editorial board for the Annapolis Capital writes that “today, Gov. Larry Hogan is expected to sign legislation making June 28 Press Freedom Day. The designation, proposed by state Sen. Sarah Elfreth and Del. Alice Cain, was passed overwhelmingly by the General Assembly as a way to memorialize the attack on the Capital Gazette newsroom that killed five of our colleagues.” But it also recognizes that newspapers make democracy healthier.

CONVENTION CENTER EXPANSION: Amid the noisy debate over the future of Pimlico Race Course and other last-minute business, the General Assembly passed another measure atop Baltimore’s wish list — a bill that would provide money for planning the expansion of the city’s convention center and construction of a new convention hotel, Meredith Cohn reports in the Sun. City boosters and tourism officials say the Baltimore Convention Center needs an overhaul to remain competitive and attract bigger groups.

OPINION: OLSZEWSKI LEADS: In a commentary for Maryland Matters, David Plymyer opines that “before Baltimore County Executive Johnny Olszewski Jr. announced the proposed county budget for the next fiscal year, I … was worried that he would be an amicable play-it-safe politician with one eye on the governor’s mansion rather than a genuine leader intent on turning around a county showing serious signs of decay. The budget includes a 37-cent increase in the local income rate, the addition of a development impact fee and small increases in other taxes. It demonstrates that Mr. Olszewski has the political courage to increase revenues to back up his campaign promises to preserve the quality of public facilities and services, especially schools.”

DUTCH SEEKS FUNDING FOR DIGITAL COASTLINE MAP: U.S. Rep. Dutch Ruppersberger has introduced a bipartisan bill that would fund a project to produce a digital map of all 95,000 miles of the U.S. coastline. Eugene “Jesse” Nash IV of the Capital News Service writes that coastal communities like Baltimore and Ocean City would benefit from the collection of geographic data about the nation’s coasts that would help prepare people against floods and storms, sponsors of the legislation said.

TRONE EYES OPIOID CRISIS, EARLY CHILDHOOD ED: U.S. Rep. David Trone (D-Md.), who has made opioid awareness a focus of his first term in the House of Representatives, started a three-day listening tour in western Maryland on Tuesday with a stop at the Frederick YMCA to discuss the effect of addiction on parents and children, Samantha Hogan of the Frederick News-Post reports. Of particular interest to Trone was Head Start, a federally funded early childhood education program for 3- and 4-year-olds in low-income families, which is run by the YMCA in Frederick County.