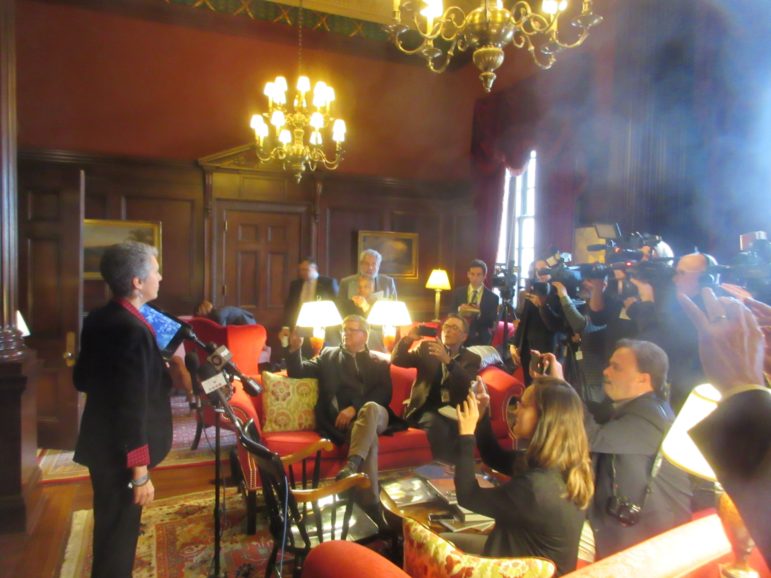 Sen. Cheryl Kagan plays the video for more than a dozen reporters and seven TV cameras in the Senate lounge Tuesday. MarylandReporter.com photo

LET’s GO TO THE VIDEO: Security footage from an Annapolis bar released on Tuesday shows a veteran lobbyist placing his hand on the back of a female state senator, sliding it down and possibly touching the top of her buttocks before he pulls away, reports Erin Cox for the Sun. Gil Genn, who obtained the video from CastleBay Irish Pub, said it shows he did not touch Sen. Cheryl C. Kagan inappropriately. The video is available on every site.

COVERING CASINO LOSSES: Glynis Kazanjian of MarylandReporter reports that lawmakers want to place a bet on Maryland casinos. If they change the law to ensure casinos aren’t taxed on losses, casinos say they will be able to bring in high stakes gamblers that would result in increased state revenues. They would also be able to make up for any lost revenue. The problem, at least initially, is that revenues for casinos would increase by an estimated $800,000 in the first year and the state’s Education Trust Fund would decrease by an estimated $150,000. Local revenues would suffer too, dropping $50,000, state fiscal analysts say.

COMMISSION SOUGHT ON BPD TASK FORCE: Sen. Bill Ferguson proposed creating a special commission Tuesday to investigate unanswered questions surrounding the Baltimore Police Department’s disgraced Gun Trace Task Force — including how high up the corruption went and whether anyone might have turned a blind eye to the officers’ actions, Luke Broadwater of the Sun reports. Introduced as an amendment to Ferguson’s bill that calls for regular state auditing of the city police department, the proposal would establish the Commission to Restore Trust in Policing.

PROSECUTING THREATS: Following a string of school lockdowns and evacuations, state Sen. Susan Lee of Montgomery County wants to knock down obstacles to prosecuting threats of mass violence against students and others. Lee last week introduced a bill to eliminate a requirement that prosecutors demonstrate the subjects of a threat were placed in fear or had to evacuate or take shelter. The legislation would also decrease the maximum prison sentence in these cases, unless the victims are minors, reports Bethany Rodgers for Bethesda Beat.

EXPANDING HATE CRIME BILL: When Del. Mark Chang was 7-years-old, he walked outside with his family to get into their car to handle some errands. The family was met with a gruesome sight: a dead cat hanging from a noose on a fence post on their property. Chase Cook of the Annapolis Capital writes that Chang hopes a hate crime bill he filed will hold people accountable who use nooses or swastikas as intimidation tools.

EVIDENCE BILL: House Republican leaders on Tuesday vowed to circumvent a powerful House Judiciary chairman by using parliamentary rules to petition a full House vote for a sexual predator bill if the bill did not receive a committee vote by Friday, writes Glynis Kazanjian of MarylandReporter. In an interview on the House floor Tuesday, Vallario said that the bill was in fact on the voting list. 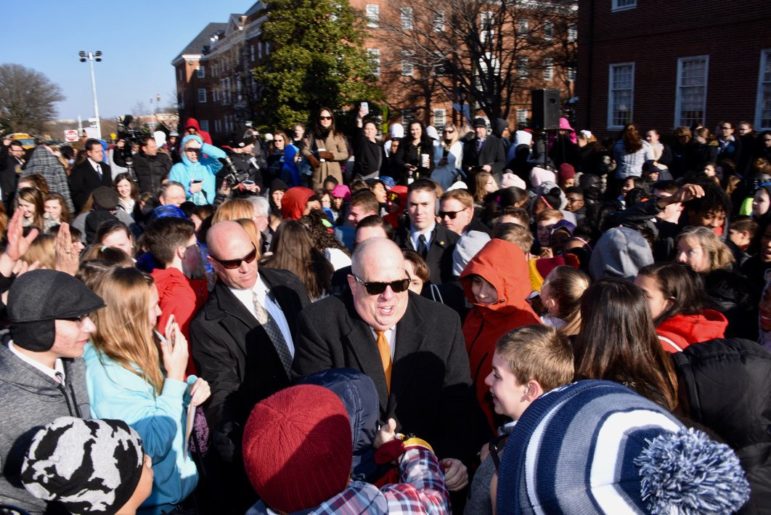 Gov. Larry Hogan greets some of the hundreds of students who rallied for state support of private schools. Governor’s office photo

PRIVATE SCHOOLS RALLY: Hundreds of private school students, faculty, parents and supporters piled onto Lawyers Mall in Annapolis on Tuesday for a rally to support Gov. Larry Hogan’s funding for nonpublic schools. Hogan, legislators and education administrators spoke at the event, put together by the Maryland Council for American Private Education to support the Broadening Options and Opportunities for Students Today program — or “BOOST,” Sean Wooley of Capital News Service reports.

PIPELINE PROTEST: Clean-water activists plan to protest a natural gas pipeline today, demanding from the steps of the Maryland statehouse that Gov. Larry Hogan (R) halt the project before the state loses the power to intervene, Rachel Chason of the Post reports. But a spokeswoman for the governor says the issue is for the federal Army Corps of Engineers to decide.

FOOD CONTAINER BAN: Just as Baltimore approved a ban on polystyrene foam food containers, a General Assembly proposal to prohibit the materials from restaurants and schools across Maryland appears in peril, reports Scott Dance in the Sun. A House of Delegates committee voted it down Friday, and a Senate panel raised concerns about it Tuesday.

PHONE APP WOULD AID AT-RISK FAMILIES: Del. Mike McKay, R-Washington/Allegany, is sponsoring a bill to provide for development of a smartphone application for parents at risk of drug abuse and overdose to check in with the Department of Social Services to let them know they — and their children — are OK, Tamela Baker reports for the Hagerstown Herald-Mail. McKay told the House Health and Government Operations Committee on Tuesday that he believes there’s “evidence of an issue that needs to be taken care of. There are consequences to our choices.”

FIXING INMATE TREATMENT PROGRAM: The editorial board for the Annapolis Capital opines it is time for Maryland to fix a broken system that is geared toward helping inmates get treatment for drug and alcohol addictions that may have pushed them into crime in the first place. They were never intended to drastically curtail inmates’ sentences — let alone to be a shortcut back to the street for violent offenders. But that is what they did.

SEN. NORMAN PLAZA: In tribute to a fallen member, the Senate Judicial Proceedings Committee on Tuesday unanimously approved legislation to name a plaza near the Bel Air district courthouse in memory of Sen. H. Wayne Norman Jr., who died in his sleep March 4 at age 62, Steve Lash of the Daily record reports.

POLL SHOWS HOGAN WINNING: Republican Gov. Larry Hogan would win a second term in a matchup against either of two leading Democrats, if the November general election were held today, according to a GOP poll released Tuesday. William Zorzi of Maryland Matters writes that according to the poll Hogan would take more than 50% of the vote in a hypothetical race against either Prince George’s County Executive Rushern Baker or Baltimore County Executive Kevin Kamenetz.

MO CO TEACHERS BACK CHALLENGERS: The Montgomery County Education Association, in its latest round of endorsements, has opted not to support the re-election bids of two current members of the state legislative delegation: District 17 Del. Jim Gilchrist of Rockville and District 19 Del. Marice Morales of Silver Spring. Among those tapped are eight non-incumbent candidates vying for seats in the county’s 24-member contingent to the Maryland House of Delegates in the June 26 Democratic primary, Louis Peck of Bethesda Beat writes.

CLOSER LOOK AT PUBLIC FINANCING: In Part 1 of a series of stories on the historic use of public financing of campaigns in Montgomery County’s county races, Adam Pagnucco of Seventh State writes that so far, we know the following things about public financing: it is heavily used (especially in the council at-large race), it is administratively challenging, it requires a long time to raise money, it is less costly than first thought and while it creates opportunities for new candidates, it confers huge benefits on incumbents.

CARROLL BOARD FINALLY PASSES ETHICS BILL: After eight years of being noncompliant, the Carroll County Board of Commissioners voted 4-1 on Tuesday — with Commissioner Richard Rothschild, R-District 4, in opposition — to move forward with an ethics ordinance that meets state requirements, though the vote came after a more than two-hour meeting filled with arguments, shouting and accusations, Emily Chappell of the Carroll County Times reports.