Is organic farming good for the Chesapeake Bay?

Organic agriculture is the fastest growing sector of the food industry in the United States, and its footprint in the Chesapeake Bay watershed is growing in kind.

The brand of agriculture that eschews the use of pesticides, herbicides, antibiotics and genetically engineered ingredients now makes up 20 percent of Perdue Farms’ poultry production on the Delmarva Peninsula, where the company is headquartered.

Smaller poultry producers in the region also are growing their organic operations at a steady clip: Bell & Evans, based in Fredericksburg, Pa., sells its chicken meat to high-end retailers such as Whole Foods Market, launched its line of organic products in 2009 and opened a certified organic hatchery this year.

As organic poultry production increases, so does the demand for organically grown grains to feed the birds, such as corn and soybeans, much of which comes from outside the country. But that’s beginning to change — and could represent a significant shift in land use for the Bay watershed. Perdue, alone, is buying organic grains grown on more than 13,000 acres of cropland across the region, and seeks much more.

The practices that earn poultry and grain producers the U.S. Department of Agriculture’s organic label may keep certain pesticides, antibiotics and hormones out of foods, but are they necessarily better for water quality and the Bay than conventional agriculture?

“The basic answer is, it depends on if you’re a good organic grower or not,” said Michel Cavigelli, lead scientist on the U.S. Department of Agriculture’s Farming Systems Project in Beltsville, MD. “Not all organic is equal, and not all conventional is equal.”

Comparing organic and conventional practices on mid-Atlantic soils is just what Cavigelli’s team has been doing for more than 20 years. The project has measured the performance of conventional and organic cropping systems by applying the different management systems to fields planted with the same crops.

Nutrient runoff is one of several factors monitored that has implications for local water quality. When asked whether the growth of organic practices in the watershed could be good for the Bay, Cavigelli began with the caveats.

For starters, he said, each type of farming comes with tradeoffs: Conventional growers use genetically engineered seeds and herbicides to combat weeds; organic growers till their fields to suppress weeds, which can lead to erosion and nutrient runoff when compared with farms that practice no-till cultivation.

The project’s findings so far indicate that organic fields typically have less phosphorus, nitrogen and sediment runoff than conventional plots — unless those conventional plots are no-till. That is, in part, because organic farms tend to build organic matter in the soils over time, which helps fields retain water and nutrients. But some of that work is undone when an organic farmer, rather than using herbicides, tills the soil to prevent weeds.

About a quarter of cropland acres in the country are farmed using no-till practices, according to the latest U.S. Census of Agriculture in 2012. Another 20% of those acres were farmed with other “conservation-tillage” practices aimed at minimizing soil disturbances.

Maryland farmers had the highest percentage of no-till acres at 55% in 2012.

Less run-off from no till

“Based on our studies, no-till has less runoff of silt and nutrients than any other method we use, including organic,” Cavigelli said.

Since time immemorial, farmers have fertilized and plowed croplands in the spring to turn over the soil and prepare it for planting. But heavy spring rains can wash fertilizer and soil from bare fields. The nutrients from fertilizers and sediment from freshly plowed fields run off into nearby ditches and streams, eventually winding up in the Bay.

No-till farming, which began taking root after the 1930s Dust Bowl, leaves the soil undisturbed from the fall harvest through winter. In the spring, seeds are planted in narrow slots that are “drilled” into the ground.

In the short-term, the runoff-control benefits of no-till farming edge out organic. But if the crop rotation pattern is repeated for decades, with organic fields devoting acreage to cover crops for longer periods, Cavigelli said, the organic fields could end up performing better on overall nutrient absorption in the long haul.

“We’ve been improving conventional for 100 years now,” he said, referring to technological improvements that have reduced conventional farming’s impacts on water quality over time, “and organic for just 20 years or so. There are trade-offs between all these systems, but it seems there’s a lot of room for improvement with organic.”

Cavigelli acknowledges that his work focuses on just a few aspects of the many comparisons that can be drawn between the farming practices. There’s another factor to consider — fertilizer use.

Organic crops typically use less nitrogen to begin with, or rely on slow-release forms of nutrients such as manure that reduce the risk of nutrient runoff and leaching. While organic advocates bring that up as a water-quality advantage, other research indicates organic farming practices can leach just as much nitrate as conventional farming systems if the goal is to maintain the same crop yields.

With manure application, “it’s more difficult to be prescriptive,” said Ken Staver, research scientist at the University of Maryland College of Agriculture and Natural Resources. “When you use chemical fertilizers, there are methods to apply it very precisely and to apply it closer to where the crop uptake is” to reduce nutrient loss.

But that comparison only holds true if the fields are planting the same crops. If organic agriculture does, in fact, plant more perennials such as alfalfa, Staver added, “that will always lower the nutrient loss.”

The view from the riverkeepers

As a riverkeeper who grows organic grains for Perdue chickens on Maryland’s Eastern Shore, Jeff Horstman views the intersection of agribusiness and water quality from a unique perspective. Horstman is the executive director of ShoreRivers, a new consolidation of watershed advocacy groups on the peninsula — the Midshore Riverkeeper Conservancy, the Chester River Association and the Sassafras River Association.

Those organizations’ priorities have at times diverged from those of local poultry producers, to put it mildly. The Waterkeeper Alliance, the umbrella organization for riverkeeper groups like his, filed an unsuccessful federal lawsuit seven years ago accusing Perdue and one of its contract growers of polluting a Bay tributary.

The case, dismissed by a judge after a lengthy trial, left a trail of lingering bitterness and suspicion between farmers and environmentalists.

But Horstman and others see in organic agriculture a growing opportunity to find common ground.

“I moved back to the family farm and one of the things I wanted to do was become an organic farmer,” said Horstman, whose grandfather, J.?I. Rodale, founded the Rodale Institute, a nonprofit devoted to organic farming research in Kutztown, Pa. “I appreciate what Perdue does for the Shore and how they’re trying to cultivate organic. I think agricultural diversity is good, and organic is a step toward that.”

This fall, the farmland Horstman inherited on the Wye River in Queenstown produced its first crop of organic corn — 170 acres of it — to be sold to Perdue for chicken feed. 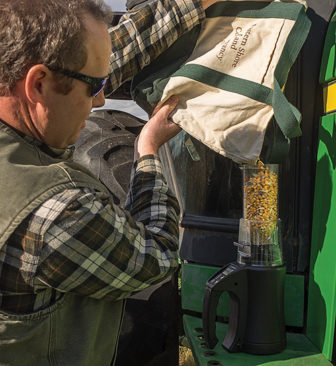 Perdue got into organic poultry with its purchase of Coleman Natural Foods in 2011. In response to growing consumer demand, Perdue has since converted a poultry plant in Milford, Del., and a feed mill in Hurlock, Md., to process only certified organic products.

The company has been spreading the word among local growers that it needs organic grains — and that the price is right. This season, farmers could get closer to $10 per bushel for organic corn, which can come with lower yields, compared with $3 a bushel for conventional.

But a farmer who decides to grow organically on a piece of land in 2017 typically would have to wait until 2020 to sell its first organic crop because of a three-year transition period required by the organic label.

“The nice thing about the larger outfits like Perdue is, because they need it and have the capacity, they’re willing to do a contract that reduces your risk and locks in a price early,” said Matt Nielsen, the farmer who’s growing organic grains on Horstman’s land.

But is all that better than the alternative when it comes to local water quality?

“The soil will truly benefit from a lot of different types of agriculture,” Nielsen said. “I’m not sure if you can conclusively rule organic as better or worse, but I do know that there are things we do in organic that have benefits.”

For Horstman, growing organic grains is a good place to start — both for his family farm and for the local water quality he’s concerned with protecting. Like the consumers who are fueling the organic industry’s growth, Horstman is concerned about the environmental and health impacts of conventional agriculture: its reliance on pesticides and herbicides and the way it bolsters an intensified approach to both grain and meat production.

Steve Levitsky, Perdue’s vice president of sustainability, said the company’s ultimate goal is to make organic poultry more affordable for consumers — and sourcing more organic grains from the Bay watershed, rather than overseas, would help.

“Part of the equation is getting more organic grown on the Eastern Shore,” he said. “That would also help the local grain farmers get higher premiums for their crops, and maybe they won’t need as large of a land mass to be viable.”

Perdue growers produced almost 40 million organic chickens in the Bay region in 2016, or 20% of the company’s regional production, with 80 percent of those houses in the Lancaster region of Pennsylvania and the rest on the Eastern Shore.

There are several reasons that organic chicken costs more at the grocery store, and some of them have stronger links to environmental benefits than others. For starters, organic chicken feed can cost two to four times as much as conventional and accounts for most of the increased costs of organic meat.

Organic poultry houses include additional amenities, such as windows, “enrichment” equipment and access to the outdoors, that contribute to higher costs. They also have less density and, therefore, produce slightly less manure per acre. While all organic poultry — and the resulting chicken manure — is antibiotic-free, Perdue also eliminated the routine use of antibiotics in its entire operation last year.

Alicia LaPorte, campaign manager for Fair Farms Maryland, a coalition of environmental and public health groups that advocate for better farming systems, said Perdue’s commitment on antibiotics changed the industry, with other retailers and producers following suit. That gives her hope that incremental changes, including producing more poultry organically, can, too.