MarylandReporter.com will expand its coverage this legislative session by reporting on actions impacting the state’s worsening addiction crisis. This epidemic is at once personal and ubiquitous. It involves just about every neighborhood in Maryland, yet each has unique needs.

Opioids have the upper hand here, despite the best intentions of elected and appointed officials. Maryland has good fortune to house two of the best academic medical centers in the world and the National Institutes of Health; and proximity to the expertise in and around the nation’s capital.

From kindergarten to graduate school, education clearly is Gov. Larry Hogan’s priority in this election year. The proof is spelled out in his administration’s $44.4 billion operating budget for FY 2019 delivered to the Maryland General Assembly Wednesday.

To the chagrin of health professionals and advocacy groups, new funding for Maryland’s opioid “state of emergency,” declared by Hogan last March, is not as hefty as expected. The state’s upward trend in fatal and non-fatal overdoses began in 2010, and between 2015-16 deaths soared 66%, the highest per capita increase in the nation.

Community behavioral health providers get only a 2%  increase even though last year’s emergency HOPE Act, which the governor signed, specified they would get 3.5%.

Meanwhile, Hogan’s new budget provides K-12 support of $6.5 billion, higher than statutory formulas require. It means all of Maryland’s 24 jurisdictions will receive more funding than in the current fiscal year.

Betty Weller, the president of the Maryland State Education Association, the largest teachers union, complained about $17 million in cuts to some smaller education programs as well as $9 million in funding for the BOOST private school voucher program.

Funding for the addiction crisis comes from federal and state sources. In the new budget, $153 million goes to existing non-Medicaid programs, and $13.7 million “augments the state’s response to the heroin/opioid epidemic,” the governor’s office says.

The Opioid Operational Command Center, within the state’s Behavioral Health Administration, coordinates substance abuse policies and procedures among multiple state agencies. In the new budget, it receives an additional $700,000 to bring the FY19 total to $13.7 million. Part of the increase funds a third full-time position.

Within a month of taking office in 2015, Hogan made good on a campaign promise to face head-on what was then primarily a heroin crisis. He created a statewide task force chaired by the lieutenant governor and gave it a year to assess the situation and make recommendations. At the same time, an inter-agency coordinating council convened to prepare for implementing task force recommendations.

Despite these approaches, overdoses increased rapidly and other potentially fatal substances appeared, like fentanyl and carfentanyl. In 2017, the Opioid Operational Command Center became the governor’s third approach to the epidemic. Its director is an emergency management specialist, and the center runs along federal emergency management guidelines.

Maryland grapples with national crisis of mental illness in jails 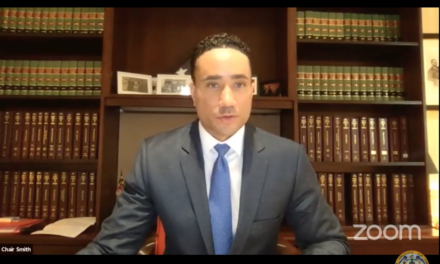