WOMEN IN ANNAPOLIS FEAR COMING FORWARD: Female lawmakers who say they have experienced, witnessed or heard about sexual harassment in Annapolis are pushing for changes to the Maryland General Assembly’s anti-harassment policy, which they say does not adequately address a pervasive culture of misconduct. However, the Women Legislators of Maryland group is working mostly behind the scenes, writes Ovetta Wiggins for the Post. “There is not really a safe environment to discuss the issue. It’s not something that people really want to be addressing,” said one female lawmaker, who like most people interviewed declined to be named out of fear of reprisal.

RAPISTS’ PARENTAL RIGHTS: Gov. Larry Hogan (R) said Friday that he supports a bill that would allow women who become pregnant as a result of a rape to terminate their attackers’ parental rights and is willing to sign it as soon as the General Assembly approves it, Ovetta Wiggins of the Post writes. The measure has failed nine times, including in the final hours of the 2017 legislative session. But this year, it is a priority of the 90-day session, which begins Wednesday.

TRUMP EFFECT ON ANNAPOLIS: Erin Cox and Michael Dresser of the Sun report that Congress and the Trump administration will force Maryland’s political leaders to forgo their election-year tradition of limiting controversy when the General Assembly meets this week. Instead, state lawmakers gathering Wednesday in Annapolis for the 2018 session will wade into the messy business of rewriting Maryland’s tax code and deciding whether any residents should have to pay more in state taxes.

FREDERICK BILLS: Danielle Gaines of the Frederick News-Post writes about the bills that have been or will be presented in Annapolis by Frederick County delegates and senators.

SICK LEAVE DISCLOSURE: Fenit Nirappil and Josh Hicks report in the Post that the Gov. Larry Hogan, a pro-business Republican, is lambasting a provision in the vetoed bill that allows businesses to ask workers who take more than two consecutive days of paid leave to verify why they need the time off. Business pushed for the provision last year. But the governor says it undermines the privacy of workers, including victims of sexual assault and domestic violence, who under the law are entitled to “safe” leave to seek medical or legal help.

REP. CUMMINGS ILL, WIFE DROPS RUN FOR GOVERNOR: Democratic gubernatorial candidate Maya Rockeymoore Cummings suspended her campaign Friday “due to personal considerations.” Erin Cox and John Fritze of the Sun report that that later in the day, Baltimore Rep. Elijah E. Cummings, her husband, announced that he has been hospitalized for the past week in the latest in a string of health setbacks. 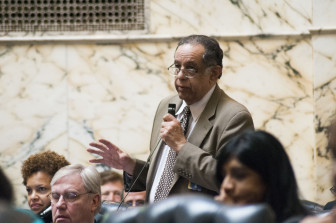 FRANK TURNER RETIRING: Del. Frank S. Turner, a veteran Howard County Democrat who played a central role in passing legislation bringing casinos to Maryland, said Friday that he will not seek re-election in November, Michael Dresser reports in The Sun. “I think 24 years is enough time to spend in Annapolis,” Turner said. “I think I’ve earned a rest.”

Md. SCHOOLS NOT AS GOOD AS THOUGHT: Weeks before Gov. Larry Hogan took office in 2015, Maryland schools had already slipped to third place as Education Week began to give more weight to student outcomes. Even if the complicated Quality Counts rating standards were not questionable, Maryland’s slipping ratings are based mostly on lagging data from test scores in O’Malley budget years. And except for Hogan’s first budget, where one optional school aid formula was only partially funded, the current governor has increased education aid every year — just as the law mandates him to do, Len Lazarick writes for MarylandReporter.

FROZEN SCHOOLS: If Gov. Larry Hogan was handing out grades on how Baltimore City is handling its cold schools crisis, the district would get an F, Tim Tooten reports for WBAL-TV. Hogan addressed the issue Friday as the school system works to reopen schools this week. Friday marked a second day of no school in Baltimore because of weather conditions, and another day of criticism.

FUTURE OF MAGLEV: Luz Lazo of the Post writes that enthusiasm, and opposition, is growing for the proposed maglev train between Washington and Baltimore. Opponents are asking state and federal officials to kill the project. And proponents say the project would ease travel in the congested Interstate 95 corridor, but many residents are concerned about the environmental impact and the homes that would be taken to make way for the line.

LAWMAKERS TO ADDRESS METRO FUNDING: Robert McCartney of the Post reports that in a bid to cover a financial gap that has hampered Metro since its creation, state lawmakers in Virginia and Maryland will consider bills to give the agency a permanent, dependable source of funding worth hundreds of millions of dollars a year.

LEGISLATIVE ISSUES: The weekend edition of Dan Rodricks’ Roughly Speaking podcasts featured Sun reporter Talia Richman on the Baltimore City schools’ latest crisis: cold classrooms; and State House bureau chief Erin Cox on the General Assembly, which opens on Wednesday for its annual 90-day session. Cox sizes up the major issues facing the legislature, all of them resulting from the actions or inactions of the Republican-controlled Congress. Plus, 2018 is an election year, with Gov. Larry Hogan facing re-election and several state legislators facing primary challenges, thickening the state’s political plot.

MEDICAL POT OR YOUR GUN? Now that medical marijuana is legally available in Maryland, some who want to use the drug to manage health problems face a dilemma: To get the pot, they surrender their right to own a gun, writes Ian Duncan for the Sun. The question arises because marijuana, even for medicinal purposes, is still illegal under federal law. Authorities have long made it clear to gun dealers that they shouldn’t sell to people who use marijuana medically, and federal law prohibits drug users from owning guns.

CARROLL GETS NEW ANNAPOLIS LIAISON: As the 438th legislative session of the Maryland General Assembly begins in earnest Wednesday, Jan. 10, Carroll County government will have a new voice representing them in Annapolis, one that they, and those in the state capital, are quite familiar with, the editorial board for the Carroll County Times opines. Mike Fowler, who spent more than 40 years working for Baltimore Gas & Electric in several capacities, was announced as the new legislative liaison for the county last week.

BAY IMPROVES, OTHERS DO NOT: The Chesapeake Bay has for decades struggled with “dead zones” — areas where water contains little or no oxygen, sometimes causing massive fish kills. But while the problem has eased in recent years here, it has developed and worsened elsewhere around the globe, according to new research, Scott Dance of the Sun reports.

MORE CLEAN ENERGY: Community solar specialist Gary Skulnik writes in Maryland Matters that with the White House’s war on clean energy and the environment, Maryland needs to turn 2018 into the year we step up our commitment to a cleaner, greener future. The best way to do that is to adopt the Maryland Clean Energy Jobs Initiative as soon as possible.

SUPPORT FOR RENEWABLES: A poll set to be released today shows strong support for renewable energy in two battleground state Senate districts – one in Baltimore County and the other on the Eastern Shore, writes Josh Kurtz for Maryland Matters. The survey also shows stark potential electoral implications for candidates in the two districts – which Republicans are targeting this year.

SCHUH’s DRUG-FIGHTING EFFORT: The editorial board for the Annapolis Capital is praising Arundel County Executive Steve Schuh’s legal efforts to fight the opioid crisis by hiring a law firm to investigate and sue opioid manufacturers, distributors and local doctors accused of converting their practices into “pill mills.”

NEW DELEGATE CANDIDATE: Selene San Felice of the Annapolis Capital writes that a fourth candidate has announced her bid to represent Annapolis as a state delegate. Annapolis resident Mary Reese (D) says she will run for District 30A, focusing on stricter environmental legislation, solving the opioid crisis with rehabilitation and veterans support.