A meeting of the Kirwan commission. MarylandReporter.com photo

The Kirwan Commission on Innovation and Excellence in Education wrapped up its preliminary report Monday during a sometimes contentious discussion over how much the massive $1.3 billion infusion of new education funding from 2002 to 2008 had improved Maryland schools.

The draft preliminary report based on a 16 months of meetings and consultant studies begins with a “Call to Action” that emphasizes how average Maryland schools are when compared to other states and best performing schools in the world.

Some commission members wanted to qualify that and similar statements to give more credit to increased funding from the Thornton Bridge to Excellence aid program.

“We do have to acknowledge the benefit of the Thornton funding,” said David Helfman, executive director of the Maryland State Education Association, the largest teachers union. “We have languished” since 2008, Helfman said. “The challenges and the demographics have changed.”

David Steiner, a commissioner who heads the Johns Hopkins Institute for Education Policy and is also a member of the State Board of Education, said, “I don’t see the argument that there was real improvement.”

Commission chairman Brit Kirwan, the former university system chancellor, was insistent, “We have to shake up the people of Maryland or nothing is going to happen.”

The arguments went back and forth over what the test scores and other data meant. The commission’s chief staff person, Rachel Hise from the Department of Legislative Services, said some of the arguments oversimplified the issue, suggesting that “If we just had more money, our scores would be better. That’s not the full answer. That’s part of the answer.”

Scott Dorsey, president of Merritt Properties and the only business executive on the commission, said, “Clearly we’re not where we are due to how much we’ve spent — it’s how we’ve been spending it. This is an existential crisis.”

Chester Finn, a long-time education policy expert on the state school board, said, “We’ve been trying to weaken a relatively weak document.” He asked if he could make personal comments in the report, but the commission voted down that idea, saying it would reduce the impact of the report.

“I’m sure everyone in this room wants to change something in this report,” Kirwan said. “I know I do.”

“We have come a long, long way and reached a pretty broad consensus,” he said.

“We’re going to have plenty of time to disagree,” said Sen. Paul Pinsky, vice chair of the education committee. “The next step is going to be a hell of a lot harder.”

In the next step, the commission is creating four or five work groups to meet during the legislative session that begins Wednesday to flesh out specific details and come up with cost estimates that may force changes in the recommendations.

Some of the commission’s more drastic suggestions, like big changes in teacher training, may take a decade to implement.

The commission does not expect to finish its work until June, but it will propose a small package of six bills this session. They include:

Here is a graphic summary of the commission’s main policy areas and its nine building blocks for a world-class education system. 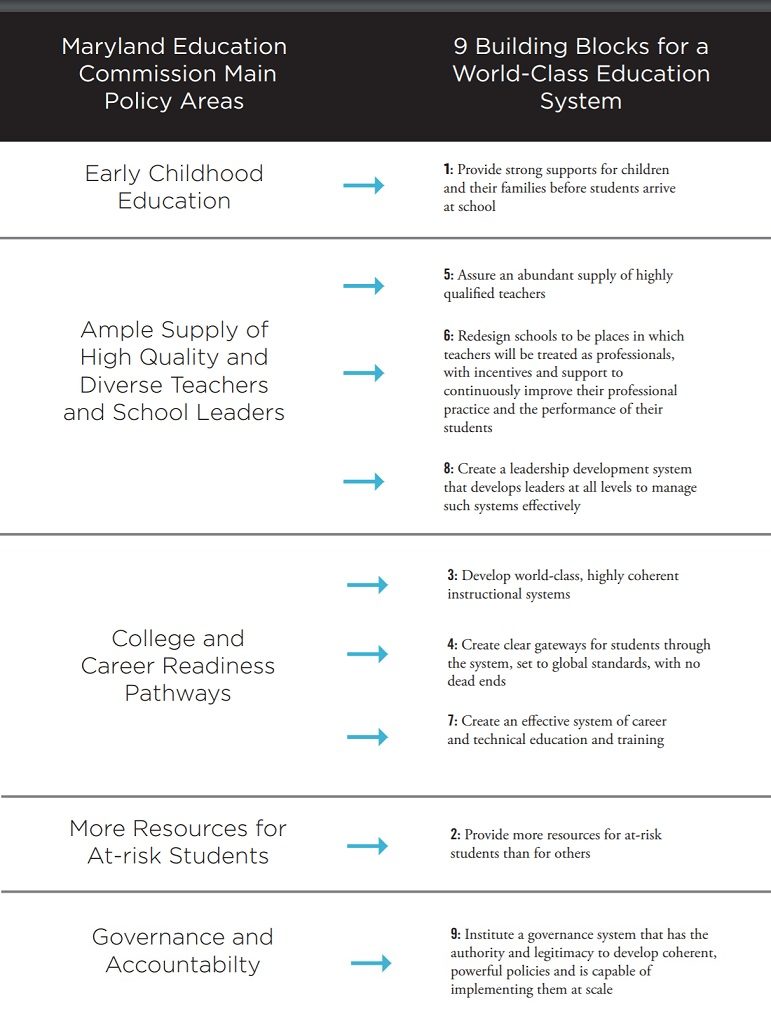