TAX CREDITS FOR SCHOOL DONATIONS: Gov. Larry Hogan on Wednesday said he plans to propose legislation that would grant tax credits for donating to schools and make it cheaper for some people with student loans to buy certain homes, Erin Cox reports in the Sun. Hogan’s office did not provide copies of the bills, which he said will be introduced today.

PUSHBACK ON PAID SICK LEAVE: Employers are already pushing back against the proposal requiring paid sick leave, commissioning a poll that shows Marylanders support the concept of paid sick leave, but withdraw their support when told of its negative consequences. Advocates for paid sick leave derided the poll, saying it was a “push poll,” pushing people toward opposition with consequences that don’t exist, writes Len Lazarick for MarylandReporter.com.

SCHOOL CONSTRUCTION FUNDS: Gov. Larry Hogan’s budget proposes to give $25 million to Anne Arundel County for school construction projects, but school system officials made their case Wednesday for another $30 million, reports Elisha Sauers for the Annapolis Capital. The request comes on the day Maryland’s 23 other school districts vied for the $314 million set aside in the state’s capital budget for school projects, about one-third of the total capital spending plan. 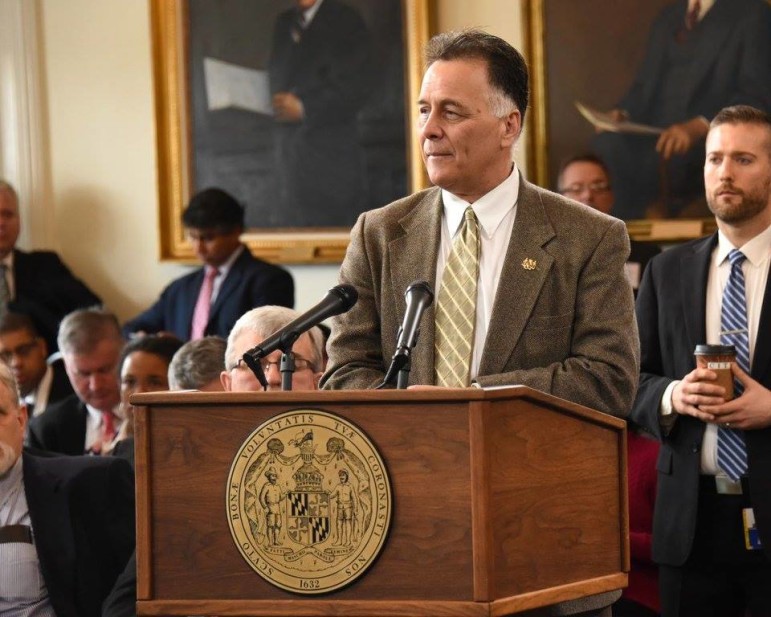 State Sen. Johnny Ray Sallings, at podium, and Del. Robin Grammer, right, both Dundalk Republicans, were among several Baltimore County officials testifying at the Board of Public Works Wednesday for air conditioning in county schools. Photo by Governor’s Office.

EARLY GRADUATION GIFT: Gov. Larry Hogan wants to reward public high school students who graduate early by giving them college scholarships, a move he said would make higher education more accessible even as it saves the state some money. But educators and Democratic legislative leaders questioned whether the program — which Hogan created by executive order Wednesday — is really in the best interest of all students, Ovetta Wiggins and Nick Anderson of the Post report.

KEEPING MORGAN INDEPENDENT: Although a public institution, Morgan State University in Baltimore isn’t a part of the University System of Maryland and has its own governing board. Daniel Leaderman of the Daily Record reports that lawmakers from the city want to make sure it stays that way, despite a proposal — arising from an ongoing civil suit — for the institution to absorb the University of Baltimore.

REMOVING SCARLET ‘P:’ The Maryland General Assembly must repeal the state’s lifetime ban on convicted perjurers from testifying in court because it enables violent criminals to prey with impunity on victims who were caught lying in the distant past, the Hogan administration and a Democratic senator told legislators Tuesday, Steve Lash writes in the Daily Record.

DIRECTORS’ IMMUNITY: Corporate-board directors who comply with the statutory obligations of good faith and related duties would be immune from liability in shareholder lawsuits following sales and acquisitions under pending legislation, Steve Lash of the Daily Record writes.

BPW HIRES OUTSIDE ATTORNEYS: The Board of Public Works approved a contract to hire a consortium of outside attorneys to represent the state against petroleum companies as Maryland seeks to recover costs for the testing and cleanup of a widely used gasoline additive that has contaminated well water, reports Bryan Sears in the Daily Record.

‘CLOSED SIDEWALK’ SIGNS WANTED: Some local state lawmakers want developers and construction crews that get permission to close sidewalks along state roads to post signs with contact information and the expected duration of the closures, Aaron Kraut of Bethesda Beat reports.

GOVERNOR SEEKS BILL SPONSORS: Aides to Gov. Larry Hogan said earlier this week that some of the governor’s proposed legislation would be introduced in the General Assembly on Wednesday. But that didn’t happen. Instead, Senate Minority Leader J.B. Jennings (R-Baltimore County) asked senators to contact Hogan’s legislative office if they were interested in sponsoring any of the governor’s bills, reports Ovetta Wiggins in the Post.

STATE AIDS TRAIL EXTENSION: The Cross Island Trail will be extended to Grasonville thanks to a state grant of more than $3 million. The grant was first mentioned back in October. In a letter to the Queen Anne’s County Commissioners earlier this month, Gov. Larry Hogan made it official, according to the Easton Star Democrat.

ASSISTED SUICIDE SHROUDED IN ARTIFICE: In an opinion piece for MarylandReporter.com, Greg Kline writes that proponents of physician assisted suicide often claim that they want an honest debate on this issue and insist that if people knew the true facts they would prevail. However, their entire movement is shrouded in euphemism and artifice.

WA CO COMMISSIONER APPOINTEE: The future of Woody Spong’s controversial appointment to the Washington County Board of Commissioners might gain some clarity on Monday night. C.J. Lovelace of the Hagerstown Herald Mail reports that Spong’s name is among dozens of appointees who appear on the Feb. 1 agenda of the Maryland Senate Executive Nominations Committee, which is scheduled to meet at 5 p.m. in Annapolis.

NOMINATING PANEL PROBE SOUGHT: The Anne Arundel County Democratic Central Committee wants the Office of the Attorney General to investigate the School Board Nominating Commission for allegedly failing to follow required procedures, Cindy Huang of the Annapolis Capital reports. David Nitkin, a spokesman for Attorney General Brian Frosh, said the office received the request but doesn’t have the power to investigate school board nominating commissions.

TRONE UNCORKS HOUSE RACE: Saying that he had been thinking about running for Congress since he was in his 20s, David Trone, the 60-year-old co-owner of Bethesda-based Total Wine & More, is jumping into the race for the Democratic nomination in the 8th Congressional District — and is planning to use his considerable wealth to self-fund his campaign, Louis Peck reports in Bethesda Beat.

MAYORAL CANDIDATE ISSUES PLAN: Baltimore City mayoral candidate Elizabeth Embry on Wednesday released a 17-page plan that outlines how she would work to reduce crime if elected. Luke Broadwater of the Sun reports that Embry, chief of the Maryland Attorney General’s Office criminal division, would use a “district-by-district strategy” to target gangs, revitalize the anti-gun CeaseFire program, and expand the Safe Streets program in which ex-offenders intervene in disputes.

HOPKINS BIRTHPLACE MAY BE RAZED: An Anne Arundel County developer wants to tear down Whites Hall, the Gambrills house where Johns Hopkins was born, reports Amanda Yeager for the Annapolis Capital. Millersville-based Polm Cos. requested a demolition permit for the property on Jan. 13. Hopkins, who helped start the hospital and the university named after him in Baltimore, was born in the two-story, red brick house in 1795.