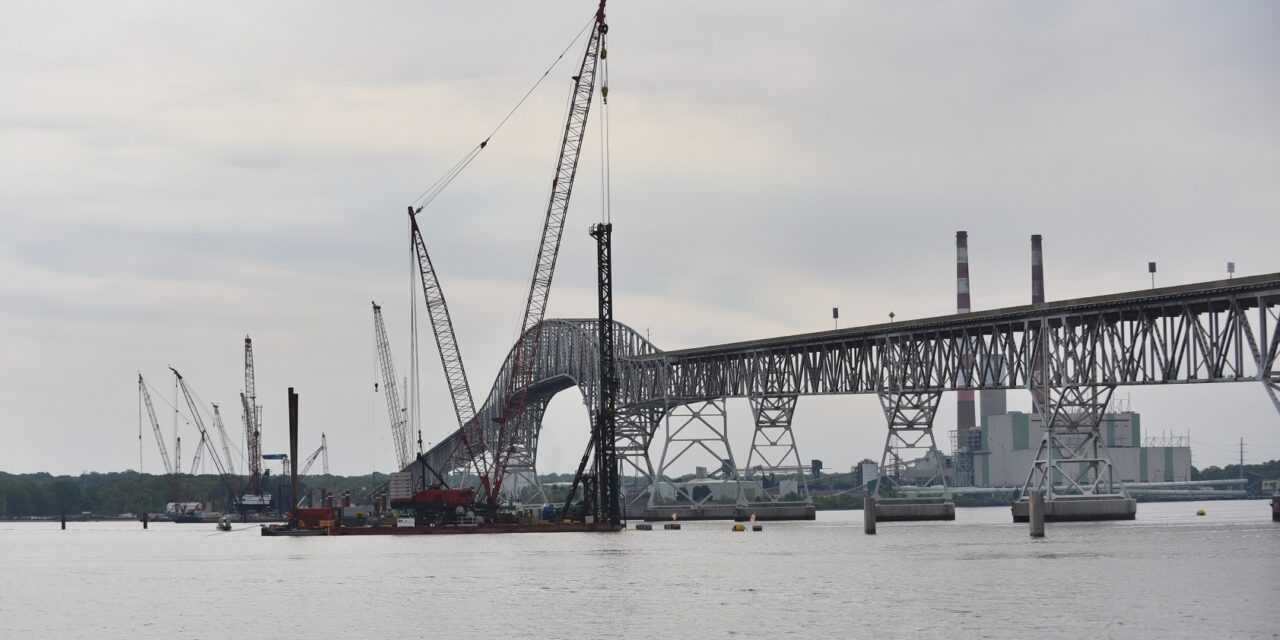 The replacement of the Nice Middleton bridge over the Potomac River from Charles County to Virginia is underway. Governor's Office photo

VP HARRIS IN B’MORE: On the Biden administration’s 100th day Thursday, Vice President Kamala Harris will visit Baltimore to tout COVID-19 vaccination and recovery efforts and pitch massive jobs and family aid packages that will be considered by a sharply divided Congress, Jeff Barker of the Sun reports.

BRAVEBOY ORGANIZES CHAT WITH BLACK WOMEN PROSECUTORS: Some are mothers. Some are daughters. Some are wives. They all represent a sisterhood of prosecutors nationwide. Prince George’s County State’s Attorney Aisha Braveboy organized a slightly more than two-hour virtual town hall on Facebook with about a dozen Black women prosecutors from across the country to discuss challenges in the elected position, William Ford reports for the Washington Informer.

CARROLL SCHOOL COVID CASES DROP 4%: Total COVID-19 cases in Carroll County Public Schools dropped by 4% this week, but the number of positive students remains unchanged, as high as it has been. Case numbers decreased from 98 to 94 within a week due to four fewer staff members having the virus, Kristen Griffith and Bob Blubaugh report for the Carroll County Times.

MO CO STUDENTS SAY SAFETY TASK FORCE DOESN’T GO FAR ENOUGH: A group of Montgomery County students is pushing back against a new task force aimed at “reimagining” school safety, saying it does not do enough to remove police from buildings and fails to prioritize students’ input, Caitlynn Peetz reports for Bethesda Beat.

PARTISAN POLITICS ENTERS WESTMINSTER MAYOR’s RACE: A Westminster mayoral candidate is receiving campaign help from the local and state Republican party committees. His opponent and some members of the public believe partisan groups should not be involved in nonpartisan races, Kristen Griffith of the Carroll County Times reports.

FREDERICK CITY PLANS DROP BOXES FOR ELECTIONS: Planning an election with a heavy focus on mail-in voting, Frederick will have at least five secure boxes for people to drop off their ballots, and possibly six, for its September primaries and November general election, Ryan Marshall reports for the Frederick News-Post.

SUN, TRIB SUED OVER CAPITAL GAZETTE RENT: The company that owns the building formerly occupied by the Capital Gazette newspaper group is suing The Baltimore Sun and Tribune Publishing for breach of rental contract, following the office’s closure during the coronavirus pandemic last summer, Hallie Miller of the Sun reports.