From the cover of the Volcker Alliance report

In public debates about the budgetary soundness of state government finances, it can be hard to separate real insights from political posturing and cloudy media reporting.

The legendary former Federal Reserve Chairman Paul Volcker founded the Volcker Alliance in 2013, reportedly with his own money, with the aim of enhancing government responsiveness by improving how governments work.

In view of its diverse board and the independent sources of its revenues, the alliance appears to be an honest broker that’s free from institutional bias and, as such, is an outstanding venue for studying budgetary integrity across the 50 states.

In its report, Truth and Integrity in State Budgeting: What is the Reality? the Volcker Alliance did just that, by establishing “best practices” and grading every state against them, for the three years ending in 2016.

The report paints a mixed picture for Maryland, and represents an opportunity for the state to make real improvements in areas considered as weaknesses. 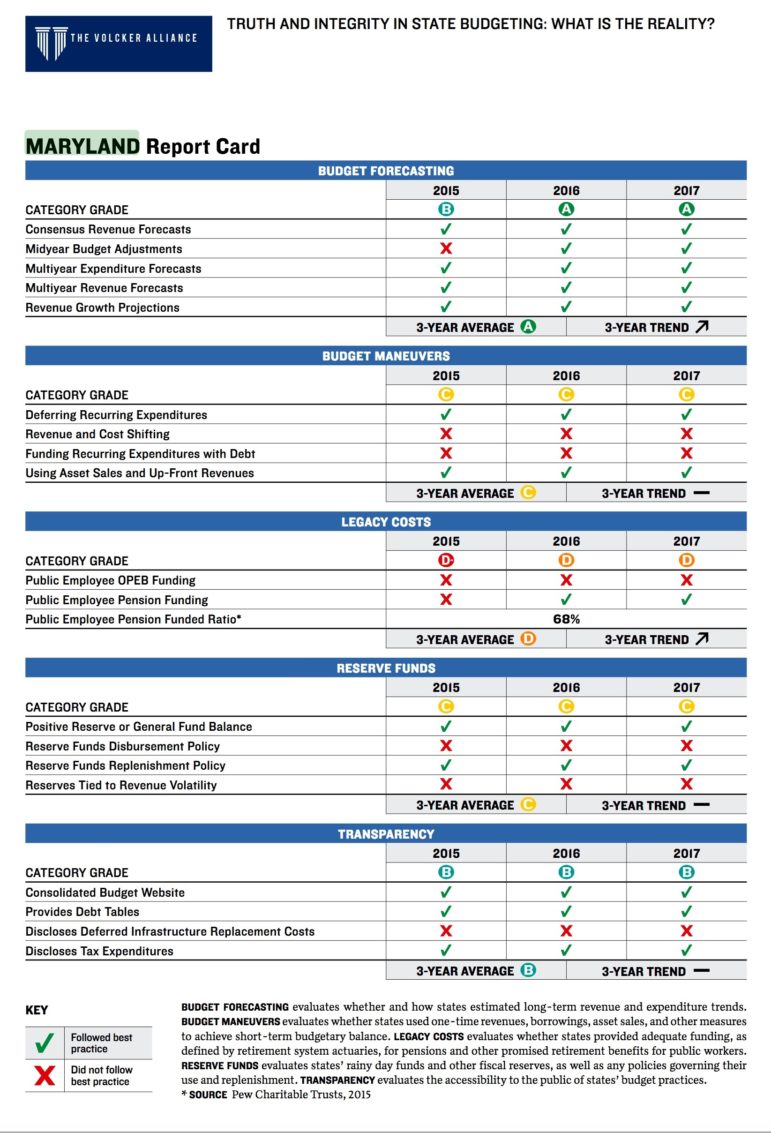 The alliance found that Maryland followed best practices for each of the five areas it studied, giving the state an “A” grade and it said the state demonstrated improvement in this category after fiscal year 2015.

Maryland uses a consensus-based and time-tested process to forecast budgetary revenues and expenses. It updates forecasts on a timely basis, and reacts responsibly to forecast “disappointments” by timely modifying spending plans, with consent of the Board of Public Works.

The Board of Revenue Estimates carefully forecasts cash collections three times per year, as it did just Wednesday, and reports extensive findings to the governor. Forecasts have been reasonably reliable, even though a minority of revenue components is volatile and difficult to predict.

The Spending Affordability Committee recommends to the governor and the General Assembly a level of spending for the state’s operating budget that is reflective of the current and prospective condition of the state’s economy. It will make its recommendations next week.

The Department of Legislative Services is a non-partisan arm of the legislature that analyses operating budgets and costs of proposed legislation and reports findings to the legislature.

The alliance believes states should pay for current-year obligations with current-year revenue; that a given year’s expenditures shouldn’t be moved to the following year to achieve balance; that the next year’s revenues not be moved back into the current year for the same purpose; and that money should not be shifted from special funds to the general fund to balance the operating budget.

The Alliance gave Maryland a “C” grade, while noting the state achieved no improvement during the three-year period of its study. The grade was because:

The Volcker report didn’t address why Maryland manipulates the numbers. However, reporting by local media offers anecdotal evidence about cloudy political disagreements over what’s causing “structural deficits,” their size, and which programs to cut or which taxes to raise:

Yes, Maryland wants to spend more than it can afford. And the primary culprit appears to be the “structural deficit,” a term that generally refers to:

While there are no studies in this area, Maryland’s BFRA lawmaking could be creating a disruptive public-policy effect because of funding becomes unpredictable and may cause these well-intentioned programs to lose their effectiveness.

gave Maryland a “D” grade mostly because the state has a record of underfunding retirees’ health costs. The alliance noted slight improvement over the three-year study period in the area of pension funding.

On June 30, 2016, state retiree health benefits in the Other Post Employment Benefit (OPEB) Trust Fund were 2.4% funded. The actuarial accrued liability for benefits was $12 billion, and the actuarial value of assets was $291 million; leaving an unfunded actuarial accrued liability of $11.8 billion. According to the 2016 audited financial report, the state didn’t appropriate funds to pay down future OPEB costs.

In recent years, Maryland has done a respectable job paying its pension obligations, and Volcker cites “slight improvement” in this category. However, Maryland’s pension trust fund continues to pay out more benefits than contributions collected; in 2016, retirees received $424 million more in benefits than the state and current employees paid into the system. And during the year the net pension liability increased (actuarially) by $2.8 billion. So the state’s pension-funding deficit will require decades of multi-billion dollar cash infusions and, perhaps more important, continuous 7.5% earnings from investments, to meet the plan’s obligations.

The Volcker Alliance says states should enact clear policies for deposits and withdrawals of “rainy day” monies, and they should align the size of their funds with the reality that tax receipts and revenue collections can be difficult to predict and can be volatile. Maryland received a “C” grade while showing no improvements during the three-year study period for two reasons:

Maryland’s State Reserve Fund (the official name for the rainy day fund) is expected to be $860 million at the end of the current fiscal year, which would be within the minimum limit prescribed by law. Maryland seems to run its Reserve Fund in a reasonable manner, according to state law. Known concerns with the fund are resolved annually.  And the state is proud of its fund management in view of its bond rating agencies’ sympathetic assessments of the fund’s scope and operation.

One perennial question that wasn’t covered in the Volcker Alliance report is: Where are the hard assets backing  up the reserve fund?

The fund isn’t identified with any liquid asset (such as cash) within the state’s audited financial statements. Further, the general fund balance sheet’s unrestricted equity is dwarfed by its current liabilities, suggesting there’s no cash earmarked or available for any reserve fund.

For these reasons, Maryland’s “rainy day” fund appears to be useful for budgeting, but may not be helpful when it would be most needed—when the state needs to pay its bills during periods where its cash flows become weak due to shortages of cash.

The Volcker Alliance says transparency is inadequate where it is difficult, or even impossible, for citizens to dig out the data they need to thoroughly understand a state’s budgeting practices, tax expenditures, infrastructure replacement, and debt service costs. The Alliance gave Maryland a “B” grade with no noticeable improvement over the three-year study period.

Volcker found Maryland’s overall transparency practices to be good, but it subtracted points because the data were in so many different places, and because the state doesn’t disclose deferred infrastructure replacement costs. Maryland’s deferred infrastructure costs are thought to be well into the hundreds of billions, but current accounting standards don’t require their disclosure.

State budget finances are a complex activity to understand and objectively assess, and every study of their efficacy is imperfect. The Volcker Alliance has produced a good study that Maryland should act on.