There is enough money in the state public campaign fund for one candidate and one election in the 2018 gubernatorial election, according to the state campaign finance director.

Sen. Rich Madaleno, D-Montgomery, who is running for governor recently claimed it.

“You can fully fund one candidate for either the general election or the primary, but not both,” said Maryland Candidacy and Campaign Finance Director Jared DeMarinis of the pending 2018 elections.

The current balance of the fund which is to be used for both the primary and general elections in 2018 is $2.9 million.

In 2014, as the gubernatorial election was getting underway, the balance for the fund was more thanr $5 million. Two candidates, Republican Larry Hogan and Democrat Heather Mizeur, ran for governor using public campaign financing. Hogan received $320,000 in public funds in the primary election and $2.6 million in the general election. Mizeur received $780,000 in the Democratic primary, which she lost.

Candidates that use public funding in the gubernatorial race receive a dollar-for-dollar match for the first $250 raised from individual contributions. Candidates can still raise money from PACs and special interest groups, but those donations are not counted toward matching funds.

The balance in the fund after the 2014 election was a little over $1 million, DeMarinis said.

Under state law, a candidate participating in the gubernatorial primary election that uses public campaign financing can receive up to $1.4 million in dollar-for-dollar matching funds in the 2018 election, after he or she qualifies. The candidate’s campaign can spend no more than $2.8 million.

If one candidate uses the maximum allowed amount of $1.4 million in the primary, only $1.4 million will remain available in the fund. By comparison, Lt. Gov. Anthony Brown spent $11 million in his 2014 gubernatorial primary election. Together, six Democratic candidates spent $21.5 million.

Last week, Madaleno announced he would use public campaign financing in his run for governor. He could face as many as eight Democrats in the June 26 primary election.

He cautioned fellow Democrats to weigh the benefits of using public funding in the primary given the bleak amount of funding available.

Hogan will have much more 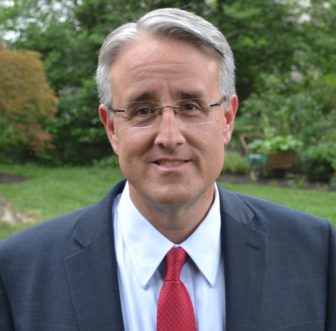 “Gov. Hogan is going to have so much to spend in the general election,” Madaleno said. “As Democrats, we owe it to our voters to make sure there’s some money left to run a strong campaign in the fall against Larry Hogan. I will demonstrate a prudent management style by running an effective and efficient campaign to win the nomination.”

“The Republican Party, including Larry Hogan, has already sold out to its billionaire backers,” Madaleno said in announcing his decision. “Democrats must set an example and give average voters an equal voice in the electoral process. I am honored to accept public financing for the Democratic nomination because I believe it is time that we stand together and say enough is enough.”

The state public campaign finance fund has been tapped out over recent years, but not always for the purposes for which it was intended.

Between 2011 and 2014, the state legislature approved the use of over $1 million for “electoral purposes,” DeMarinis said. The bulk of the money, $650,000, was used to modernize the state’s electronic campaign finance data system beginning in 2011. In 2012, a budget amendment was approved allocating the use of $250,000, again, for electoral purposes, DeMarinis said. And in 2014, another $131,000 was appropriated or spent.

Also around 2011, the legislature eliminated the fund’s key revenue source, a check-off box on state tax returns where people could voluntarily contribute to the fund.

Montgomery County is using its own version of public campaign financing for local office this election cycle, and dozens of candidates have applied.

“There’s more money in the Montgomery County fund than there is for the gubernatorial election,” DeMarinis said.

DeMarinis said before 2014, only one candidate used the public funding account to run for office, and that was in 1994, when Republican Del. Ellen Sauerbrey used the fund and came within 6,000 votes of beating Democrat Parris Glendening.

In 2015, after winning the election, Gov. Hogan proposed adding $1.8 million back into the fund, but the legislature cut it down to $1 million.

Through an administration bill, Hogan also added back the tax check-off box and incorporated an additional funding source for the fund, using fines and fees collected from ethics and campaign finance violations.

Today the fund balance is about $2.9 million, which DeMarinis said is unlikely to change.

Another advantage to using public financing for a state legislator like Madaleno is that he is no longer prevented from raising money during the 90-day state legislative session.

“I think that this was the only option available to Madaleno,” Eberly said. “Because he is a member of the Assembly, he cannot actively raise funds from January through April of the election year, but all of his opponents can. Even county execs Baker and Kamenetz can raise funds.

“So Madaleno had 3 choices 1) Raise no money from January through April, 2) Choose a running mate who would be eligible to capable of raising money during session (without involving Madaleno), or 3) Accept public funds, which also allows for raising private donations during the session (within limits).  Options 1 and 2 aren’t serious options.”

“If any of the other Democrats seeking the nomination tap into the campaign fund then there will be little to go around and very little for the general,” Eberly said. “Though I doubt any Democrat will seek public funds for the general. The eventual Democratic nominee will have no trouble raising money.”

The primary winner who advances to the general election that’s used public financing would receive a check for their maximum expenditure of $2.8 million.

“The general election [public funding] is a grant,” DeMarinis said. “When a candidate wins the primary and wants to participate in the general [election] using the program, we write a check for the [maximum] expenditure amount for $2.8 million.”

But it’s likely that full amount won’t be available in 2018.

Gov.Hogan has no announced primary challenger and has signaled that he won’t be using public financing.  In January, Hogan had $4.1 million in his campaign account, and has been aggressively raising money this year after the legislative session ended. Lt. Gov. Boyd Rutherford, running on Hogan’s ticket, had $491,000 in his account.

Primary candidates will have until Feb. 27, the filing deadline, to decide if they wish to use public campaign financing.