The wet woods bordering Marshyhope Creek on Maryland’s Eastern Shore exuded their usual lush green in mid-September, with only a trace of the colors that autumn would soon bring to the thick foliage. All seemed normal.

But catastrophe is on the way, in the form of a little green beetle from Asia that’s wiping out ash trees by the hundreds of millions across the United States. The voracious invaders, emerald ash borers, were spotted a couple of years ago just 20 miles away in Cambridge, so the ash trees lining this stretch of the Marshyhope are almost sure to become infested and die in the next several years.

When they do, they’ll leave behind a ghost forest of leafless branches, drastically altering the vast wooded marshlands bordering the Marshyhope and its receiving river, the Nanticoke. Habitat for fish and wildlife could be affected, as could water quality in one of the Chesapeake Bay’s healthiest tributaries.

“It’s a huge ecological problem,” said Michael Raupp, an entomologist with the University of Maryland College Park. Ash are the dominant trees along the Nanticoke and many other rivers, and many species associated with them are also at risk — about 40 different insects are intimately associated with ash trees. “It’s not just ash that goes down the toilet,” he concluded, “it’s many other species.”

The borers, which are native to eastern Russia, northern China, Japan and Korea, showed up in North America in 2002. They have since spread to 31 states. They popped up in Maryland and Virginia in 2003, and were briefly declared eradicated, only to reappear in a few years. They are now found in every Bay watershed state and the District of Columbia.

The adult beetles, bright green and purple and about a half-inch long, lay their eggs on the bark of ash trees in spring. When the eggs hatch, larvae bore into the bark and feed through summer into fall on the cambium, a thin layer of tissue between bark and wood that transports nutrients and water.

With that flow disrupted, the foliage begins to die back from the top down. The larvae overwinter in the trees and emerge in spring as adult beetles, flying off to find other trees.

Mortality in areas fully infested approaches 99%, experts say. In September, five of the six most prominent ash tree species in North America were declared “critically endangered” — one step short of extinct — by the International Union for Conservation of Nature, with the sixth species classified as endangered, two steps away.

Green ash, white ash and black ash are the nation’s most dominant ash species, with nearly 9 billion trees estimated in the lower 48 states. White ash is widely used for making furniture and baseball bats. They’re also one of the country’s most common landscaping trees, lining urban and suburban streets and populating many parks.

The borers are estimated to be causing more than $1 billion in losses nationwide, including costly dead tree removals and declines in property value.

Federal officials have declared quarantines around fresh borer sightings, seeking to ban exports of wood products from infested areas, but they haven’t slowed the insects’ spread.

With little prospect of halting the devastation, the fight against borers has shifted to include a long-term strategy, aimed at picking up the pieces afterward. That’s why one warm day in September, a six-member team set out in kayaks to try to rescue a handful of the Marshyhope’s ash trees from the expected onslaught.

“We’re not trying to go and save specifically a bunch of trees, but save a seed source,” explained Colleen Kenny, a forest health watershed planner with the Maryland Department of Natural Resources, who led the excursion. Once the borers sweep through and kill off the rest of the ash, Kenny said, it’s hoped that the treated survivors will produce the seeds that can eventually regrow the lost forest — assuming their nemesis has moved on or is under control by then.

“They’re important to protecting water quality,” she explained. “In a lot of cases, they help filter out pollutants and sediment. We don’t want to lose the filtering power of those trees.”

The flotilla paddled into a narrow channel and stopped at a tract owned by The Nature Conservancy, which has permanently protected large holdings of woods and wetlands along the Marshyhope and Nanticoke.

The team, a mix of DNR and conservancy staff, then slogged through briars, mud and water up to their knees, lugging buckets and bags of gear to reach a suitable looking cluster of ash trees.

Perched on hummocks in the marsh, they picked out five green ash that appeared healthy, then measured and tagged them and logged their locations. Though their trunks were generally 7–9 inches in diameter, a core taken from one indicated the stand could easily be 70 or more years old. Although the area was open farmland a century ago, according to Elizabeth Zucker with the conservancy, the trees that sprang up there may have grown slowly as wet conditions reclaimed the site and the density of the woods increased. 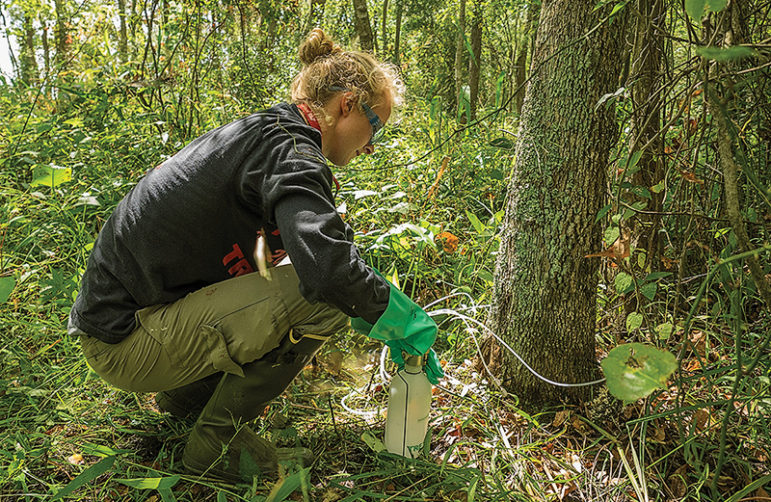 Colleen Kenny of the Maryland Department of Natural Resources infuses insecticide into an ash tree along Marshyhope Creek. (Dave Harp)

The team proceeded to give each tree an “intravenous injection” with an insecticide that’s been proven to ward off the beetle and its wood-eating larvae. The bluish liquid, carefully measured out in a dosage matched to the tree’s size, oozed through clear plastic tubing into the tree trunk via needles that had been inserted into small holes drilled through the bark.

“This is probably more attention than this tree has seen in all its years,” said David Ray, a conservation forester for the conservancy, as he worked on one tree.

The pesticide, emamectin benzoate, came from a Massachusetts company that markets it under the trade name TREE-age. Triage is how it’s being used. A one-liter bottle of the chemical formulation costs $500, Kenny said, which can only treat about 10 really large trees. And the treatment is only effective for two or three years before it needs to be repeated.

“In natural areas, it’s just too expensive,” Kenny said. “It’s not practical to treat or save every tree.”

Kenny said the DNR has performed similar treatment on a couple hundred ash trees in state parks, including Martinak bordering the Choptank River and Tuckahoe bordering the creek of that name in Caroline County.

“There are going to be massive losses on unprotected trees, in riparian zones and in neighborhoods,” he said. “Once that tsunami rolls over and the beetle populations collapse — as they do, after six or eight years — the guys (trees) that make it are going to be able to continue” the ash line.

In addition to the chemical treatments, federal and state agencies are trying to develop biological controls against the borers’ devastation. Hordes of parasitic wasps that feed on borer eggs and larvae have been released at 20–25 sites across Maryland, according to Heather Disque, ash borer coordinator for the state Department of Agriculture. Last year, she said, the state distributed 70,000 wasps to five state parks and Cylburn Arboretum in Baltimore.

But biological control is pricey, too. The tiny wasps, bred at a U.S. Department of Agriculture laboratory in Michigan, cost $4 to $6 apiece to produce, Disque said. The nonnative insects have to undergo extensive testing before being approved for release to ensure they target only emerald ash borers and not other, beneficial bugs.

The aerial campaign isn’t a panacea, which is why on-the-ground efforts like those along the Marshyhope are a critical part of the battle. Wasps released in Maryland to date aren’t able to save the larger ash trees, Disque said, because the bark is too tough for them to penetrate and lay their eggs among the borer larvae. So, officials are looking to see if the insects can shield smaller, younger ash from enough borers that they can survive.

Steele: Trump unlikely to run in 2024, doomed if he does