HOGAN SHUNS STATE SCHOOL PLAN: Gov. Larry Hogan is refusing to endorse the Maryland school board’s plan for helping low-performing schools, saying state board members were hamstrung by a new law limiting what the plan can include, Liz Bowie and Pamela Wood of the Sun report. The General Assembly passed legislation this year that limits ways the state can try to reform its lowest-performing schools — those in the bottom 5%. The Republican governor vetoed that bill, but the Democratic-controlled legislature overrode him

McAULIFFE REACTS TO HOGAN METRO PLAN: Virginia Gov. Terry McAuliffe said Thursday that Maryland Gov. Larry Hogan’s proposal for funding Metro falls short of a long-term fix for the transit agency’s financial difficulties, but he left open the possibility that the plan could serve as the basis for an interim solution, Robert McCartney of the Post reports. In a letter to Hogan, McAuliffe joined D.C. Mayor Muriel E. Bowser in faulting the plan because it does not provide for a new tax or other permanent, dedicated revenue source for Metro.

UM ENVIRO CENTER CHANGES CHIEFS: When Donald Boesch came to Maryland 27 years ago, the Chesapeake Bay restoration effort was struggling to make real progress. The research institution he’d come to lead faced challenges, too, just to survive intact, writes the Bay Journal’s Tim Wheeler. Now, as Boesch prepares to step down this month as president of the University of Maryland Center for Environmental Science, the Bay’s health appears to be improving, though it’s far from saved. And his institution has not only survived, but generated a growing body of research that’s helped guide the recovery.

DELEGATE PUSHES CITY CENTER REVITALIZATION: Efforts to create a new financing tool for development in older city centers have gained a little momentum in the Maryland General Assembly over the past three years — but what they haven’t gained is passage. But Del. Brett Wilson, R-Washington, said this week that he and city officials haven’t given up hope. Whether there will be a bill in the 2018 General Assembly session, which begins Jan. 10, hasn’t been decided, Tamela Baker reports in the Hagerstown Herald Mail.

SZELIGA DEMANDS ACTION IN CITY SCHOOLS: Republican state Del. Kathy Szeliga, of Baltimore and Harford counties, is a former teacher. She says what Project Baltimore has reported about what’s allegedly happening inside city classrooms, should not be allowed to happen. She is demanding action after watching a series of recent Project Baltimore reports on alleged grade changing and standards inside one Baltimore City School, Chris Papst of WBFF-TV reports.

PIPELINE PROTEST IN HAGERSTOWN: The protest over a proposed natural-gas pipeline continued Thursday night in downtown Hagerstown, reports Katiann Marshall for the Hagerstown Herald Mail. About 50 people gathered at John Wesley United Methodist Church on North Potomac Street for an informational session regarding the pipeline and the potential dangers it could cause to the surrounding community. TransCanada is proposing to build a 3.5-mile natural-gas pipeline to run through Hancock and 100 feet under the Potomac River.

BUSCH, SISTER SPEAK ABOUT TRANSPLANT: Three and a half months after the liver transplant, House Speaker Michael Busch and the sister who donated part of her liver to him spoke publicly for the first time Thursday about the surgery that saved his life and renewed the bond between them, Erin Cox of the Sun reports.

EMILY’s LIST TARGETS HOGAN: Emily’s List, a political action committee that pushes to elect Democratic female candidates who support abortion rights, says it is putting Gov. Larry Hogan (R) “on notice” for 2018, Ovetta Wiggins is writing in the Post. The political group says it will back a candidate to run against Hogan next year, and raise money for that campaign, because Hogan vetoed a bill that required companies with 15 or more employees to provide paid sick leave and because he appointed Robert E. Moffit, a critic of President Barack Obama’s Affordable Care Act, as chairman of the state’s health-care commission. 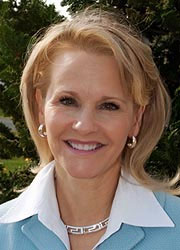 AFZALI FOR EXECUTIVE: Kathy Afzali made it official Thursday night in a politico-studded campaign kickoff announcement: She’s running for county executive in 2018. Danielle Gaines of the Frederick News-Post reports she was supported at a downtown Frederick soiree by Maryland House Minority Whip Kathy Szeliga and Anne Arundel County Executive Steve Schuh. Sen. Michael Hough and other Annapolis colleagues were among the crowd. Here’s Afzali’s press release.

DeLAUTER PUSHES ON SANCTUARY COUNTIES: Frederick County Councilman Kirby Delauter continued to press this week for details on his colleagues’ feelings on sanctuary county policies. Delauter has been raising money for the 2018 county executive race on a promise that he would not support so-called “sanctuary county” policies that limit local government cooperation in enforcing federal immigration law, Danielle Gaines of the Frederick News-Post writes.

GAUGE REVOLUTION FROM A MAYOR’s RACE: A synagogue auditorium, where the temperature was alternately too hot or too cold, hardly seemed like the place to gauge whether a mini-revolution is about to strike at the Maryland Democratic establishment, Josh Kurtz of Maryland Matters writes. Neither was the sight of four white guys in suits running for Annapolis mayor – two of them highly tanned from door-knocking all summer. While the rhetoric was far more temperate than the room itself, it belied the fact that the Annapolis mayoral election may be the most important in Maryland this year, ahead of the big 2018 campaigns.

LEGGETT ASKS TO SLOW BASE WAGE HIKE: Montgomery County Executive Ike Leggett on Wednesday asked the County Council to amend a proposed bill to raise the county’s minimum wage to $15 per hour to impose a later effective date and change the definition of smaller employers, Andrew Metcalf of Bethesda Beat writes.