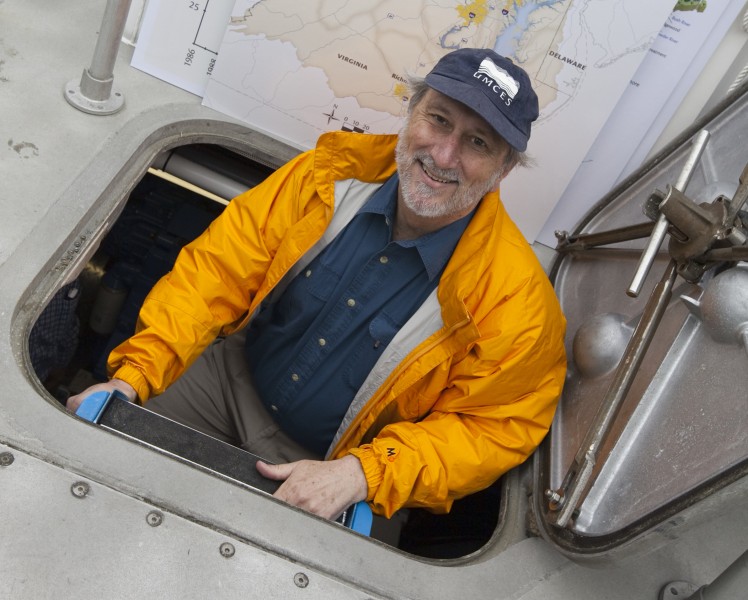 UMCES President Donald Boesch in a hatch aboard the Rachel Carson, the 81-foot research vessel built during his tenure. Photo by Cheryl Nemazie/UMCES)

When Donald Boesch came to Maryland 27 years ago, the Chesapeake Bay restoration effort was struggling to make real progress. The research institution he’d come to lead faced challenges, too, just to survive intact.

Now, as Boesch prepares to step down this month as president of the University of Maryland Center for Environmental Science, the Bay’s health appears to be improving, though it’s far from saved. And his institution has not only survived, but generated a growing body of research that’s helped guide the recovery.

Those who’ve worked with Boesch through that time credit his leadership on both scores. They say he’s played a critical role in advocating for science-based solutions to coastal degradation in the Bay, in his native Gulf of Mexico and worldwide. And, he’s overseen a threefold increase in research grants, fending off potentially crippling budget cuts he faced in his first year, and ultimately winning funding for new facilities at the labs — and even a new research vessel, the Rachel Carson.

Telling the truth and helping governors be successful

Boesch deflects such praise to the researchers he’s helped recruit to the center’s four laboratories — up from three when he arrived. But he acknowledges that he’s been willing — more so than most scientists — to apply research to the messy business of setting government policy. It came with the job, he points out; the center’s president traditionally sits on the Maryland governor’s “Bay Cabinet,” the rare academic amid a coterie of political appointees.

“I’ve been at the table, and once I got my sea legs, a very loyal and active participant,” he said in an interview reflecting on his tenure. “My job is twofold: to tell the truth as I know it…and help the governor be successful.”

In that role, Boesch has advised five governors, both Democrats and Republicans. He helped to build the case for the state’s first regulation of farmers’ use of fertilizer and, later, phosphorus-laden poultry manure. He’s also pushed for restoration of the Bay’s depleted oyster population by carving out harvest-free sanctuaries and undertaking large-scale reef reconstruction. In the last decade especially, he’s been an outspoken advocate for addressing the threat of climate change, both to the Bay and world.

Those have been contentious issues, but Boesch has not shied from controversy. Without rancor, he sought to bring science to bear on and bring together disputing stakeholders — and sometimes even feuding scientists.

“Don was very good at handling those whitewater situations, all the rapids, and maintaining his integrity as a scientist, (while) also wanting to help policy makers move forward,” said John Griffin, former secretary of natural resources who served three governors during Boesch’s tenure.

Boesch came to Maryland from his native Louisiana, where he was born in a working-class neighborhood of New Orleans’ Ninth Ward. He majored in biology at Tulane University and went on to become the first executive director of the Louisiana Universities Marine Consortium, which he helped to build into a formidable research institution. But he got a taste of the Chesapeake along the way, when he earned his doctorate in oceanography at the Virginia Institute of Marine Science.

“That was a shaping experience,” he recalled during the June dinner. “From day one, I worked right in the environment I studied. I was either in the Bay or right on the shore looking at it every day. It was that experience that led to my whole career working in marine labs.”

Return at a critical time

He came back in 1990 at a critical time. The Chesapeake restoration effort had been under way for seven years when Boesch moved into the president’s office at the Horn Point Laboratory, a former DuPont waterfront estate near Cambridge.

Just a few years before, state and federal leaders had identified nutrient pollution as the Bay’s biggest threat, and had pledged to reduce it by 40% by the year 2000. They didn’t realize how hard that was going to be.

“The folly was to think you could do this through voluntary measures,” Boesch said. While on paper, at least, it looked like states were taking steps to curb pollution, Boesch said he found himself trying “to convince people we weren’t getting anywhere very fast.” Readings from water quality monitors around the Bay didn’t match the improvements projected by the computer models used by the federal-state Bay Program to direct the restoration effort.

“I think one of Don’s biggest impacts,” said Dave Nemazie, Boesch’s longtime assistant, “is in a sense holding both the Bay Program accountable as well as the state accountable in how they used the assessments that were done, and making sure that no one was gaming the story too much.”

He has influenced some of Maryland’s most fraught environmental issues. Twenty years ago, in the wake of a rash of harmful algal blooms that killed thousands of fish and triggered health complaints in fishermen, Boesch chaired an expert panel tasked with determining if there was any linkage between the outbreaks of Pfiesteria piscicida — dubbed the “cell from hell” at the time — and nutrient pollution.

Many were saying the outbreaks were fueled by the widespread use of poultry manure as fertilizer on the Eastern Shore, an assertion hotly denied by farmers and poultry industry. And scientists even differed on whether pfiesteria or another aquatic microorganism was killing fish.

The Cambridge Consensus, as the panel’s report was called, concluded that a link between the fish kills and nutrient pollution was probable, if not provable. Nutrient enrichment of water is often associated with harmful algae blooms, it noted, so reducing the flow of nitrogen and phosphorus from farms into the Bay would likely lower the risk of more toxic outbreaks.

The report provided the scientific basis for Gov. Parris Glendening to push through legislation requiring Maryland farmers for the first time to limit and report their use of nutrient-rich manure and chemical fertilizer on crops.

More than a decade later, Boesch got pulled into a similar dispute. Despite the earlier nutrient management law, there was growing evidence that phosphorus from poultry manure was building up on many farm fields on the Eastern Shore and getting into the water. Farmers scoffed, and scientists in the University System of Maryland couldn’t even agree on how widespread or serious the problem was, or what exactly to do about it.

It wasn’t easy, but eventually Boesch crafted a statement the disagreeing researchers could agree on. Their report to Gov. Martin O’Malley contributed to his decision to draw up new limits on the land application of phosphorus.

The proposed regulation got withdrawn by O’Malley’s successor, Gov. Larry Hogan, who had pledged to protect Maryland’s poultry industry from overregulation. Soon thereafter, though, Hogan proposed much of the same regulation, though with enough wiggle in it to win over the industry opposition.

Sometimes, Boesch played the opposite role, of trying to dissuade politicians from a hasty, ill-advised move. Fourteen years ago, with oyster diseases devastating the Bay’s once-robust seafood industry, watermen were clamoring to try disease-resistant Asian oysters. Maryland’s Gov. Robert Ehrlich Jr., who aligned himself with watermen, endorsed the plan and said he would seek a permit from the U.S. Army Corps of Engineers to begin placing the Asian shellfish in the Bay.

“It was moving like a juggernaut,” Boesch recalled. Worried, as were many scientists, about the potential harm that could result from introducing nonnative species, Boesch said he played a behind the scenes role in getting the National Academy of Science to study the issue.

“I knew it would take a while, and I knew the probable outcome,” Boesch said. The report called for more research. The Army Corps then took five more years to complete a detailed study of the potential environmental impacts. By that time, Ehrlich had lost re-election to O’Malley, who opposed the introduction.

Boesch has been involved in the ensuing effort to rebuild the Bay’s native oyster population. This has been hotly debated as well. Some of his own scientists contend the only way to bring the bivalves back is to stop harvesting them. With Boesch’s advice and support, O’Malley opted instead to expand the state’s sanctuaries and undertake large-scale restoration efforts, building large new reefs and seeding them with billions of baby oysters spawned at the UMCES laboratory that was built while Boesch was its president.

Many watermen have bitterly opposed the move, calling the restoration effort a costly boondoggle. It’s still early, but monitoring so far shows the oysters are growing and thriving on the rebuilt sanctuary reefs. The Hogan administration made a move this year to open some sanctuaries to harvest, but the legislature blocked it.

As an eminent biological oceanographer with dozens of published studies to his name, Boesch has been called on for his expertise and advice on coastal and marine issues nationally and even internationally. He’s served on numerous government boards, commissions and advisory bodies, including the National Academy of Science. President Obama tapped him for his national commission to review the BP Deepwater Horizon oil spill and recommend measures to make offshore drilling safer.

“His passion has propelled him to speak truth to power, promote change and empower others to seek that change,” Pinsky said.

At the dinner, Boesch reflected on how his upbringing and his family had influenced him and enabled him to persist. Mentioning his two granddaughters, he said, “Every day I think about them. It motivates me to do what I do to ensure they have a livable planet.”

Soon, though, he’ll be doing it as just another member of the UMCES faculty. On Sept. 18, he’ll make way for his successor, Peter Goodwin, a civil engineering professor from the University of Idaho with a track record of research and work on issues involving rivers, lakes, estuaries and wetlands.

Boesch acknowledges that several key issues on which he’s labored long remain unresolved. Oyster restoration is still up in the air — as is the future of federal involvement in the overall Bay cleanup effort, given events in Washington, D.C. And the Trump administration is moving to halt any U.S. action on climate change, including withdrawing from the 2015 Paris accord.

“There’s never a stopping point that’s convenient,” he said. He does plan to spend the next year on the UMCES faculty and is looking to write a book or two. His first won’t be about the Bay, he said, but about the Gulf’s dead zone, plunging into the intersection of science and policy once again with characteristic directness — “how we came to learn what was wrong,” he said, yet haven’t done anything meaningful about it so far.

Boesch said he believes the Bay community has something going for it that gives him hope.

“One of the things that distinguishes this area is this agreement on what our goals are,” he said. “We may differ on how we get there, but agree on common goals.”