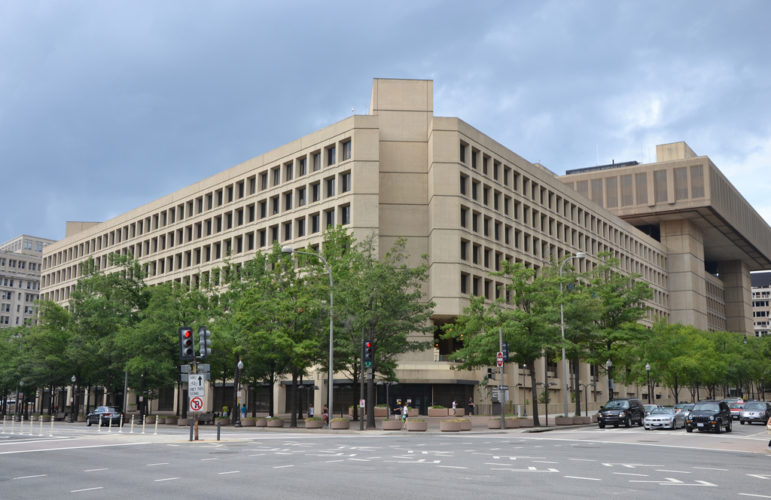 FBI headquarters on Pennsylvania Ave. in the District. Photo by SammySix with Flickr Creative Commons License

FEDS SPIKE NEW FBI HQ: The federal government is canceling the search for a new FBI headquarters, according to officials familiar with the decision, putting a more than decade-long effort by the bureau to move out of the crumbling J. Edgar Hoover Building back at square one, reports Jonathan O’Connell in the Post. In June, House appropriators rescinded $200 million from the project, drawing exasperation from local officials who have been pushing for the government to decide among three final locations: Greenbelt and Land­over, in Maryland  and Springfield, Va.

GOP LAWMAKERS TO FROSH: COOL THE SUITS: Attorney General Brian Frosh, a Democrat, has sued the federal government over the Trump administration’s travel ban as well as foreign payments made to Trump businesses, arguing they violate the Emoluments Clause of the U.S. Constitution, John Kelvey of the Carroll County Times reports. On Monday,   Del. Haven Shoemaker, and 35 of his House and Senate colleagues — all Republicans — asked Frosh to dial it back. In a letter addressed to Frosh, Shoemaker and his colleagues questioned the legal merits of the lawsuits and asked Frosh to consider deferring to  Gov. Larry Hogan before taking further legal action.

FUNDS TARGET OPIOID CRISIS: The Open Society Institute-Baltimore gave the Baltimore City Health Department $200,000 to help fight the opioid crisis, capping a stretch of increased funding for the opioid crisis across the city and state. Tim Curtis of the Daily Record also reports that Monday’s grant followed an announcement Friday that the city would receive more than $3 million from the state to fight the crisis, including $2 million to create an opioid crisis center. The state also announced $830,000 to fund a local Opioid Intervention Team and $750,000 to buy 20,000 doses of the overdose reversal drug naloxone.

PANEL SAYS DELAY VOTER DATA SUBMISSION: Spencer S. Hsu of the Post reports that President Trump’s voting commission on Monday asked states and the District to hold off submitting the sweeping voter data the panel had requested until a federal judge in Washington decides whether the White House has done enough to protect Americans’ privacy.

A MURKY SITUATION: The editorial board of the Sun writes that the situation regarding two members of Gov. Larry Hogan’s cabinet is murky, indeed, with members of the executive and legislative branches of government accusing each other of violating the Maryland Constitution and the theoretical possibility that some poor bureaucrat in the comptroller’s office could face legal consequences for processing a couple of paychecks.

PUGH, HOGAN MEET ON HOMICIDES: As her city deals with a record-setting homicide rate, Baltimore Mayor Catherine Pugh on Monday held a strategy session with Maryland’s governor on how to address violence. Pugh told reporters she presented Gov. Larry Hogan with an array of ideas, including increasing collaboration between state probation officers and city police to ensure violent parole violators are sent back to jail, Erin Cox and Kevin Rector of the Sun report.

2nd POTOMAC BRIDGE? A second Potomac River bridge connecting Montgomery County and Northern Virginia — an idea that has been studied and debated since the 1950s — is again drawing both interest and criticism, as elected officials and transportation planners search for ways to ease the region’s notoriously heavy traffic, Bill Turque of the Post is reporting.

HOGAN PATIENT ON NEXT RUN: Andrew Metcalf of Bethesda Beat writes that Gov. Larry Hogan said he’s taking his time before launching into his re-election campaign. After he toured a nonprofit in Silver Spring on Monday, Hogan noted the November 2018 election is more than a year-and-a-half away and he has “plenty of time to look at that.”

CROWDED HO CO COUNCIL RACES: Campaigns are now under way for every County Council district in Howard County, with a total of 14 candidates having declared their intentions to run for seats as of Monday. Four of the five current council seats will be vacated next year, as council members Calvin Ball, Mary Kay Sigaty, Greg Fox and Jen Terrasa have all reached their three-term limit. Only Councilman Jon Weinstein is still eligible for re-election, and he has filed to run, Kate McGill of the Howard County Times writes.

MoCo COMPETITION: One theory making the rounds in MoCo’s political world is that the passage of term limits for county officials is responsible for creating the high level of candidate competition we are now witnessing.  An opposing point of view is that this competition would have happened anyway due to other factors, such as County Executive Ike Leggett’s retirement and the availability of public campaign financing.  Who’s right and who’s wrong? Adam Pagnucco tries to answer the question in the Seventh State blog.

RANKING THE SENATORS: Maryland’s Democratic Sens. Ben Cardin are in the middle of the pack when it comes to their approval ratings in their homes states, with the two scoring 53% and 51% in ranking by Morning Consult, with a surprising quarter of those polled saying they don’t know or had no opinion. The most popular senator in his home state is Vermont’s Bernie Sanders and the least popular of all the U.S. senators is Senate Majority Leader Mitch McConnell of Kentucky.

RACIAL TENSION IN ANNE ARUNDEL — OR NOT: Racial tensions are simmering in Anne Arundel County. Or at least, that’s what some political activists want you to believe, writes conservative columnist Michael Collins for MarylandReporter.com.

HARASSMENT PROBE: Four months after a Washington County employee filed a complaint alleging sexual harassment against a Washington County commissioner and a hostile workplace, the investigation is still ongoing, with at least some interviews unfinished and others unscheduled, Julie Greene of the Hagerstown Herald Mail reports.