Located on I-68 in Washington County, the Sideling Hill Visitor Center sits just to the east of a giant rock cut that some consider a gateway to Western Maryland. (Corrected 6/29/17 at 12:21 to reflect the location in Washington County near the border with Allegany County)

As Maryland’s rural counties lose farmland, consider fracking and face economic challenges, the Capital News Service at the University of Maryland Philip Merrill College of Journalism presents a series examining the political divide between urban and rural parts of Maryland and the state of the economy in rural Maryland. This is the first part in a five-part series.

In 2009, former Maryland Gov. Martin O’Malley closed the visitor center at the Sideling Hill cut, the symbolic gateway to Western Maryland, as a cost-saving effort.

Some saw the move as personal, or at least confirmation of how the former governor felt about the state’s rural counties.

“We had only two visitor centers that were closed in the entire state under O’Malley,” said William Valentine, an Allegany County commissioner. “It wasn’t too hard to figure out what happened.”

Earlier this year when Hogan took the stage in Annapolis at P.A.C.E., a conference dedicated to Western Maryland, he opened with the following: “When I was sworn in two years ago, I said the war on rural Maryland was over — and I meant what I said.”

Hogan’s surprise election in 2014 happened in part because of an unexpected surge of rural voters that repeated for Donald Trump two years later. And while Hogan has paid more attention to rural Marylanders than his predecessor, some politicians in rural areas say he has struggled to deliver what they want most — more money for infrastructure and less regulation from Annapolis. 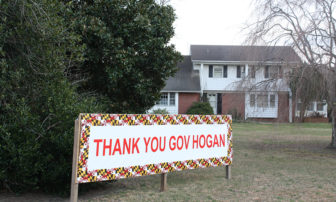 A home on Rt. 50 in Talbot County in Maryland shows support for Gov. Larry Hogan, who has made a priority of visiting rural areas during his first term. Photo by J.F. Meils/Capital News Service via AP.

Mostly urban and suburban Democrats hold 70 percent of the seats in the Maryland Senate and 64 percent in the House of Delegates, enough to override a veto. This is because the vast majority of the state’s population is clustered near Washington, D.C., and Baltimore, and tend to vote Democratic.

“For eight years (under O’Malley), people in rural Maryland felt disenfranchised, felt that Annapolis was out of step with them,” said Chris Shank, Hogan’s chief legislative officer. “And some in rural Maryland were falling more and more behind.”

How much of that should be blamed on urban and suburban legislators is debatable.

“Everyone from all the different regions of the state can make a case for why they are getting the short end of any deal out of Annapolis,” said Sen. Richard Madaleno, D-Montgomery, who is openly considering a run against Hogan in 2018. “The grass is always greener in someone else’s yard.”

Hogan’s victory in Maryland is often attributed to a low turnout in an off-year election combined with a boomlet in the rural vote and a big number from Anne Arundel, his home county.

But that’s not quite what the numbers belie. Statewide turnout in 2014 was only about 2,000 votes fewer than in 2010. And Hogan got only 9,000 votes more in Anne Arundel than former Republican Gov. Robert Ehrlich, who lost to O’Malley in 2010.

However, Hogan did run up the count in rural Maryland.

Compared to Ehrlich’s losing effort in 2010, Hogan did 17% better in Western Maryland (Garrett, Allegany and Washington counties) and 14% better in the northern suburbs and exurbs of Frederick, Harford, Carroll and Baltimore counties. The mid-to-lower Eastern Shore counties came out for Hogan by 5% more than Ehrlich. But Southern Maryland came out strongest for Hogan, particularly in Calvert and St. Mary’s, which went for him by 31% more than they did for the Ehrlich in 2010.

Put together, those counties delivered 63,000 more votes to Hogan than they did to Ehrlich. Hogan beat Brown by 65,510 votes.

Hogan ran on a platform of cutting taxes and reducing both spending and regulation.

He has arguably struggled to deliver on those promises. But he has come through for rural areas in other ways, including $14 million for downtown revitalization efforts in Hagerstown, Cumberland and Salisbury.

While the governor can point to this and other small victories as proof of his promise to “end the war on rural Maryland,” state and local politicians from rural counties universally say they need more.

There is also simple majority politics to consider and, some say, gamesmanship around rural issues.

“It’s in some of my colleague’s political self-interest to make out their constituency as the victim,” Madaleno said.

To be a rural politician 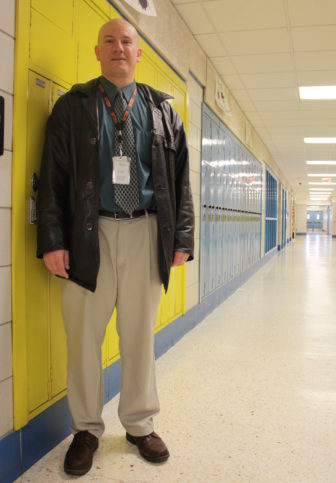 Paul Edwards, a Garrett County commissioner, in the hallway at Northern High School in Accident, Maryland, where he works as the director of secondary education for the county. (Photo by J.F. Meils/Capital News Service via AP)

Representing rural areas in Maryland tends to mean climbing one of two uphill paths: attempting to win concessions in Annapolis or managing counties, cities and towns without much help from it.

“We’re out here withering on the vine,” said County Commissioner Paul Edwards, R-Garrett County, who is the son of Sen. George Edwards, R-Garrett, Allegany, Washington. “We asked for $1.3 million from the legislature to help keep our schools open, but we’re not gonna get it because the bigger counties are going to think that any money coming to us is going to be taken from them.”

Often it’s not about winning or losing financially for rural representatives, it’s just getting a seat at the table.

“I think (Hogan’s) been as sensitive to rural counties as he can in light of the fact he doesn’t have a lot of money,” said County Councilman Bud Otis, R-Frederick.

Almost universally in rural areas, local politicians say the Hogan administration has made a priority of being responsive. When asked what the governor has specifically done for them, simply listening is almost always the first thing mentioned.

“The big thing he’s been open to is changing the atmosphere that the state wasn’t as business friendly as it could be,” said County Executive Barry Glassman, R-Harford. “Just the customer service in some of the state departments to work with the local politicians has helped.”

But that doesn’t mean Hogan has the means — read: money — to get big things done for rural Maryland.

“I learned real quick when I first got here (in Annapolis) — I know how to count,” said Sen. Edwards. “Sometimes you have to compromise to get things done. A lot of times you have to play defense.”

The legislative rub tends to come down to the key difference between urban and rural areas: restraining growth versus encouraging it.

“So many people in Annapolis have this vision that one size fits all. It does not,” said County Councilman Ricky Travers, D-Dorchester. “The impacts of some of these bills are absolutely horrendous on rural Maryland.”

Two of the biggest issues for rural politicians are a pair of regulations that affect new residential construction. These include the so-called BAT septic requirements in critical areas, or those surrounding the Chesapeake Bay, and the law that dictates all new homes in the state must have indoor fire-suppression sprinklers.

The cost, according to most rural lawmakers, puts new homes out of reach for young buyers.

“Everything outside of a town is well and septic,” said County Commissioner Wilbur Levengood, R-Caroline. “The new septic and sprinkler laws have made a house almost untouchable to a young family. If they get a job here, they’re moving to Delaware.” 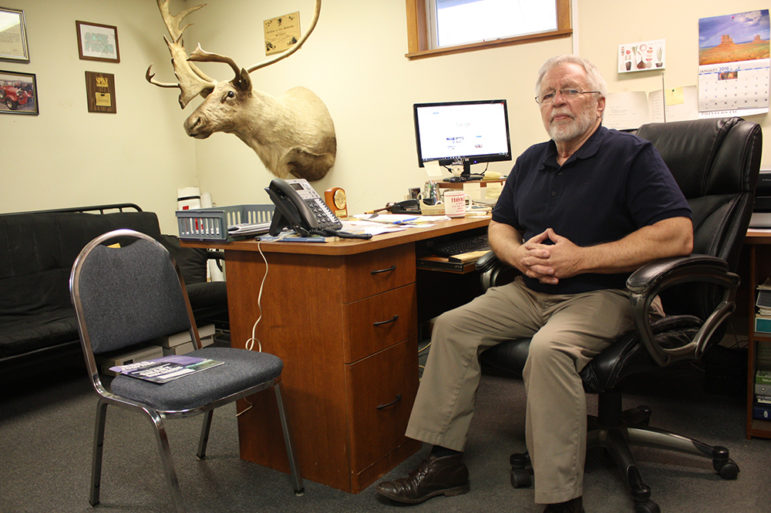 William Valentine, an Allegany County (Maryland) commissioner, in his office at Carl J. Valentine & Son, the plumbing, heating and air conditioning business started by his father in 1947. Photo by J.F. Meils/Capital News Service via AP.

Cuts to the state’s highway user funds were made to every county in 2009. For most counties, those funds would never return.

Caroline County, whose entire annual budget is about $44 million, experienced a similar cut as Allegany from their highway money in 2009. “If you take $4 million in cash away from our roads, that’s a real stifling,” said Levengood. “We’ve cut a lot. It’s hurt a lot of people, but we’ve managed to keep our roads open.”

The problems begin to feel circular. If you can’t fix your roads, it’s hard to entice business. Without business or affordable homes, you can’t keep young people or hope to attract new ones. If your population is decreasing, so is your tax base — which leaves you with less money to maintain your roads.

Some counties and municipalities are beginning to experiment with new approaches, particularly in the economic sphere, but for some the perceived stream of obstacles from Annapolis is simply too much to overcome.

“It’s all politics,” said Paul Edwards. “I don’t care what anyone says.”