SUPREMES TO ADDRESS GERRYMANDERING: The Supreme Court is taking on a case about partisan advantage in redistricting that could have ramifications in Maryland. The justices on Monday said they will decide whether Republican lawmakers in Wisconsin drew electoral districts so out of whack with the state’s political breakdown that they violated the constitutional rights of Democratic voters, according to wire and staff reports at the Daily Record.

MD SCHOOLS TAKE ON DRUG DANGERS: In the ongoing battle to stem the heroin and opiate epidemic in Maryland, the newest focus is a state law that mandates teaching students in elementary schools through college about the dangers of the drugs, reports Pamela Wood in the Sun. Public schools are tweaking drug-education lessons and colleges are preparing sessions for incoming students to comply with the Start Talking Maryland Act, which becomes law July 1.

ON RX POT: Sheilah Kast of WYPR-FM hosts a 30-minute segment on the state’s budding medical marijuana industry, which has been mired in legal challenges, with Erin Cox of the Sun, Dr. Orrin Devinsky,  of the Comprehensive Epilepsy Center at New York University Langone Medical Center, and Gail Rand, a mother who talks about how her son’s epilepsy prompted her to become an advocate for medical cannabis.

MTA DEBUTS BALTIMORELINK: BaltimoreLink, the Maryland Transit Administration’s $135 million redesign of the region’s bus system, received mixed reviews on its first weekday commute Monday, Colin Campbell and Talia Richman report in the Sun. Some people balked at the confusing changes, while others welcomed them. Everyone enjoyed the free rides being offered for the system’s first two weeks.

METRO OVERHAUL: A group of Maryland lawmakers has proposed an overhaul of the Washington-area subway system that would give the struggling rail network the dedicated funding its leaders say it needs, the AP is reporting. The lawmakers’ proposal, released Monday, would also leave it up to the District of Columbia, Maryland and Virginia to decide how to come up with the $500 million in annual dedicated funding that Metro’s general manager has called for.

PG ED BOARD MEMBERS SEEK STATE PROBE: Four members of Prince George’s County’s school board have urged Gov. Larry Hogan to order an investigation into what they allege is a systemic effort to fraudulently boost graduation rates in the Maryland school district, Donna St. George and Arelis R. Hernández of the Post report. The members, a minority bloc on a 14-member board, say the state’s second-largest district engaged in “widespread systemic corruption” that has inflated graduation rates since 2014. They allege that grades were changed and that students were credited for courses they did not take.

A FRANCHOT BREWSKI: Maryland Comptroller Peter Franchot was an advocate for better brewery laws throughout this year’s General Assembly. Even after, Franchot continued to work on ways to promote breweries as part of the state’s economy through promotions and a task force. Now, those efforts have earned Franchot his own personal beer courtesy of Monocacy Brewing Co. in Frederick, Joshua Gordon of the Baltimore Business Journal reports.

FRANCHOT VISITS DLC: A strange thing happened on Friday afternoon: Maryland Comptroller Peter Franchot visited the headquarters of the Montgomery County Department of Liquor Control, writes Andrew Metcalf for Bethesda Beat.  Franchot has called the department that generates about $30 million in profits for the county “the last bastion of a medieval state system.” He has urged county and state leaders to privatize the sales and distribution of alcohol

AUMANN TO STEP DOWN: A four-term Republican state delegate who was expected to be the favorite to succeed Democratic Sen. Jim Brochin in 2018 has announced she will instead leave the General Assembly, Bryan Sears writes in the Daily Record. Del. Susan Aumann, R-Baltimore County, said Monday that she is stepping back to take care of her 90-year old mother, whose health has required an increased need for assistance. The announcement, which surprised some political observers, throws a new wrinkle into a Republican election contest that was believed to be all but settled.

RUNNING AGAINST DONALD TRUMP: Maryland Democrats will run a fierce campaign next year against an incumbent whose name sounds familiar, though he’s never actually run for office. This fellow’s name? “Gov. Larryhogan Anddonaldtrump.” No, Gov. Anddonaldtrump was not the GOP nominee in 2014. Nor did he score an upset victory over a sitting lieutenant governor in an overwhelming Democratic state. And he’s not serving as governor now, Bruce DePuyt writes in Maryland Matters.

CITY COUNCIL BACKS PARIS PACT: The Sun is reporting that the Baltimore City Council, calling President Trump’s recent decision to withdraw the United States from the Paris Climate Agreement “ill-advised,”  unanimously voted Monday to express its intention of upholding the agreement here. The approved resolution, which does not carry the force of law, says the all-Democratic council is committed “to practices that disrupt short-sighted trends in consumption of natural resources and degradation of human health to create a liveable, economical, equitable, and just energy future.” 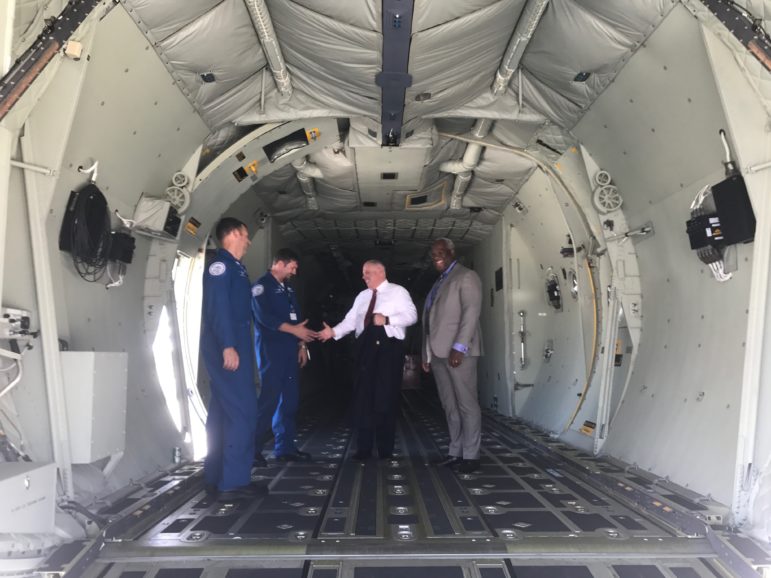 PEROUTKA DENOUNCES SECESSIONIST: Responding to continuing questions about his past association with the League of the South, Councilman Michael Peroutka on Monday night distanced himself from racist comments made by the secessionist group’s leader, reports Amanda Yeager of the Annapolis Capital. At the start of the County Council’s meeting, Peroutka said recent online posts from League of the South founder and president in which he pledges “to be a white supremacist, a racist, an anti-Semite, a homophobe, a xenophobe, an Islamophobe and any other sort of ‘phobe’ that benefits my people” — were “outrageous” and “inappropriate.” The article is topped by a video of Peroutka.

MO CO ATTORNEY COST: Montgomery County spent at least $10 million on attorneys, expert witnesses and consultants to pursue the lawsuit it opted to settle for $25 million last month against the designer and builders of the Silver Spring Transit Center. The tab is expected to grow as additional invoices are tallied, County Attorney Marc Hansen said.