State seafood market to be transformed into food emporium

Dave Webb has been a mainstay at Wild Seafood for decades. His shop is the only retailer currently at the Maryland Wholesale Seafood Market. Photo by Rona Kobell, Bay Journal

For the first time in more than 30 years, the Maryland Wholesale Seafood Market in Jessup, run by a state-created authority, is in line for a major facelift.

It’s an expensive one, too. The planned $40 million project will add 104,000 square feet of space to the Jessup facility and change its purpose from a busy-at-dawn seafood warehouse to a food emporium for its growing base of retail customers.

To be renamed the Maryland Market Center, it will feature a large farmer’s market with local produce, creamery, microbrewery and a commercial kitchen space for small vendors to cook and can products. It will also have sit-down restaurants.

There will be solar panels on the roof, a rain-collection system to recycle the water, and a waste-to-energy system that will convert food scraps to electricity for cooling the building.

The seafood vendors will have refrigerated loading docks, where they can ship and receive their products without a break in the “cold chain” protocols that are so important to ensure food safety.

Once the makeover is finished, the squat, white building near the intersection of Route 175 and Route 1 will resemble the inviting modern markets of Spain and Italy, said Donald Darnall, the executive director of the Maryland Food Center Authority, which runs the market.

That’s been his goal, he said, since seafood dealers like Congressional Seafood Co. and J.J. McDonnell & Co., Inc. moved out to larger, standalone facilities just as his burgeoning Howard County customer base has been demanding more local, quality foods.

“On a world scale, what are markets doing? They are re-inventing themselves,” Darnall said. “What we’re doing here will help preserve and protect the local farmer.”

Across the country, open-air wholesale seafood markets are moving out of cities and suburbs, or closing altogether. The Jessup market thrived in downtown Baltimore until the early 1980s, when city leaders decided that robust tractor-trailer traffic and pungent loading docks didn’t fit in with their urban-renewal ideas.

Fulton Fish Market moved from Lower Manhattan to the Bronx in 2005 to provide better cooling protocols for dealers and more room for upscale development in its wake.

Philadelphia’s city market shut down a few years ago rather than make the necessary improvements.

But more recently, some urban and suburban markets are reversing the trend. One of Darnall’s models is Union Market in the District of Columbia. Once a thriving wholesale market, it declined in the late 1980s when businesses moved to the suburbs. Today, it’s enjoying a resurgence with local vendors and restaurants. 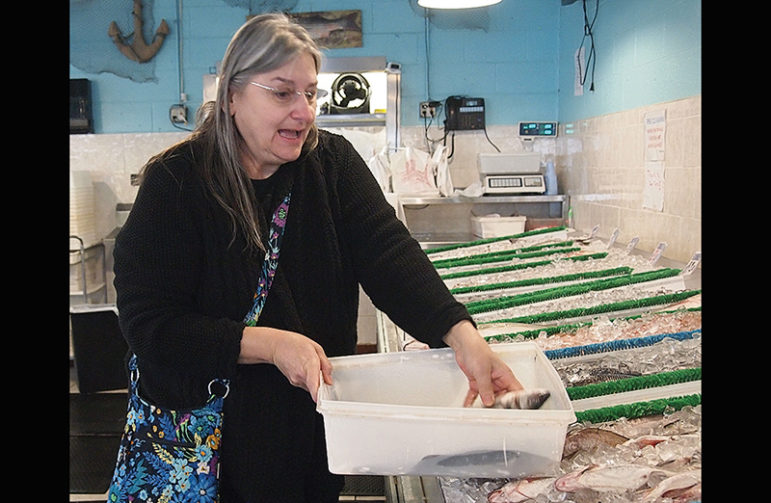 Realtor Sennur (Shenny) Fahral comes to the market at 4:30 a.m. once or twice a week for fresh fish. A native of Turkey, she said the atmosphere reminds her of her coastal home. Photo by Rona Kobell, Bay Journal

The current 102,000-square-foot seafood market isn’t exactly a shopper’s paradise. Most of the action happens at 4:30 a.m., when commuters are still asleep, and retail customers have to dodge pallets and hand trucks to find that Spanish mackerel fillet they want for dinner. It’s not for everyone, and there’s only one retail shop.

“You have all these men milling around. And the thing is, there is a certain cadence to their rhythm. It’s like this strange fishermen’s ballet that you see early in the morning,” said Sennur “Shenny” Fahrali, a local Realtor who comes to the market twice a week at predawn hours to buy her fresh seafood.

Fahrali patronizes Wild Seafood, formerly Frank’s, which is the only retail stall in the market, though customers have always been able to buy from the wholesalers as well.

Wild Seafood’s manager, David Webb, who’s been working at the market for decades, said he’s thrilled that the market is going to focus more on retail customers.

“I think it’s going to be so great for everyone,” he said as he wraps a bright Alaskan salmon fillet for a customer.

The Maryland Food Center Authority, with 28 employees, is a quasi-state agency that also manages a wholesale produce market with more than 20 large vendors.

To fund the expansion, Darnall said, he will have to raise money like any other developer. He got some of the needed capital with the authority’s sale of land to its former tenant, Congressional/NAFCO Seafood, so it could build a new facility next to the market. The total costs of land sale and development were $9 million, according to Congressional.

Stanley Pearlman, who owns Congressional and NAFCO, said even though he moved out to a new headquarters, he still wanted to be close because he is excited about the market’s prospects. A tour of Congressional’s exposed brick and bright, open space offers a peek into what Pearlman expects at the new Jessup.

“It is going to be a food hub,” he said. “Look around. It’s a glimpse of the future that you will see here.”

Rona Kobell, rkobell@bayjournal.com,  is a former writer at the Baltimore Sun.