RX POT FIRM SEEKS INJUNCTION: A medical marijuana company filed an emergency motion Monday asking a judge to forbid the Maryland Medical Cannabis Commission from issuing any final licenses to grow the drug. If granted, the request could put on hold an industry that was poised to get off the ground this month after years of delay and controversy, Erin Cox of the Sun reports.

HOGAN TAKES ON BWI NOISE: Gov. Larry Hogan is stepping in to help residents in a noisy debate near BWI Thurgood Marshall airport. A letter sent to the FAA by the governor is the latest development in a dispute over a nearly two-year-old system of flight patterns traveling to and from BWI, WBFF-TV is reporting.  Residents in Howard and Anne Arundel County say the “Next Generation Air Transportation System” is causing massive amounts of noise pollution.

PREAKNESS’s FUTURE: Jeff Barker of the Sun writes that preserving the 147-year-old Pimlico Race Course as the home of the Preakness likely would require rebuilding the track at a cost of $300 million to $500 million, according to its owner — which has no plans to foot the bill.

ANOTHER BILL SIGNING: Gov. Larry Hogan has scheduled May 25 event to sign some more of the 935 pieces of legislation passed earlier this year by the Maryland General Assembly. The signing will be the fourth since the end of the 2017 session and the eighth overall this year. It replaces a signing that was scheduled for the first week of May that was later removed from the calendar. Hogan has already signed about 550 bills passed by the legislature this year, reports Bryan Sears for the Daily Record.

FAILED DRUG POLICY: The editorial board for the Sun takes on Attorney General Jeff Sessions tough sounding but ineffective drug policy, writing that the War on Drugs has been such an abject failure that the country’s elected leaders seemed to have reached a bipartisan consensus that it was better to focus on prevention and treatment.  In Maryland, there’s been a serious and bipartisan push to reform drug laws to get more addicts in treatment and fewer in prison cells. Clearly, somebody didn’t get the word to Sessions, who has bought into “a brainless, cookie cutter approach that’s been proven ineffective.”

AUDIT FAULTS JUDGES ON CONTRACT AWARDS: The Maryland Judiciary, whose judges often go to great lengths in explaining their legal decisions, failed to document sufficiently why it awarded $26 million in service contracts between July 2012 and December 2015, according to legislative auditors, reports Steve Lash for the Daily Record.

SEAFOOD WORKFORCE FLAGS: Pamela D’Angelo of WYPR-FM reports that the Chesapeake Bay’s crab, oyster and bait industry has been losing its American workforce since the late 1980s, as the old hands retire and younger workers seek better paying jobs. Now it is in a holding pattern waiting on two federal agencies to lift the cap on allowing foreign workers in. Some processing plants have just shut down.

MUSLIM CANDIDATES RECRUITED: A newly formed political action committee based in Potomac says it will train 30 Muslim Americans to run for state and local offices in Maryland in 2018 and also will recruit hundreds of other candidates across the country, Ovetta Wiggins of the Post reports. “If we are not at the table of democracy, we may end up on the menu of authoritarianism,” said Hamza Khan, a longtime Democratic activist in Montgomery County who is executive director of the Pluralism Project.

KHAN TO RUN FOR DELEGATE: Longtime community activist Hamza Khan will run for an open state delegate seat in Germantown-based District 39. Kahn announced Monday he will pursue the position being vacated by Del. Charles Barkley (D-Germantown), who has said he will run for a County Council seat in 2018, Andrew Metcalf writes in Bethesda Beat. 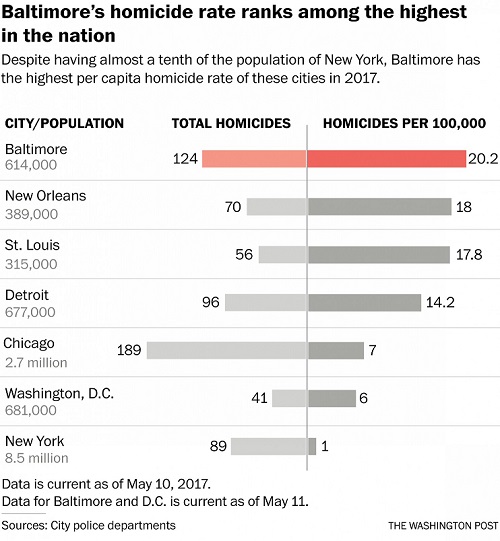 BALTIMORE MURDERS: A chart that accompanied a Washington Post story about murders in Baltimore showed the distressing news about the Baltimore murder rate, higher than several major U.S. cities and far higher than Washington or New York City both in rate and raw numbers.

ROSENSTEIN ON REPUTATION: U.S. Deputy Attorney General Rod J. Rosenstein told a Baltimore business group Monday his top concern in Washington is defending the Constitution, Yvonne Wenger of the Sun writes. The comment came less than a week after he was thrust into the national spotlight when the White House used a memo he wrote to explain why the FBI director was fired.

TRUMP A NO-SHOW: Alas, President Donald Trump did not visit Camp David over the weekend, writes Danielle Gaines in the Frederick News-Post. While a notice typical of a presidential visit was issued by the federal government last week, the White House confirmed Monday that Trump did not come to Catoctin Mountain last weekend. 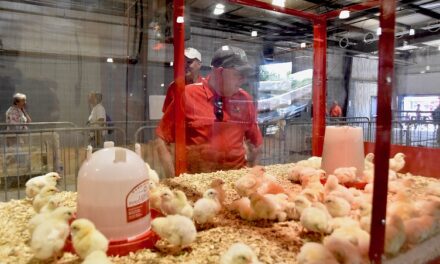