BILLS LIKELY TO GET BIPARTISAN SUPPORT: Michael Dresser of the Sun reports that amid the partisan sniping between Republican Gov. Larry Hogan and Democrats who run the General Assembly, lawmakers are holding hearings on a number of administration proposals likely to gain bipartisan support. Those proposals include jobs initiatives, environmental programs and crackdowns on crime and drugs.

PROSECUTING REPEAT SEX OFFENDERS: As an upstart candidate for Baltimore state’s attorney, Marilyn Mosby went to Annapolis in 2013 pushing a bill to help prosecute repeat sex offenders. Filed late in the session, it had just one sponsor and went nowhere.This year, writes Justin Fenton for the Sun, Mosby is back for a fourth try, with passage in the Senate last year under her belt and now counting the support of Gov. Larry Hogan, who adopted the bill this year as part of his legislative package on crime.

GUINNESS PITCHES MORE BEER: The owner of Guinness beer made a pitch to state lawmakers Monday to increase the amount of beer that can be sold at the brewery it’s planning to open in Relay. The brewery will draw hundreds of thousands of visitors and help “create a Maryland beer halo” that will boost the beer industry, Dwayne Kratt, of the international liquor company Diageo, which owns the Guinness brand, told the House of Delegates Economic Matters Committee during a marathon afternoon of hearings on more than five dozen liquor bills. Pamela Wood of the Sun writes the story.

AGE 18 TO MARRY: Heather Cobun of the Daily Record reports that a bill to outlaw marriage for anyone under the age of 18 without exceptions was reintroduced in the General Assembly this year, making Maryland part of a national movement to outlaw child marriage under any circumstances. Current law permits a 16- or 17-year-old to get married with parental permission or proof of pregnancy; both are required for a 15-year-old to get married.

SAVING THE BAY: The editorial board of the Sun opines that the Chesapeake Bay has little chance of recovery if Maryland isn’t willing to protect its open spaces and reduce sprawl. Under the last administration, this directed development to areas like towns and cities that can handle it and protected open fields and forests that can’t. There are, however, some individuals who believe that to own a piece of land is to have unlimited opportunities to build on it whatever they like — and that appears to be a prevailing sentiment among elected officials in Cecil County.

TRANSPARENCY IN TEACHER SALARIES: In an op-ed for the Post, J.H. Snider urges the state Department of Education to make actual  teacher salaries public and not just the statistics, writing that, “the highest-paid teacher in the Maryland county where I live earned more than $150,850 a year in salary alone. But you’d never know that from the salary statistics published by the Maryland State Department of Education. The statistics for beginning, mid-level and maximum salaries are based on schedules, not actual salaries. But a teacher’s salary schedule — based on years of experience and degrees — merely sets base pay.”

PRESSURING ISRAEL: Marc Steiner of WEAA-FM hosts a discussion attempts to thwart the Boycott, Disinvestment and Sanctions movement in Maryland. The BDS is a global campaign attempting to increase economic and political pressure on Israel with the stated goals of ending of Israel’s occupation and colonization of Palestinian land and the Golan Heights, among other things. Proponents of a bill in Annapolis say the BDS movement is an effort to destroy Israel. Steiner hosts Dels. Jimmy Tarlau of Prince George’s County and Ben Kramer of Montgomery County. 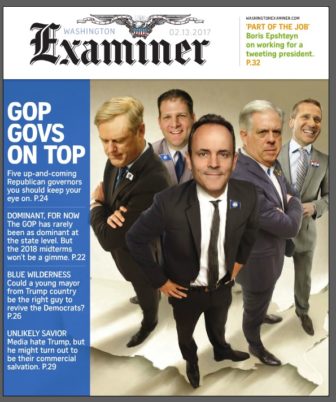 HOGAN COVER BOY: Gov. Larry Hogan was on the cover of the Feb. 13 Washington Examiner magazine, the glossy conservative successor to the former conservative daily tabloid, as one of “Five up-and-coming Republican governors you should keep your eye on.” It actually only has a few paragraphs on Hogan, quoting political advisor Mike Leavitt, who cited several accomplishments: “three balanced budgets without tax increases, moving Maryland from last to first in Mid-Atlantic job creation and record education funding.” Why is Hogan so popular? “He says what he’s going to do and does what he says he’s going to do. He’s a straight shooter,” says Leavitt.

GREEN BAG APPOINTMENTS: The Cumberland Times News reports that former Cumberland City Councilwoman Nicole Alt-Myers has been nominated by Gov. Larry Hogan to a seat on the Maryland Economic Development Corp. Board of Directors, one of 189 nominations presented to the Maryland Senate known as “Green Bag” appointments. 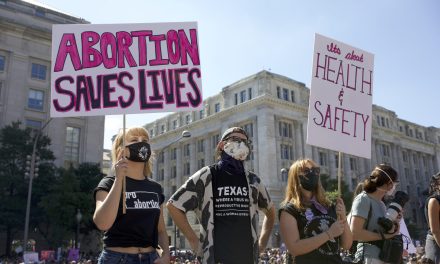