For a second year in a row, Sen. Jim Brochin is trying to repeal the retail sales tax on alcohol that went from 6% to 9% in 2011. He said it unfairly targets one industry and puts Maryland at a disadvantage with neighboring states.

“Currently surrounding states are charging less in sales and use tax…and it’s having a negative effect on local businesses,” Brochin told the Senate Budget and Taxation Committee on Wednesday.

He said alcohol consumption in the state has declined by 10% since the tax went into effect — while sales in other states are up 3.3%.

Brochin, D-Baltimore County, acknowledged the fiscal note on his proposal, SB157, which forecasts a $700 million revenue loss through fiscal 2022, but he believes much of it could be recouped with an increase in consumption.

“I’m not naïve enough to think it would be revenue-neutral but it might end up being close,” Brochin told the committee.

The Department of Legislative Services projects a 3% increase in sales if the tax is repealed.

Brochin said a $14 glass of wine with a $24 entre “seems incredibly out of whack.”

Marty Kutlik, owner of Ridgely Wine & Spirit in Lutherville said the state could maintain the same revenue stream by moving the 2011 increase to an excise tax because it would reflect higher sales. An excise tax is collected at the wholesale level.

Kutlik said more than 75% percent of the time his customers use credit cards, and processing the higher tax rate results in more fees charged by the credit card companies.

In opposing the bill, Ann Ciekot, director of the Maryland Chapter of the National Council on Alcoholism and Drug Dependence, said repeal would reduce the revenue stream for “important public health measures.”

Ceikot said a report was due out next month that would also show a decrease in drunk driving incidents with the higher tax rate. She said the public health benefits far outweighed the burdens on businesses.

But Brochin rejected the argument that higher taxes results in lower rates of sexually transmitted diseases.

“I’ve never seen any study that shows that is the case,” Brochin said.

He said the tax hike was more a budget measure than a public health issue in 2011.

“That was a deal they made so they could balance the budget and I don’t believe you make a deal on one industry,” he said. “The sales tax in Maryland is 6% so why are we picking on alcohol at 9%. I think it should be comparable with everything else.” 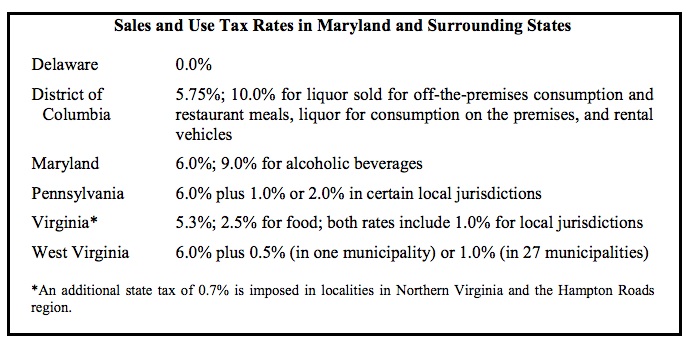 The 2011 tax hike began as an excise tax on liquor wholesalers. When the curtain fell on the 2011 session the excise tax morphed into additional 3% tax on retail sales. The extra revenue was intended to aid those with developmental disabilities, but instead it went mostly for school construction in districts of lawmakers who supported that tax.

Brochin opposed the tax hike from the start and then lamented in the fall of 2011 that the revenue had not been shared with his 42nd district, where elementary schools were at 140% capacity.