MORE AUTHORITY FOR COMPTROLLER: The Office of the Comptroller will have more power to investigate and enforce laws against tax fraud and identify theft if legislation introduced as part of Gov. Larry Hogan’s agenda succeeds in the General Assembly, Heather Cobun of the Daily Record reports.

REVERSING CUTS TO CITY: Infuriated Baltimore state lawmakers vowed Thursday to reverse Gov. Larry Hogan’s budget cuts that revoked money for programs passed last year to help the city’s poorest residents, Erin Cox and Pamela Wood write in the Sun. “This is a watershed moment,” said Sen. Bill Ferguson, a Democrat on the Budget and Taxation Committee. “We are prepared to take any means necessary.”

JUSTICE REINVESTMENT ACT: A legislative oversight hearing Thursday on the Justice Reinvestment Act revealed implementation challenges under the landmark 2016 measure that changes the way Maryland’s criminal justice system treats non-violent offenders from a tool of punishment to a gateway to treatment, Steve Lash of the Daily Record reports. 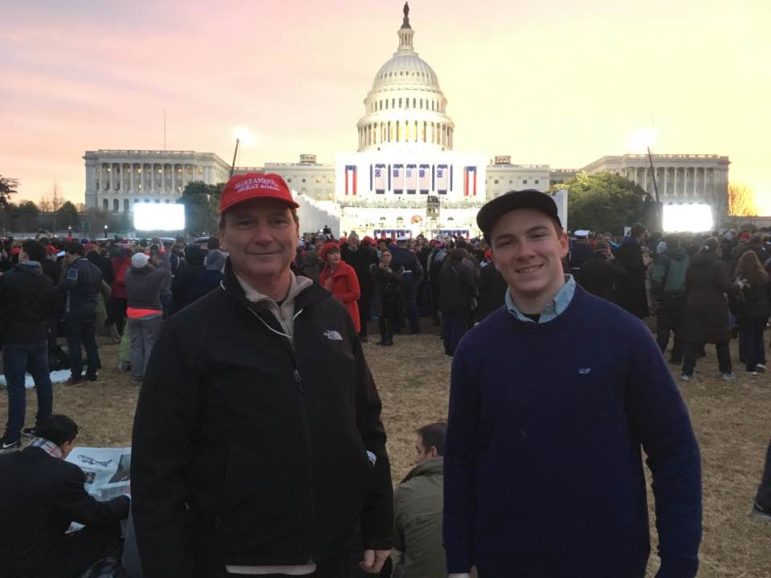 Many Maryland Republicans are posting inaugural shots on Facebook. Here’s a shot of Del. Rick Impallaria, left, early Friday morning at the Capitol. 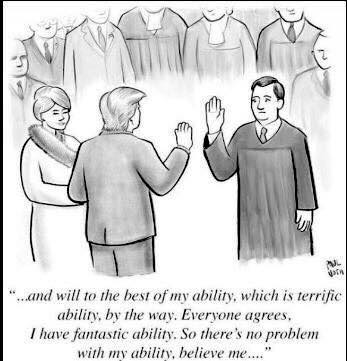 Couldn’t resist posting this cartoon from the New Yorker.

REDISTRICTING REFORM: Gov. Larry Hogan announced Thursday that he is trying again to reform the way legislative districts are drawn in Maryland, Tamela Baker is reporting for the Hagerstown Herald Mail.  Hogan introduced a bill last year that would have put responsibility for redistricting in the hands of a nonpartisan commission.

VETO UNLIKELY OF HOGAN MTA BILL: A bill establishing the Maryland Transit Administration Oversight and Planning Board may get enough votes in the House to override Gov. Larry Hogan’s veto from the 2016 session, but the chance it clears the 29 votes needed in the Senate is slim, according to several lawmakers in both parties, Daniel Menefee of MarylandReporter.com writes.

CARROLL COMMISSION VACANCY BILL: Carroll County’s delegation to the General Assembly decided Thursday to reject a change to the way the county fills commissioner vacancies for a second year in a row. The delegation voted unanimously against sponsoring the proposed legislation, which would have allowed county commissioners to fill vacant seats by choosing from a pool of three candidates provided by the central committee of the same party as the departing commissioner, Amanda Yeager writes in the Carroll County Times.

MORE ON FIRED FAKE NEWS VOGT AIDE: Phil Davis of the Annapolis Capital interviews Cameron Harris, the recently fired aide to Del. David E. Vogt. Harris admits he still hasn’t quite grasped the magnitude of being a known proprietor of one of the country’s most notorious fake news websites. When he answers the door at his new Annapolis home, one he said he only moved into about a week ago, he’s wearing an old “Blaine Young for County Executive” T-shirt and shorts. His shirt both reveals his political affiliation — Republican — and his political origins, a political player in Frederick County, most recently a campaign manager for Vogt’s run for Congress in 2016.

ARUNDEL’s FUTURE: Chase Cook of the Annapolis Capital writes that Anne Arundel County and Annapolis elected officials fluffed their feathers at a legislative breakfast where politicians made pitches on success and potential improvements in the county, including the mayor defending his “bread and butter” strategy, delegates discussing the “road kill bill” and an acknowledgment of uncertainty as Donald Trump inauguration looms.

RACE FOR BA CO EXEC: Three Democrats who may vie to replace Baltimore County Executive Kevin Kamenetz in 2018 have combined to raise more than $1.2 million in the past year, according to new campaign finance reports. County Councilwoman Vicki Almond raised $244,000 to bring her available cash to more than $483,000, the most of any candidate who has said they’re considering a run for county executive in 2018. Sen. Jim Brochin is just behind Almond, having raised $248,000 and with $471,000 in the bank. Former state Del. John Olszewski Jr. raised $175,000, giving him about $300,000 on hand, Pamela Wood of the Sun writes.

LEGGETT WAVERS ON WAGE HIKE BILL: Montgomery County Executive Ike Leggett has not yet decided whether to sign a $15 per hour minimum wage bill, a county government spokesman said, despite a demonstration Thursday morning by a coalition of labor, religious and community organizations who called for his signature, Patricia Sullivan reports for the Post.

PUGH CALLED TO COURT: The federal judge overseeing the Baltimore police consent decree has asked Mayor Catherine E. Pugh to appear at a hearing in U.S. District Court next week to discuss terms of the agreement, Justin Fenton and Kevin Rector are writing in the Sun.

VAN HOLLEN TO OPPOSE 3 TRUMP PICKS: A few weeks into his first term as a U.S. senator, Chris Van Hollen (D-Md.) announced that he will oppose three of President-elect Donald Trump’s Cabinet picks: Jeff Sessions for attorney general, Chris Pruitt for administrator of the Environmental Protection Agency and Betsy DeVos for secretary of education, Jenna Portnoy of the Post is reporting.