DESCHENAUX DISPUTES HOGAN CLAIM: Michael Dresser of the Sun reports that nearly half of the transportation projects Gov. Larry Hogan identified as at risk because of a new law the General Assembly passed are not funded anyway, the legislature’s chief analyst says. In a letter to the assembly’s Democratic leaders, Warren G. Deschenaux disputed the central premise of Hogan’s campaign against a law the Republican governor has dubbed the “Road Kill Bill.”

FRACKING FIGHT FORESHADOWED: A General Assembly hearing Tuesday on regulations to protect water quality and public health if fracking begins in Maryland foreshadowed an imminent fight over whether to ban the natural gas-extraction process before the proposed rules could even take effect next year. Maryland Environment Secretary Ben Grumbles called the rules a “platinum package,” a step up from the “gold standard” former Gov. Martin O’Malley applied in fracking rules his administration released early in 2015, Scott Dance reports in the Sun. 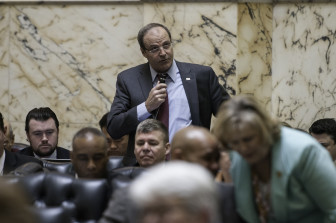 MCMILLAN, BUSCH IN WAR OF WORDS: Del. Herb McMillan and House Speaker Michael Busch, who represent the same district, have been sparring in the pages of the Annapolis Capital over the last three weeks. It began with McMillan criticizing Busch for his criticism of Gov. Larry Hogan’s decision not to endorse the nominee of his party.

STATE VET CAUTIONS ON AVIAN FLU: An outbreak of bird flu in more than a dozen countries is putting Delmarva’s chicken industry on high alert for the second time in two years. Jeremy Cox of the Salisbury Daily Times writes that although bird flu hasn’t been found in the United States yet, Dr. Michael Radebaugh, Maryland’s state veterinarian, says that now is the time for farmers to start preparing.

BAY FUNDS SOUGHT: Maryland congressmen are calling for the U.S. Department of Agriculture to redirect unspent funding to Chesapeake Bay farmers trying to reduce runoff pollution, reports Josh Bollinger in the Cecil Whig.  Two letters — one from U.S. Senators dated Nov. 30 and the other from members of the U.S. House of Representatives dated Dec. 8 — were sent to USDA Secretary Tom Vilsack. Among the signers of the letters are U.S. Sen. Ben Cardin and outgoing Sen. Barbara Mikulski, both D-Md., and future Sen. Chris Van Hollen.

USDA CONSERVATION FUNDS AVAILABLE: USDA’s Natural Resources Conservation Service is accepting applications for the Agricultural Conservation Easements Program. State and local governments, nongovernmental organizations and private landowners who are interested in protecting and enhancing land through an agricultural or wetland easement are encouraged to apply, with $1.8 million available for Maryland wetland easements and restoration, writes Michel Elben for the Carroll County Times.

COLUMBIA AT 50: BUILDING SCHOOLS: In Part 6 of his series on the history of the town of Columbia, now 50 years old, Len Lazarick explores the rich history of its school system, from its creation under the vision of developer Jim Rouse and his staff to its “hippie” days and to now, where ethnic diversity in the schools is high, test scores have suffered and Columbia has indeed become the urban core of Howard County.

RALLY AGAINST RACISM IN HOWARD: Hundreds of people packed an auditorium in Howard County Tuesday night to have some candid discussions after several racist incidents involving high schoolers. Howard County prides itself on diversity. So this is not the type of situation they’re proud of, and hundreds took a stand against what’s been happening in their backyard to condemn recent incidents of racism in its schools, Ava-joye Burnett of WJZ-TV reports.

PAY RAISES IN BALTIMORE CITY: Come Jan. 1, 2017, Baltimore City Mayor Catherine Pugh and other top officials will receive 2.5% pay increases, reports Mark Reutter for Baltimore Brew. The Board of Estimates, which includes the mayor, council president and comptroller, is set to approve the salary increases for themselves and members of the City Council today.

6 MARYLANDERS GET CLEMENCY: Six Marylanders were among 231 people granted clemency Monday by President Obama in what White House officials described as the most pardons or commutations granted by a president in a single day in U.S. history. John Fritze of the Sun writes that two of them are from Baltimore, one is from Baltimore County, two are from Prince George’s County and one is from Washington County.

MATCHING GRANT FOR MARYLAND REPORTER: MarylandReporter.com is one of 57 nonprofit news organizations from around the country that will receive matching grants for any donations received over the next month until Jan. 19. Any donation of any size up to $1,000 will be matched dollar for dollar by the Knight Foundation, a major funder of nonprofit journalism.