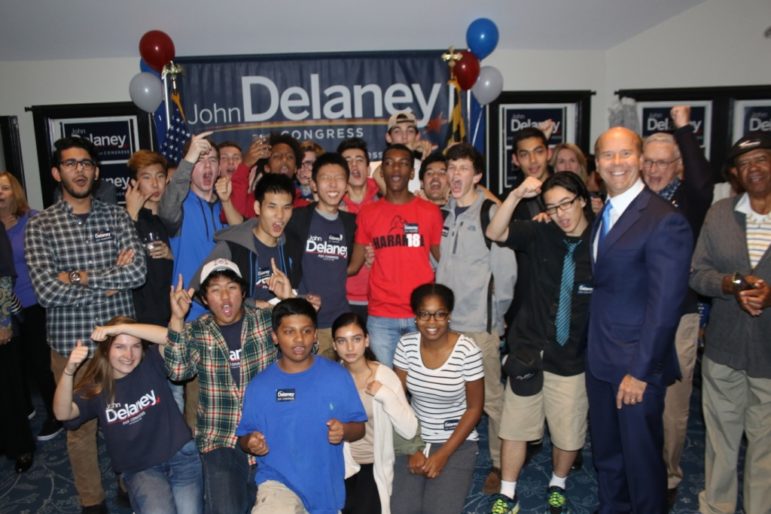 Delaney handily defeated Republican candidate Amie Hoeber 55% to 41%. Delaney spent $1.4 million on the race, and Hoeber spent close to $1 million, plus independent spending by a super PAC funded by her husband.

“Our campaign message was simple; we have to put the country first, leave the divisive rhetoric behind and work together to create good jobs, expand opportunity and leave a better future for the next generation,” Delaney said in a campaign statement.  “The country wants us to work together for the common good and that’s my commitment to all of my constituents – Democrat, Republican, or Independent.”

No plans to run for governor

Delaney shot down any interest in a future run for governor, however, when asked about it.

“I have no plans to run for governor,” Delaney said, despite earlier speculation such a run was in the works.

Since Delaney has become a representative for the western portion of Maryland, he said he has brought cable television to Garrett County, flood relief assistance to Clear Spring in Washington County and “hub-zone legislation” in the rural economic areas to help small business.

Delaney chose to celebrate his victory among 100 or so volunteers and supporters with friends and family in a small Gaithersburg restaurant, instead of a larger Silver Spring venue with party leaders. The Maryland Democratic Party, Senator-elect Chris Van Hollen, Representatives-elect Anthony Brown and Jamie Raskin and the Maryland Clinton Campaign team hosted the party.

“The Sixth District is a very competitive district and we had a very large multi-hundred volunteer base.  We felt the right thing to do as an expression of our thanks is really to honor them.”

“I get it.  He wanted people from Hagerstown, Frederick, Cumberland and northern Montgomery County to be able to come in,” Maryland Democratic Party Chairman Bruce Poole said.  “We decided on Silver Spring.  It’s Chris Van Hollen’s territory.”

Poole said he was more interested in how the races ended up for the night.

“I’m interested in Van Hollen, Ruppersberger and Delaney.  Do they win and by how large a margin,” Poole said in a phone interview.  “It will be a sign if they win by a large margin, it shows the idea that Maryland is not trending to a purple state.  It means the tea leaves after 2014 are not true.”

While it was not apparent how many volunteers made the trek from Washington, Garrett and Allegany Counties – part of Delaney’s gerrymandered,  five county district – several local lawmakers who also volunteered were on hand to help Delaney celebrate.

Sen. Roger Manno, D-Montgomery, who knocked on doors for Delaney over the last two months, said his district 19 crosses over three congressional districts, the 3rd, the 6th and the 8th.