Republican losses did not dampen celebration of Trump’s win

Maryland Republicans were losing the U.S. Senate race by a wide margin, losing hard fought races for Congress, and yet Tuesday night in a ballroom at the BWI Marriott, they were celebrating and looking ahead to the 2018 election with glee.

And it was only 10:30 p.m., over four hours away from Donald Trump’s victory speech in New York, yet they were cheering every return.

Rep. Andy Harris, who will remain the only Republican in Maryland’s 10-man congressional delegation, was the last candidate to take the stage, but he was pumped about Trump trends and the prospects for Maryland Republicans in coming years.

“What a night! They just called Ohio for Donald Trump,” Harris shouted. “He’s going to be the next president of the United States.” 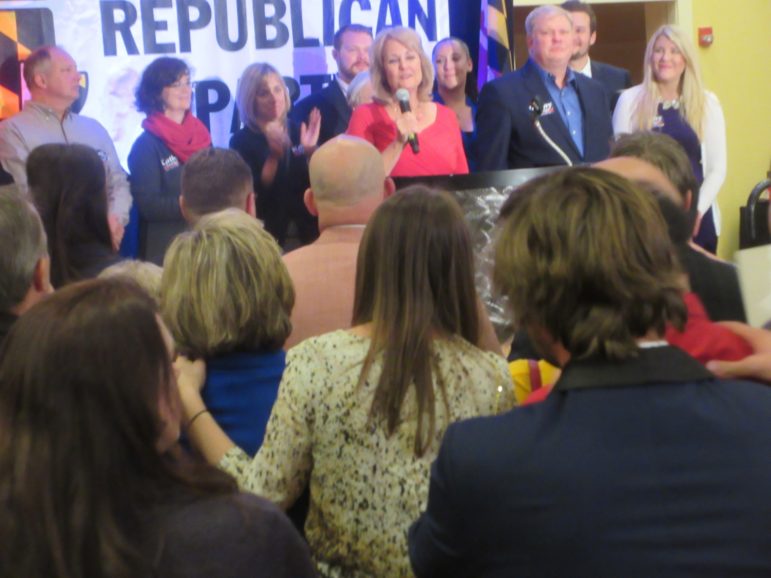 Del. Kathy Szeliga thanks supporters of her Senate race.

He praised the achievement of Del. Kathy Szeliga, his former aide and campaign manager, losing to Democrat Chris Van Hollen 60% to 36% in the race to replace Barbara Mikulski in the U.S. Senate

He said Van Hollen “better treasure every one of those six years he has down there because he’s not going back after that because he’s exactly what’s wrong with Washington.”

“We know there’s going to be lawsuit after lawsuit when Donald Trump looks like he’s the winner tonight,” Harris said.

“We know we’ve had the best candidates across the state,” the congressman went on.

“Tomorrow morning, with Donald Trump as president, we start the 2018 campaign election where we elect Larry Hogan as the next governor of the state of Maryland, where we elect enough delegates and senators” that they can sustain Hogan’s veto of a Democratic redistricting map, “where we elect Mark Plaster to the 3rd congressional district, where we retire Dutch Ruppersberger, where we retire John Delaney, and we bring Maryland back into the red column.” Democrats Ruppersberger and Delaney represent the 3rd and 6th congressional districts, beating challenges from Del. Pat McDonough and Amie Hoeber.

Harris recalled the 1980 presidential race where Ronald Reagan was considered dangerous, like Donald Trump, but went on to become “one of the best presidents of the modern era.” He said voters were choosing Trump “over business as usual.”

“When we wake up tomorrow morning, [it will be] 730 days till the next election, when we take back Maryland for the Republicans.”

Plaster, a doctor who ran against Rep. John Sarbanes, D-3rd, for more than a year but only got 34% of the vote, promised the Republican crowd. “I’m coming back.”

“Next time, the most popular governor in the United States is going to be at the top of the ticket,” Plaster said. “We’re going to win the 3rd District. You can take it to the bank.”

Szeliga did not mention her plans, saying only, “We came up a little short this time.”

Maryland Democratic Party Chair Bruce Poole dismissed the GOP rhetoric. “It will be a sign if they win by a large margin, it shows the idea that Maryland is not trending to a purple state,” Poole said in a phone interview with MarylandReporter.com. “It means the tea leaves after 2014 are not true.” 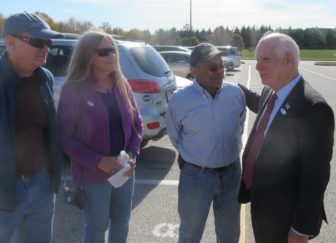 Harris made no mention of Democratic U.S. Sen. Ben Cardin, whose second term is up in 2018. In a brief interview earlier on Tuesday as he toured polling places around the state with Van Hollen, Cardin deflected rumors that he might resign or retire.

Cardin said voters deserved at least a brief rest before the next campaign begins. But he suggested that anyone interested in his future plans should take a look at his schedule of appearances and examine his campaign fundraising reports. 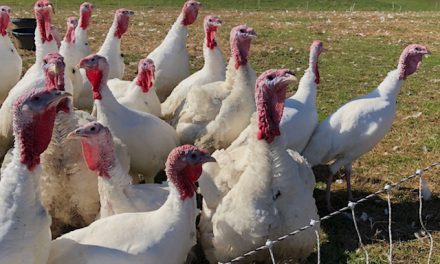