HOGAN’S RE-ELECTION CHANCES: The Washington Post/University of Maryland poll of 906 Marylanders finds that just 46% of those surveyed say they would vote for Hogan, a Republican, should he run for re-election in two years while 30% say they would vote for the Democratic candidate, and 22% had no opinion, Robert Lang of WBAL-AM reports.

SUPPORT FOR LATER SCHOOL START: The vast majority of Marylanders back Gov. Larry Hogan’s recent order requiring public schools to extend summer recess through Labor Day, but far fewer share his support for fracking, according to a Washington Post-University of Maryland poll, Josh Hicks and Emily Guskin of the Post write. The survey, which covered a broad range of topics, also found that support for legalizing recreational marijuana use has risen sharply in Maryland over the last two years, as the state has begun licensing businesses to grow marijuana for medical purposes.

HALT TO PRE-K SUSPENSION SOUGHT: The Legislative Black Caucus will get behind a push to curb school suspensions and expulsions of prekindergarten and other young students, writes Michael Dresser for the Sun. Del. Cheryl D. Glenn, who chairs the caucus, said Thursday the group will support legislation planned by Del. William C. Smith Jr. that would ban the practice. “How can you suspend children in pre-K?” Glenn said. “If you can’t control children in pre-K, there’s something wrong with the whole educational setup.”

BLACK CAUCUS EYES RX POT LICENSING: The president of the Maryland Legislative Black Caucus said Thursday that the group is committed to introducing emergency legislation to pause the state’s medical marijuana program until questions surrounding racial disparities in the awarding of growing licenses are resolved, Ovetta Wiggins of the Post reports. “This is an urgent issue,” said Del. Cheryl D. Glenn. “We are not going to let . . . the black community get shut out of this market.”

STATE ADOPTS EMAIL SYSTEM: Maryland state government has adopted an email encryption system first developed by the NSA so that employees can share sensitive information with one another, reports Ian Duncan of the Sun. Virtru, a company founded by a former National Security Agency employee to market the technology, announced Thursday that after a pilot program in the prisons department some 15,000 employees are now using the system.

TRAFFICKING’S JUVENILE VICTIMS: A state workgroup is recommending that juvenile victims of human trafficking will not be prosecuted for sex crimes in Maryland, despite objections from law enforcement. From 2012 to October of this year, 82 girls in Maryland were confirmed as victims of human trafficking, said Audra Harrison, communications director for the Department of Juvenile Services. Hannah Lang of CNS reports the story in MarylandReporter.com.

DON’T BE LIKE TEXAS: The editorial board for the Sun gives a shout-out to MarylandReporter.com concerning the Heritage Foundation’s Stephen Moore’s visit to an MBRG breakfast. Morris had urged Maryland to be more like Texas. “If there’s one bit of advice we would give Maryland business leaders … Don’t be like Texas. Ever. Just a couple of blocks from The Sun’s offices in downtown Baltimore, the non-profit, non-partisan Annie E. Casey Foundation evaluates the lives of children and families across the country … Maryland earned top-third status for overall child well-being, ranking 16th among the 50 states. And Texas? Right down there at 43rd with such notables as Mississippi, Alabama and Louisiana.” Here’s the correct link to the original story. 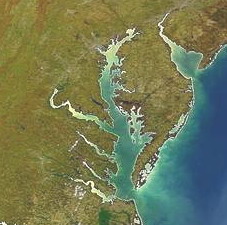 Photo by University of Maryland Center for Environmental Science

KEEP CLEANING UP BAY: In an op-ed for MarylandReporter.com from the Bay Journal News Service, Alix Murdoch of the Chesapeake Bay Foundation writes that the Chesapeake Clean Water Blueprint, which includes both pollution-reduction commitments from states and critical federal oversight, rightly gives us confidence that the region will accelerate pollution reduction and significantly improve water quality in local rivers and streams and the Bay by 2025. But a provision, introduced on the House floor by Rep. Bob Goodlatte, R-Va., would undermine the Chesapeake Clean Water Blueprint.

CORRUPTION IN STATE PRISONS: With the latest round of federal indictments against Maryland corrections officers, top law enforcement officials are again touting their efforts to root out corruption while facing questions over why such misconduct continues, Justin Fenton and Kevin Rector of the Sun report.This week’s indictment of 80 people, including 18 corrections officers, at the state prison on the Eastern Shore outlined exchanges of hundreds of dollars at a time between inmates and officers. The inmates wanted heroin and cocaine to deal inside. The officers were smuggling the drugs in.

FEDERAL DELEGATION SEEKS SHERIFF’S RESIGNATION: WBAL-AM is reporting that Maryland’s federal delegation is asking for Howard County Sheriff James F. Fitzgerald to show respect to fellow law enforcement and citizens by stepping down from his post. U.S. Sen. Ben Cardin and Sen. Barbara A. Mikulski, with U.S. Rep. Elijah  Cummings, Rep. Dutch Ruppersberger and Rep. John Sarbanes (all D-Maryland), have written to Fitzgerald asking him to resign his position in the wake of a detailed report from the Howard County Office of Human Rights.

TRANSIT NEEDS IN WA CO: Washington County officials reacted favorably Thursday to the Maryland Department of Transportation’s continued interest in pursuing a potential federal grant to help pay for much-needed improvements to busy Interstate 81, reports CJ Lovelace for the Hagerstown Herald Mail. “Everything that goes north and south, and also east and west along (Interstate) 70, is going to impact I-81, and we need to make sure we’re ready for it,” said state Del. Brett Wilson, R-Hagerstown. “We’re barely hanging on now with the traffic volume.”

CECIL SOLAR PROJECT READY: Phase one of Cecil County government’s first solar project is about two months ahead of schedule, but still awaits “permission to operate” from Delmarva Power, before energy savings can begin adding up, Cheryl Mattix reports for the Cecil Whig.