Illustrations in a fundraising email from the Democratic Congressional Campaign Committee.

The folks at the Democratic Congressional Campaign Committee apparently think so, and have been doing it for years, according to published accounts.

In just the past week, as the Sept. 30 report filing deadline approached, I got over 40 emails from the DCCC with subject lines that included “We’re BEGGING,” “We’re losing,” “Trump WINS,” “TRUMP.WINS.EVERYTHING” and “throw in the towel.”

One of my favorites came Wednesday from “Joe Biden,” with whom I’m obviously on a first name basis. “kiss all hope goodbye” was the subject line from Joe:

“Get Barack’s email?
See Michelle’s?
Well I’m joining them — because you’ve got a massive choice to make.
We can do nothing, let Donald Trump get away with saying whatever he wants, and wake up on Election Day with him and Paul Ryan taking us backwards.
Or we can fight back, help elect Hillary Clinton, and wake up on Election Day with her and Nancy Pelosi leading us forward.
Step up before the most important deadline of this election — I’m pleading with you!
We’ve got just 48 hours to get 3O,OOO grassroots gifts.
Will you pitch in $1?

I’ve watched Barack work his heart out these past 8 years.
And if Trump wins with a Republican Majority in Congress, you can kiss all the progress we’ve made as a country goodbye.
I’m not having that, Len.
We’re up against the biggest deadline in this election.
Let’s make a stand and help Hillary win on Election Day”

Emails from Barack and Michelle too

I did indeed get the emails from Barack and Michelle — the president and first lady contacted me twice. By Friday afternoon, Uncle Joe was clearly unhappy with my failure to respond. The subject line on Biden’s email was “painful defeat.”

I’ll be blunt: with 10 hours left, things aren’t looking good.
If the Republicans outraise us tonight, it might just cost us this election.
Please, help me close that gap before midnight — I need 8,936 more folks on board.
The clock is ticking, Len. 10 hours until the most important deadline of the election.
Will you chip in $1?

Sorry, Joe, but like many political reporters and editors, I only sign up for these emails to keep in touch with what’s going on.

By Saturday afternoon they were still laying on the guilt trip, with pictures of Michelle and Barack — since we all seem to be a first-name basis.

We were devastated we fell short last night, but this is even more alarming.
As of 2 PM, right-wing Super PAC attacks have surpassed the $43O MILLION mark.
The Obamas both asked for your help — because we’re getting BURIED out there in the final 5 weeks.
We’d hate to see all the work we put into this election get washed away by a flood of last-minute attacks.
We really need every grassroots supporter to dig deep right now.
Remember: The Quadruple Match is extended for a single day.
Can you help?

Urgent call from the president

By 6:37 p.m., DCCC enlisted the president again. “I need you to stand with me one last time,” said the photo of Obama. “The clock is ticking.”

“We’ve never seen the President give such an urgent call to action,” said the DCCC. Really? Have you checked your previous emails?

The pleas, the desperation, and the guilt trip finally seemed to have worked.

This. Is. I-N-C-R-E-D-I-B-L-E!!!![Note the utter sincerity indicated by the four exclamation points. Do interns write this stuff?]
As of 8 PM, we’re within striking distance of not only hitting our goal — but hitting 2,OOO,OOO grassroots gifts for the year.
Trump will go bonkers if we get there! We need just 1 more gift from 21045.
Will you be the one to put us over the top?! 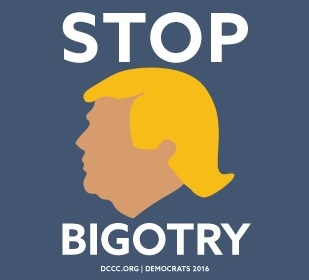 The sticker from the Democratic Congressional Campaign Committee.

Sorry, guys, but clearly some people came through — or at least the DCCC claimed they did Sunday morning.

OK, we get it — we leaned on grassroots supporters A LOT last month.
Honestly, we were worried we would lose.
But the support we saw from our grassroots Democrats was INCREDIBLE!!!
Thanks to you, we know we have what it takes to defeat Trump in November.
We owe you a huge thank you — so we’re giving away everyone’s favorite STOP BIGOTRY sticker today for free!

I do get fundraising appeals from Donald J. Trump too, but they only come once a day at most. They are never desperate for money, but eager to match your contribution out of his own pocket.

From a Trump email

For a candidate who has been winning by breaking all the political rules, they sound much more like traditional fundraising appeals, with the usual “Crooked Hillary” and fighting to “Make America Great Again” thrown in. This week contributors could win a chance to attend next Sunday’s debate.

And one thing you can count on with a Donald J. Trump email. He is never, ever losing. That is for LOSERS, like the DCCC. Believe me.

Committee gets a dose of drug overdose treatment