HEALTH INSURANCE GOOD & BAD NEWS: The Maryland Insurance Administration has approved premium rates for 2017 small group and individual health insurance plans, and the good news is that rates for small group markets are only increasing by single digits — and some are going down, reports Tamela Baker for the Hagerstown Herald Mail. The not-so-good news is that rates for individual plans are going up by 20% to 30%.

ZIKA DOLLARS: The $1.1 billion allocated by Congress last week to fight Zika will mean more money for states and localities to control and monitor for the mosquito-borne virus and for researchers to develop vaccines and diagnostic tests, reports Meredith Cohn in the Sun. 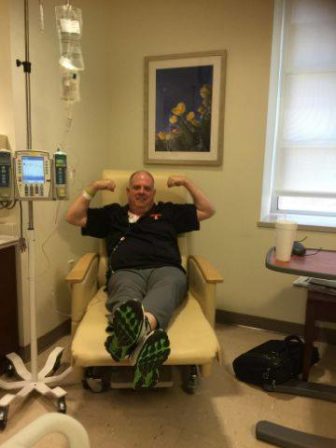 Gov. Larry Hogan got his last chemotherapy treatment for his cancer on Monday. From Hogan’s Facebook page.

HOGAN ENDS CHEMO: Gov. Larry Hogan said Monday he completed chemotherapy for cancer, which had been in remission since last year, writes Erin Cox in the Sun. Hogan posted on his Facebook page a photo of himself flexing his biceps in a Baltimore hospital room, a chemotherapy machine feeding drugs into a port in his chest.

WELLS FARGO & MARYLAND: Anamika Roy of the Daily Record reports that as some states are reconsidering their relationships with Wells Fargo after the revelation that it opened millions of unauthorized accounts for its customers, the issue of whether Maryland can do the same — and whether it will — has yet to be determined. Maryland treasury officials said Monday that the state agency has evaluated its relationship with Wells Fargo and found that the state Treasurer has no underwriting contracts or investment accounts with the bank. All of the Treasurer’s dealings with Wells Fargo are on the banking side. A determination whether to suspend doing business with Wells Fargo is under the Attorney General’s purview based on standards set in state law.

NEW CASINO TO OPEN DEC. 8: GM National Harbor will open Dec. 8, casino officials announced Monday. Ben Weathers of the Annapolis Capital reports that the resort will become the third casino in a 50-mile radius, along with Hanover’s Maryland Live and Baltimore’s Horseshoe Casino to compete over a similar pool of patrons. The Cordish Cos., which owns Maryland Live, recently invested $250 million in two hotels near the casino’s Arundel Mills location.

FITZGERALD MUST GO: The editorial board for the Sun writes that it is time for Howard County Sheriff James Fitzgerald, a third-term Democrat, to step down. The board cites a report that outlines his pervasive use of racist, sexist and anti-Semitic invective against his own employees. While he called the report “humbling, hurtful and disappointing for all involved,” what was hurtful was not the report but his egregious treatment of his subordinates.

DESPERATE TIMES, DESPERATE APPEALS: Len Lazarick, in a column for MarylandReporter.com, asks:Do desperate campaign fundraising appeals work? The folks at the Democratic Congressional Campaign Committee apparently think so, and have been doing it for years, according to published accounts.In just the past week, as the Sept. 30 report filing deadline approached, I got over 40 emails from the DCCC with subject lines that included “We’re BEGGING,” “We’re losing,” “Trump WINS,” “TRUMP.WINS.EVERYTHING” and “throw in the towel.”

INTERVIEW WITH ALAN WALDEN: In this podcast, Jonathan Munshaw of the BBJ interviews Alan Walden, Republican candidate for Baltimore City mayor. He says he is not attempting to ride on the popular coattails of Gov. Larry Hogan to win the mayor’s race but cares about Baltimore City and the issues that affect it.

DEADLY BALTIMORE: Increasingly, people are shooting to kill, Justin George reports in a multi-part expose for the Sun. Criminals are stockpiling higher-caliber guns, many with extended magazines that hold more than 20 bullets. Police and hospitals are seeing a growing number of victims who have been shot in the head or shot repeatedly. And trauma doctors are finding it more difficult to save gunshot victims. In many places, if you get shot, you are more likely to die than ever before. In Baltimore, one of every three people struck by gunfire dies, up from one death in every four shootings the previous decade. It ranks as one of the most lethal of America’s largest cities.

PG RESIDENTS SUE COUNTY OVER TAXES: Two Prince George’s County residents say the county government broke the law and circumvented a long-standing tax cap when elected officials raised property taxes more than a year ago, according to a lawsuit filed Friday. Arelis Hernandez reports in the Post that plaintiffs Fred Price Jr. and James K. Wass, members of the Republican Party Central Committee, filed a complaint in Prince George’s Circuit Court arguing that the tax-increase measure should have been placed on the ballot for voters this November.

VA TO OUTSOURCE MEDICAL EXAMS: The U.S. Department of Veterans Affairs, which has struggled to eliminate a backlog of disability claims, is planning to outsource more of the medical exams that are key to determining benefits. The effort could cost more than $1 billion per year, reports Ian Duncan in the Sun. The department says such a move could make it easier for veterans in remote areas to be seen, and speed up payouts.