BLACK CAUCUS GOES AFTER POT LICENSING: The Legislative Black Caucus plans to use any means necessary to stop Maryland’s medical marijuana commission from issuing final licenses until more are awarded to minority-owned businesses, writes Erin Cox of the Sun. “We will not be accepting crumbs,” Del. Cheryl Glenn, chair of the caucus, said Friday at a forum in Annapolis.

MENTAL HEALTH AID FOR DEFENDANTS: State legislators for three committees will meet this week to seek a solution to a growing problem in Maryland involving criminal defendants needing psychological evaluations and treatment that one judge has warned could result in the release of people charged with murder, Bryan Sears reports in the Daily Record.

NEW WAYS TO PAY CHANCELLOR: University of Maryland officials are scrapping bonuses for the system chancellor after a $75,000 bonus to Chancellor Robert L. Caret drew scrutiny from state lawmakers, Fenit Nirappil reports for the Post. The system’s Board of Regents on Friday voted unanimously to remove performance bonuses from the chancellor’s compensation package. But the move likely won’t amount to a pay cut because university officials plan to increase his compensation in other ways.

FICKER NO DEFENDANT IN CHALLENGE: Robin Ficker, who is spearheading a drive to impose term limits on local politicians, will not be a defendant when a challenge to his effort is heard in Montgomery County circuit court. Ficker, a lawyer, is seeking to limit the Montgomery County executive and members of the County Council to three terms, Doug Tallman of Bethesda Beat reports.

BA CO WARNS WORKERS OF ONLINE BEHAVIOR: As the political season heats up, Baltimore County is warning government employees that it plans to enforce a long-standing policy against “brutal or offensive” behavior in the workplace and on private time, including on social media. County officials say the increasing coarseness of online behavior, particularly about the presidential election, led them to remind employees of the policy and require supervisors to implement it, Pamela Wood and Alison Knezevich report in the Sun. 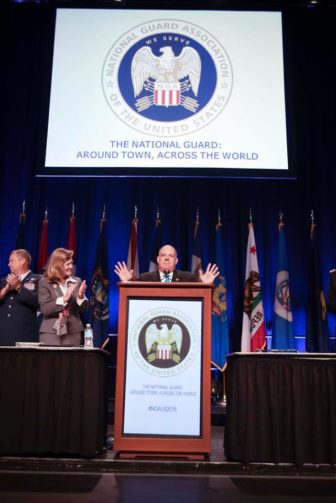 TRUMP IN BALTIMORE: Republican presidential nominee Donald Trump will come to Baltimore today to address National Guard leaders as he wrestles with the fallout from recent remarks he has made about U.S. military leaders and Russian President Vladimir Putin, John Fritze writes for the Sun.

A COLUMNIST AGAINST HOGAN: Political pundit Barry Rascovar writes in MarylandReporter.com that for all his popularity, Gov. Larry Hogan has an abysmal relationship with Democrats who run the General Assembly. Worse, he seems determined to keep it that way into his next term. Hogan can point to few legacy achievements.

PREZ GOLFS WITH PLANK: President Barack Obama was back on the links in Baltimore County Saturday and he had a familiar golf partner — Under Armour founder Kevin Plank. The president also golfed with Plank on the tony Caves Valley Golf Club this spring. Spokespeople for Plank and Obama have previously declined to say who won, Natalie Sherman writes in the Sun.