Some of the union demonstrators against Wisconsin Gov. Scott Walker at Michael's Eighth Avenue in Glen Burnie. 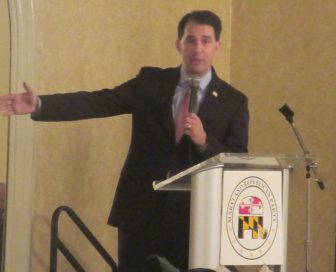 Wisconsin Gov. Scott Walker felt right at a home in Glen Burnie Friday night for the annual state Republican’s Red White and Blue dinner. Union members were picketing him outside.

“Obviously, I haven’t lost my touch,” Walker joked, referring to the massive demonstrations he generated in Wisconsin’s capital in 2011 when he tried to cut back on collective bargaining rights of public employee unions and raise their pension contributions.

As opposed to the thousands that picketed him in Wisconsin, there were several dozen demonstrators organized by both public and private sector unions.

Their chants included: “Hey hey, ho ho, Scott Walker has got to go.”

Their hand-lettered signs said “Walker Not Welcome” and “Walker Go Home,” including one that said, “And Take Hogan With You.”

But Walker couldn’t take Gov. Larry Hogan anywhere, since the Maryland governor was again a no-show at the GOP dinner, as he was last year when Donald Trump was the speaker.

That didn’t keep Walker from praising Hogan and his high popularity ratings — 71% in a poll last week. “That’s remarkable in any state,” Walker said. Among Republican governors, who now hold office in 31 states, “We get a kick out of Larry Hogan … because he shows what we can do” in a Democratic blue state like Maryland.

“Your governor, with your help, is going to win reelection,” Walker told the crowd of about 300, less than half that heard Trump in June 2015.

But Walker was only available to come to Maryland last Friday — the same evening as the annual crab feast for Anne Arundel County Executive Steve Schuh only a few miles away. That event was sold out with more than 900 tickets bought.

Walked portrayed his record in Wisconsin as one where they were able to sweep out the Democrats who held all the statewide offices in 2010.

However, while Wisconsin consistently votes Democratic for president, Republicans now control both houses of the state legislature and have passed anti-union legislation, including a right-to-work law Walker signed which prohibits workers from being forced to join a union.

While Hogan has been critical of public employee unions, he has introduced none of the kind of legislation that drew the protests against Walker in Wisconsin.