HOGAN ASKED TO SPEAK ON GRUMMAN GRANT: Maryland’s top legislative leaders want to hear directly from Gov. Larry Hogan (R) before deciding the fate of a $20 million grant to defense giant Northrop Grumman that has become mired in an unrelated spending fight, reports Josh Hicks in the Post.  But Hogan spokesman Doug Mayer said the governor has “no interest in attending a meeting to discuss an issue that was unanimously approved by both the Senate and the House six months ago.”

RX POT MAY FACE MORE DELAY: The head of the state’s medical marijuana commission said Tuesday the panel has not ruled out further delay to the program to ensure racial diversity among cannabis business owners, reports the Sun’s Erin Cox. “Nothing is off the table,” Maryland Cannabis Commission chairman Paul Davies said after meeting with Attorney General Brian Frosh Tuesday afternoon.

BAKER PUSHES ON FBI HQ: Prince George’s County Executive Rushern Baker is pushing Maryland’s congressional delegation to get a decision on a new FBI headquarters before the end of the year — while the Free State has the clout. Because come 2017, Maryland will lose one of its staunchest advocates in Sen. Barbara Mikulski, D, and Virginia could gain a heavy hitter if Sen. Tim Kaine becomes vice president, Daniel Sernovitz of the Washington Business Journal reports.

HOGAN ALWAYS WINS: Political pundit Josh Kurtz, in Center Maryland writes, “Say this for Gov. Larry Hogan (R): He finds a way to spin every single policy debate into political gold. Hogan’s latest move, ordering public schools across the state to open after Labor Day and close by June 15, was done with his typical brute efficiency and simplicity. This is a complex and textured issue, to say the least, but not for Hogan. He’s right, his critics are wrong, and in his view they should be prepared to suffer the political consequences. Probably they will.”

HOPE FOR MAGLEV: No one will ever accuse Wayne Rogers of being a pessimist, writes Adam Bednar in the Daily Record. Rogers, chairman of Baltimore-Washington Rapid Rail, which wants to build a magnetic levitation train that travels 300 mph and moves passengers between the two cities in 15 minutes, believes the project could break ground in as little as three to four years. 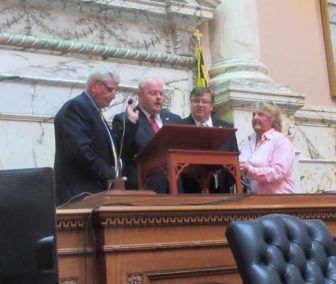 JOE CLUSTER SWORN IN AS DELEGATE: Baltimore County Republican Joe Cluster was sworn in Tuesday as a member of Maryland’s House of Delegates, replacing his father, John Cluster Jr. who resigned to serve as a member of the state’s parole commission, Josh Hicks of the Post reports. Joe Cluster, 37, has been executive director of the Maryland Republican Party since 2013.

DELANEY ISN’T RUNNING FOR GOV: Since the upset victory of Republican Gov. Larry Hogan nearly two years ago, the assumption bordering on conventional wisdom in state political circles has been that 6th District Rep. John Delaney of Potomac will be among the Democrats vying to take on Hogan for a second term in 2018. But, reports Louis Peck for Bethesda Beat, as Delaney gears up for a third term bid against a well-funded Republican challenger in what is likely to be the most competitive race in the state this November, Delaney is doing his best to pour cold water on such speculation.

VAN HOLLEN LEADS SZELIGA: Rep. Chris Van Hollen (D-Md.) leads state Del. Kathy Szeliga (R-Baltimore County) by a wide margin in the race to replace retiring Sen. Barbara A. Mikulski (D-Md.), according to a Maryland poll released Tuesday. The survey, conducted by Annapolis-based OpinionWorks, shows that 55% of likely Maryland voters would cast their ballots for Van Hollen, compared with 26% for Szeliga, who is the state House minority whip, Josh Hicks reports for the Post.

BARTENFELDER ON FARMING: John Lee of WYPR-FM writes that Maryland farmers feel that they targeted for criticism over runoff pollution in the Chesapeake Bay. Agriculture Secretary Joe Bartenfelder, himself a farmer, agrees. Lee talks with Bartenfelder about the situation.

OYSTERS THRIVE UNDER THE GUNS: Unlike in Maryland, where oyster sanctuaries are protected by the state but a fisherman might not mind risking fines to dredge up the jewels of the Chesapeake Bay, in Virginia, old, teeming oyster sanctuaries are under the guns of the Naval Station Norfolk, where dredging in those waters would be even more risky, writes Bay Journal Service reporter Tom Horton in MarylandReporter.com.

KAINE FUNDRAISING IN MD: Democratic vice presidential candidate Tim Kaine will be in Maryland today for a fundraiser hosted by David Trone, the wealthy businessman who ran an expensive yet unsuccessful campaign for Congress this year. John Fritze of the Sun writes that tickets for the Montgomery County event start at $1,000, according to an invitation obtained by The Sun. To stick around for dinner, though, attendees will have to cough up at least $27,000.

WA CO MIGHT CUT SPRING BREAK: Washington County Public Schools Superintendent Clayton Wilcox said Tuesday that one change that will probably be made for next school year’s calendar is the elimination of spring break, Julie Greene reports for the Hagerstown Herald Mail. After a Washington County Board of Education meeting, Wilcox said that students and staff might only have a three-day spring weekend in the face of a post-Labor Day school start.

AA COUNCIL SEEKS CHANGE IN TRANSGENDER GUIDELINE: Republicans on the Anne Arundel County Council are asking school board officials to reconsider a recent set of guidelines allowing transgender students to use the bathroom that matches their gender identity. Tuesday, at its first meeting back after the August recess, the council voted 4-2 to endorse a resolution requesting that the Anne Arundel County Board of Education adopt a policy on use of bathrooms, locker rooms and other gender-divided spaces, Amanda Yeager reports for the Annapolis Capital.