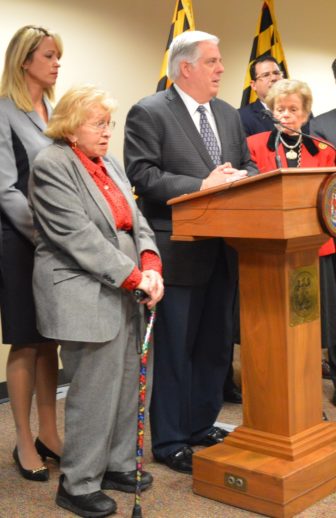 Helen Delich Bentley with cane stood next to Governor-elect Larry Hogan as he announced his transition team in November 2014.

HELEN BENTLEY DIES: Helen Delich Bentley, the colorful and cantankerous former Maryland congresswoman whose fierce advocacy for the port of Baltimore led to its being named in her honor, died Saturday, reports Michael Dresser for the Sun.  Mrs. Bentley, who was 92, died at her home in Timonium, said longtime aide Key Kidder. She had brain cancer.

MOVING ON RX POT: Erin Cox of the Sun reports that three years after Maryland first legalized medical marijuana, the state’s Medical Cannabis Commission on Friday picked which companies will get to launch the industry.  But it will be months before final approvals are granted, and the drug won’t be available to patients until next year, after those companies clear final regulatory hurdles — and provided that the selection system doesn’t get held up in litigation.

HOGAN CALLS THEM ‘THUGS:’ Gov. Larry Hogan reacted Friday to opponents of his decision not to fund two education-related programs by calling some of the critics “union thugs.” Hogan’s jab came a few hours after the Maryland State Education Association joined with Sen. Richard Madaleno and the ACLU of Maryland in issuing a news release calling on Hogan to withhold money intended for private school scholarships as long as he was declining to spend $25 million the General Assembly earmarked for the two programs. Michael Dresser of the Sun writes that the MSEA is the state’s largest union representing teachers.

POWER LINE PLAN SUSPENDED: The utility grid operator that serves Maryland and 12 other states on Friday suspended plans to build a power line that Gov. Larry Hogan opposed because he was concerned it would drive up electrical rates for some Maryland residents, Michael Dresser reports in the Sun.

HOGAN SPEAKS AT URBAN LEAGUE CONFAB: Gov. Larry Hogan called Friday for a bipartisan approach to solving problems in American cities as he welcomed almost 800 participants to the National Urban League’s annual convention in Baltimore City, Michael Dresser reports for the Sun. “We must seek to empower and not to demonize,” the governor told those assembled for the civil rights organization’s gathering at the Baltimore Convention Center.

TRANSGENDER TWINS: Kate Ryan of WTOP-AM writes a long piece about transgender twins in Maryland, how they were born female, but never felt right, and grew up and dealt with always feeling like outsiders. The two also talk about what their experiences now in the state are like, and address such through the controversial “bathroom issue.”

DON’T BOTHER: All those attempts to dissuade Trump voters with “facts” may have exactly the opposite effect, reinforcing their beliefs. This column by David Ignatius in the Washington Post  examines the research on the psychology behind the phenomenon.

TAX FREE WEEK: Consumers can save money by shopping during Maryland’s Tax-Free Week, and the time has turned into a critical period for retailers, too, writes Mike Lewis for the Hagerstown Herald Mail. “Back-to-school shopping season is easily our second-busiest time of year after holiday shopping,” Angie Riford, director of marketing and business development for Hagerstown Premium Outlets, wrote in an email. “We look forward to Tax-Free Week every year because of the extra savings we can offer our shoppers.”

is declining to support stricter firearms laws, despite meeting with gun-control activists last week and strong backing for such measures from Maryland voters. Szeliga, the state’s House minority whip, did not budge from her position on the subject when she met Thursday with activists and victims of gun violence.

ELIMINATING ‘GIFTED & TALENTED’ LABEL: If you don’t label the smartest kids “gifted and talented,” will they still get the education they deserve? Liz Bowie of the Sun writes that that is the question in Baltimore County, where school Superintendent Dallas Dance has proposed eliminating the name in a new policy — the latest move in a larger shift in how the district educates some of its brightest students. For some parents, it’s a move that goes too far.

CITY MINIMUM WAGE HIKE: In a vote that is expected to be close, the Baltimore City Council is scheduled tonight to consider whether to raise the city’s minimum wage to $15 an hour by 2022. The bill’s lead sponsor, Councilwoman Mary Pat Clarke, expressed hope she has persuaded a majority of her colleagues to back the measure, the Sun’s Luke Broadwater reports.

TERM LIMITS IN MO CO: Just before the Montgomery County Council began its summer recess Tuesday, it approved resolutions paving the way for a term limit question on the November ballot that could force as many as five members from the council in 2018, reports Andrew Metcalf for Bethesda Beat.