BPW OKS SETTLEMENT: The Board of Public Works approved a settlement Wednesday in a lawsuit brought by the parents of a Frostburg State University football player who died of head injuries suffered on the practice field. Maryland will pay $50,000 to a foundation named for Derek Sheely, a 22-year-old fullback who collapsed in 2011 after preseason drills and died six days later following massive brain swelling, Michael Dresser reports for the Sun.

HOGAN QUESTIONS CITY SCHOOL RENOVATIONS: Gov. Larry Hogan Wednesday expressed concern that the city is using state money to renovate old schools slated for demolition in the near future as part of an unprecedented $1 billion, 10-year plan to modernize the city school facilities that involves the Maryland Stadium Authority. Comptroller Peter Franchot also questioned whether the city has failed to spend more than $100 million in previously approved renovation funds, reports Bryan Sears for the Daily Record. 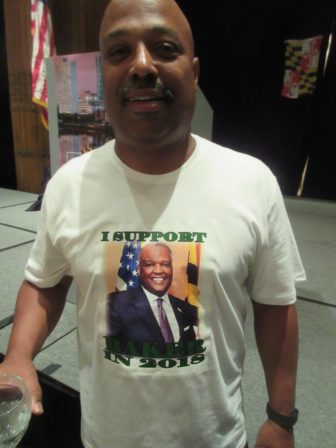 Calvin Hawkins, a political operative from Prince George’s County, sports a Rushern Baker in 2018 at Maryland luncheon in Philadelphia.

BAKER BLASTS HOGAN AT CONVENTION: Prince George’s County Executive Rushern L. Baker III (D) used a speech to Marylanders at the Democratic National Convention on Wednesday as an opportunity to bash Republican Gov. Larry Hogan, the latest sign that Baker is weighing a run for the state’s top office in 2018, Arelis Hernandez reports in the Post. Other potential Democratic gubernatorial candidates making the rounds at the convention include U.S. Rep. John Delaney and Baltimore County Executive Kevin Kamenetz.

M O’M ADDRESSES DEMS: Former Gov. Martin O’Malley, appearing on a national stage for the first time in months, delivered a blistering attack Wednesday on Republican presidential nominee Donald Trump at the Democratic convention, John Fritze of the Sun reports. O’Malley, who ended his presidential campaign in February after finishing a distant third in Iowa, said Democrat Hillary Clinton and her running mate, Sen. Tim Kaine of Virginia, were “as tough as they come,” and then pivoted to Trump.

FREDDIE GRAY REACTION: Despite the absence of successful prosecutions, reports Steve Lash in the Daily Record, Freddie Gray’s death from injuries sustained in custody in Baltimore will continue to prompt changes in the conduct of policing in the city and the state, Maryland legislators said Wednesday.