OYSTER POLICY MAY CHANGE: Amid an experiment to bring Maryland oysters back from the brink, the administration of Republican Gov. Larry Hogan is reconsidering strategies launched in 2010, reports Scott Dance in the Sun. The approach cordoned off some of the bay’s oyster population from dredges and oyster tongs, built new habitats atop artificial reefs and also provided a reproductive boost by artificially growing young oysters and spreading them in the bay. 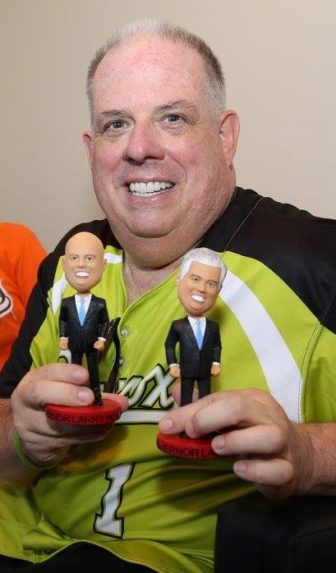 Gov. Larry Hogan with the two bobbleheads at Sunday’s game. From the governor’s Facebook page.

HAIR BOBBLEHEAD WINS: It’s Election Day Sunday at a minor league baseball stadium in Bowie, where fan preference for the governor’s hairstyle was up for a low-stakes contest to benefit a cancer charity.  Gov. Larry Hogan had agreed to have two bobbleheads crafted in his image as a marketing gimmick, reports Erin Cox in the Sun. One sports the gray wave of hair he wore when voters catapulted him to office in 2014. The other has a bald dome like the one he had last summer while battling cancer.  Before 2 p.m., the “Hair Bobblehead” was declared the winner in a Baysox tweet.

I-81 WIDENING SOUGHT: In an open letter to Gov. Larry Hogan, Chris Motz of the Greater Hagerstown Committee writes in the Hagerstown Herald Mail that the state development a formal plan to widen a 12-mile stretch of I-81 in Washington County. “This critical transportation project is long overdue and our community has been unified in advocating for these improvements for nearly three decades,” he writes.

ALL-MALE CONGRESSIONAL DELEGATION: The AP’s Brian Witte writes at WTOP-AM that Maryland has been among leading states in electing women to political offices for decades, but the state could have its first all-male congressional delegation in more than 40 years unless at least one of two Republicans or a third-party candidate wins in November in the heavily Democratic state.

GANSLER SAYS HE’S URGED TO RUN: Former Attorney General Doug Gansler said Friday he’s asked “pretty much every day” if he would consider running against popular Republican Gov. Larry Hogan in 2018. “There’s a lot of discussion regarding the popularity of the governor, and the Democrats are sort of looking around for the most viable candidate to beat the governor,” Gansler, a Democrat, said in an interview about his plans, Erin Cox reports for the Sun.

***SEEKING ASSESSMENT ADMINISTRATORS: Seeking motivated individuals to proctor assessment sessions with 4th- and 8th-grade students in schools for the National Assessment of Educational Progress. Must be available to work January 30 –March 10, 2017. Paid training, paid time and mileage reimbursement for local driving, and weekly paychecks. This is a part-time, temporary position. To apply, visit our website at www.westat.com/CAREERS and select “Search Field Data Collection Jobs.” Search for your state, find the NAEP Assessment Administrator position, and select the “apply to job” button. For more information email NAEPrecruit@westat.com or call 1-888-237-8036.***

FRANCHOT, VAN HOLLEN LINE UP BEHIND CLINTON: Robert Lang of WBAL-AM interviews both Comptroller Peter Franchot and U.S. Rep. Chris Van Hollen, both Democrats, about their intention to attend the Democratic National Convention in Philadelphia this week.

READY FOR DEMS CONVENTION: Frederick County Democrats are focused on party unity and the historic nomination of a woman candidate for president ahead of the party’s national convention in Philadelphia this week, reports Danielle Gaines for the Frederick News Post. “I just wanted to be there for this historic moment,” said Myrna Whitworth, chairwoman of the Frederick County Democratic Central Committee, who is among a small group from Frederick traveling together to the convention as observers. “I’m very excited about her nomination.”

‘FEAR THE DONALD:’ Columnist Barry Rascovar, writing in MarylandReporter.com, says what draws Democrats together faster than anything – be they Bernie Sanders delegates or Hillary Clinton supporters – is the pit-in-the-stomach fear Republican nominee Donald Trump, whose over-the-top rants have made him a lightning rod of controversy, will somehow win the November presidential election.

McKESSON VETTED AS DNC SURROGATE: Baltimore civil rights activist and former mayoral candidate DeRay Mckesson was vetted as a possible surrogate for the Democratic National Committee, according to internal party emails published by WikiLeaks, Tim Prudente reports for the Sun.

DEMS DEFEND B’MORE FROM TRUMP: Maryland Democrats rose to the defense of Baltimore on Friday after Republican presidential nominee Donald J. Trump spoke of violence in the city during his acceptance speech at the GOP convention. Trump cited a 60% increase in killings in Baltimore last year. Homicides are down 7% this year. Jessica Anderson of the Sun writes that Rep. Steny Hoyer said Trump “can mention Baltimore all he wants. It is rhetoric, not substance.”

SENATE RACE COFFERS: Both major party candidates running for Maryland’s open Senate seat reported raising less money to the Federal Election Commission in their most recent disclosure report than they informally suggested, a discrepancy that appears to have been caused by a quirk in the reporting schedule, John Fritze reports in the Sun. Democratic Rep. Chris Van Hollen raised $1.5 million from April 7 to the end of June, about 18% less than the $1.8 million his campaign touted in a press release. Republican Del. Kathy Szeliga reported raising $463,000, about 20% under the $582,170 the campaign initially distributed.

LEGGETT INTERVENES ON LABOR BILL: Montgomery County Executive Ike Leggett has asked Council President Nancy Floreen to postpone consideration of her proposal to give more power to county officials in their dealings with labor unions. Floreen (D-At Large) described the bill, which she introduced last month on a fast-track basis, as an attempt to bring “balance” to negotiations with the unions representing county police, fire and general employees. It would open portions of the traditionally private process to the public and permit use of neutral third parties without bargaining experience. 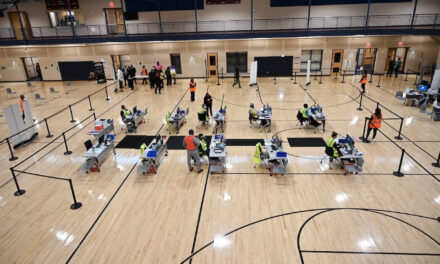